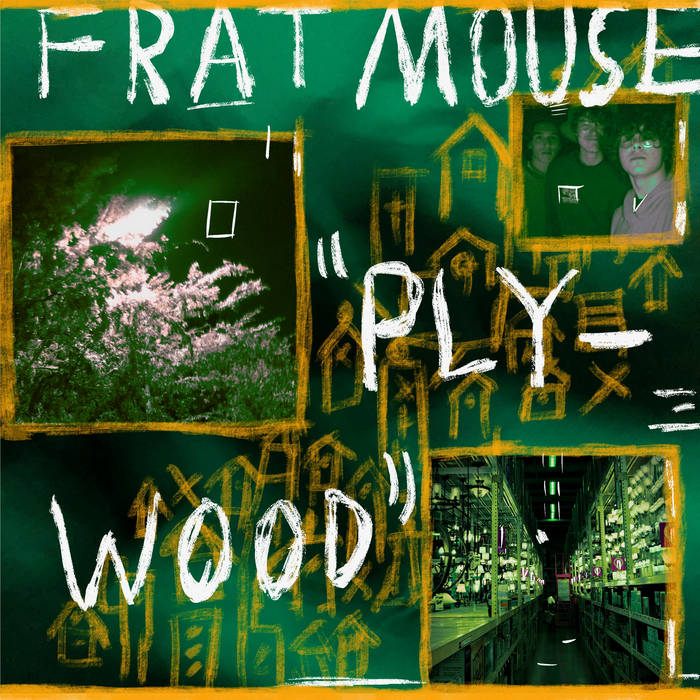 Truman Sinclair and Griffin Meehan were just becoming friends when they formed Frat Mouse in 2019. They went to two concerts together to see their favorite artists at the time, Abhi The Nomad and Mom Jeans respectively. When they were seeing the latter, they said “we gotta do this!” and Frat Mouse was born. Their first single, “bo2 zombies,” was a direct product of this spirit. They posted the song’s modest curbside rendition music video to an indie subreddit and blew up that December. On January 5th of 2020, they released their debut album, Rat Pack, which Griffin describes endearingly as “Mom Jeans fan fiction.” A few days later, music YouTuber Alfo Media featured Frat Mouse in one of his videos, kindling a friendship between Alfo Media and Frat Mouse as well as garnering more attention towards the release. A few months later, Frat Mouse released their sophomore effort, The Frag Movie, followed by the cattle rat EP that summer.  On January 5th or “Frat Mouse Day,” exactly a year after Rat Pack, Frat Mouse released their third album, Plywood.

Although a mere 365 days have passed since the release of their debut, Frat Mouse has developed a lot and has three albums to prove it. Each album represents a different point in their lives, according to Truman: “Rat Pack is so high school, unbelievably high school,” while “Frag Movie is such a product of I just graduated.” In the Plywood era, they find themselves in a “limbo state of not really being an adult and still being treated like a high schooler,” notes Griffin, the bassist, manager, and occasional screamer of Frat Mouse. This awkward stage has yielded what Truman and Griffin agree is their most mature record to date. In addition, Truman, who is studying music production at USC, continues to hone his production skills on Frat Mouse releases: “As I get better, the records obviously sound better.” Truman, the guitarist, singer, and main writer for the project, has produced all the music. In fact, Truman submitted many finished mixes from Plywood as school assignments. Truman wants to reassure fans that Plywood still has a few “emo bangers” and that despite its maturity, it’s not “really bad dad rock.”

Along with being the most mature Frat Mouse release, it is also the heaviest, partially because this is the first Frat Mouse release to feature live drums. The drums on the first two records were programmed by Truman, but Plywood includes live drums from drummer Ben Lopez. Because so much has changed, Griffin says that Plywood is “not even comparable” to the first two albums and is “all over the place” stylistically. The cohesion comes from Truman’s production: “The thing that really ties it together is just how it sounds.” Truman describes the sound of Plywood as “us playing in a garage as opposed to us just recording things into Logic.” Griffin and everyone else in the band agree that Plywood is “probably the peak level of what we can make right now,” adding that “all of us have never been more proud of anything we’ve made in our entire life.”

For Frat Mouse, the first three albums represent a trilogy, with Plywood signifying the end of act I. Although Plywood is totally different from Rat Pack, Truman still sees it as a “spiritual successor” to their debut, which is why it was released on the same day and has a similar color scheme: “we wanted it to be that kind of big brother to rat pack to see how far we’ve come,” Truman says. To commemorate the occasion, Frat Mouse announced that they are doing a vinyl pressing of Rat Pack and cattle rat on vinyl. All the profits will go towards touring, whenever that is possible. Truman and Griffin remain optimistic for the summer, when hopefully everyone will be vaccinated.

The band started as just two friends bonding over music and is now a whole operation with a national following. The Frat Mouse team, along with Truman, Griffin, and Ben, includes a number of contributors. Griffin met Emiko—who makes excellent music under the moniker Cali Flora— and Keaton at an animation camp in 2018. Both of them assist the band with cover art and illustrations. Truman met Amanda through his friends from Chicago, where he used to live before his freshman year of high school. Amanda is studying Music Business at Belmont, so she helps the band with promotional content, mainly on Tik Tok.

The record reflects the growth of both the band members and the project itself. As Truman puts it, Plywood asks “who am I gonna be in real life?” He continues: “You really have to figure out how you want to act and how you want to compose yourself in the real world.” As far as answering that question goes, Frat Mouse have kicked off this new and strange time in their lives with a great album.