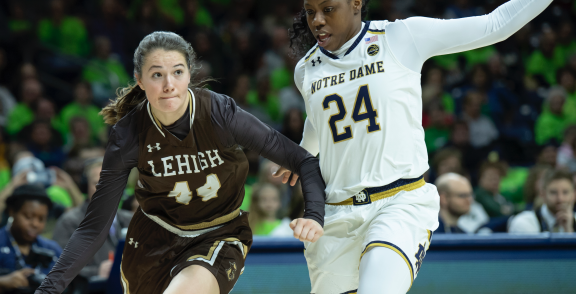 The divide between the Patriot League’s top teams and the rest of the crowd widened in the first few games of the season — Bucknell and BU looked stronger than ever, while other teams in the conference erased any doubt that they face a year of rebuilding.

Finding themselves in between are Lehigh, Lafayette and American. Lehigh and Lafayette faced off in arguably the most contentious opening series of the weekend, although the Mountain Hawks ultimately came away with a 2-0 sweep. While American did not get the chance to play this weekend due to a  postponement of their games against Loyola Maryland, the Eagles still figure to be among the top squads in the Patriot League throughout the season.

The Bison faced a sudden schedule change when the league bypassed Navy’s matchup against Loyola Maryland due to a positive test within the Navy program. The Greyhounds became this week’s matchup, but the new opponent did not faze Trevor Woodruff’s squad.

Bucknell held the Greyhounds to just 44 points in each game while winning both contests by double digits. Tessa Brugler dominated the interior in Game 1 of the series, while Taylor O’Brien averaged 16 points per game across both contests. The Bison didn’t even shoot well — just 38.5 percent from the field on the weekend. But they controlled the glass (44.5 rebounds per game) and played suffocating defense. It’s pretty scary that a “meh” weekend led to two convincing wins.

This week: January 9 at Lafayette, January 10 vs. Lafayette

Marisa Moseley and the Terriers did everything they could to match Bucknell’s pace. BU cruised through the young Holy Cross Crusaders with two 70-plus-point efforts. Preseason All-Patriot League nominee Katie Nelson is starting her senior year on fire, shooting over 68 percent from the floor to average 18.5 points per game, with 11 assists against just three turnovers.

Villanova transfer wing Emily Esposito is the new member in the starting lineup. She’s working through some shaky shooting so far, but looks confident in the mid-range while also hustling on the glass. As she gets comfortable in the starting five, look for BU’s notoriously stingy defense to click. — Ethan Fuller

This week: January 9 at Colgate, January 10 at Colgate

Mary Clougherty is @LehighWBB's first #PatriotWBB Player of the Week since 2017-18! She averaged 21.5 ppg in wins over Lafayette and currently paces the nation in 3FG made per game (4.5).

Bucknell and Boston U. may be the league’s top tier, but Lehigh might be on the verge of a breakout. The Mountain Hawks faced Lafayette in the most competitive series of the weekend and won twice, including a thrilling overtime triumph in the league’s season-opening game. Mary Clougherty won Player of the Week despite coming off the bench by putting up 23 and 20 points in each game. Junior guard Claire Steele has made her presence felt in the starting lineup; the 5-foot-5 guard managed 12 points, 3.5 rebounds, 3 assists and 3 steals per game over the weekend.

This week’s matchup against American University is a serious test for the Mountain Hawks. AU has yet to play this season after its schedule was shuffled around, but the Eagles have a stronger supporting cast for their start than the Leopards. This should test the Mountain Hawks starting five. — Ethan Fuller

This week: January 9 at American, January 10 vs. American

American was unable to begin its season on time while the program awaited required COVID-19 testing results. The Eagles’ scheduled opponent, Loyola MD, was rescheduled to play Bucknell instead.

While American University athletic personnel have not released more information as to the team’s testing results as of January 4, the team’s series against Lehigh next weekend still appears to be a go. The series will give us a first look at Preseason All-Conference selection Jade Edwards, who could factor into the Player of the Year conversation if she continues the upward trajectory she began last season. — Hannah Yoshinaga

This week: January 9 vs. Lehigh, January 10 at Lehigh

Lafayette forward Natalie Kucowski was a monster at the rim and on the glass last weekend; on Saturday, she torched Lehigh for 16 points, 21 rebounds, seven assists, three steals and four blocks and on Sunday, she had 15 points, 13 rebounds, five assists and two blocks to her name. However, despite Kucowski’s inhuman performance, the Leopards still find themselves in a 0-2 hole to begin their season.

Lafayette simply relies too heavily on Kucowski, who shouldn’t be expected to drag the team through a two-and-a-half month season, particularly at the end of games when she can be doubled in the post. While effective three-point shooter Drew Freeland stepped up over the weekend, the other eight members of the Leopards’ rotation need to do the same. — Hannah Yoshinaga

This week: January 9 vs. Bucknell, January 10 at Bucknell

A 30-point performance by Keelah Dixon of @ColgateWBB, plus Jordan Burns of @ColgateMBB who became second all-time in career assists in a 20-point game.

We’ve got two ball players for our first Student-Athletes of the Week in 2021! #GoGate pic.twitter.com/duym9LTX1D

There are no two ways around it — this year’s Colgate squad is a far cry from the one that was a force in the conference for the majority of last season.

The Raiders still offer plenty of potential, which was put on display on Saturday in their 87-point performance against Army. However, Army’s defense is not particularly strong, and Colgate had plenty of defensive troubles of its own in the contest. On Sunday, Colgate’s offense was especially poor, with only one player making more than three buckets (Keelah Dixon, who was only 5-for-20 in a display of Kobe Bryant-level confidence).

The ‘real’ Colgate likely lies between the two extremes they displayed over the weekend, but it may take some time before we really get a solid idea of how good this team actually is. Buckle up, Raiders fans. — Hannah Yoshinaga

Alisa Fallon and Lauren Lithgow lead @ArmyWP_WBB back from an early deficit to run away with their first @PatriotLeague win of 2021.@ncaawbb | @espn pic.twitter.com/fkGCpkDiTL

While Army’s lackluster defense got picked apart by a relatively inexperienced Colgate squad in their Patriot League opener, they settled in and held the Raiders to a mere 53 points in their game the following day. Any improvement on the defensive end is progress for the Black Knights, who had the league’s worst defense in conference play last year.

Army finds itself in a tough spot for a second year in a row — they shouldn’t finish with the worst record in the conference, but they’re certainly nowhere near the top of the rankings either. The Black Knights must use this year as a way to continue developing their younger players in preparation for team leader Alisa Fallon’s departure at the end of the season.

This week: January 9 vs. Holy Cross, January 10 at Holy Cross

The Crusaders’ inexperience on both ends of the floor showed in their two-game series against BU, and they lost each contest by an average of 19 points. If they want to finish anywhere outside the bottom of the conference standings, they’ll need to solve their inefficiency issues in the paint, and fast — the Terriers torched them down low on nearly every possession, exposing gaping holes in Holy Cross’ interior defense and showing that Oluchi Ezemma and the rest of the Crusaders’ frontcourt have a long way to go when it comes to scoring in the post.

On the bright side, freshman guards Cara McCormack and Bronagh Power-Cassidy were assertive early and showed promise. Holy Cross also got forward and backup center Madison Demski back on the court after she missed all of last season and part of the preseason with injuries, which should help to shore up some of the deficiencies in the frontcourt.

Loyola Maryland deserves some pity, after a last-minute scheduling change moved them from playing American to powerhouse Bucknell last weekend. But the Greyhounds still got rolled against our top team, putting up a paltry 44 points in each loss.

Transfer guard Devyne Newman averaged 10.5 points through the two contests, and looks like a solid starter for the team. Sophomore forward Emily McAteer continues to impress on defense and on the glass. Otherwise, those are about all the positives for a team currently shooting 27.5 percent from the floor.

The Mids did not play last weekend due to a positive COVID test within the program. This might be a blessing in disguise for Navy, who would’ve had a brutal opening series against Bucknell on tap.

We’ll see how they fare against Loyola Maryland in our Battle of the Basement weekend series. If there’s ever a chance for Navy to build some positive momentum, it’s this week.

This week: January 9 vs. Loyola MD, January 10 at Loyola MD