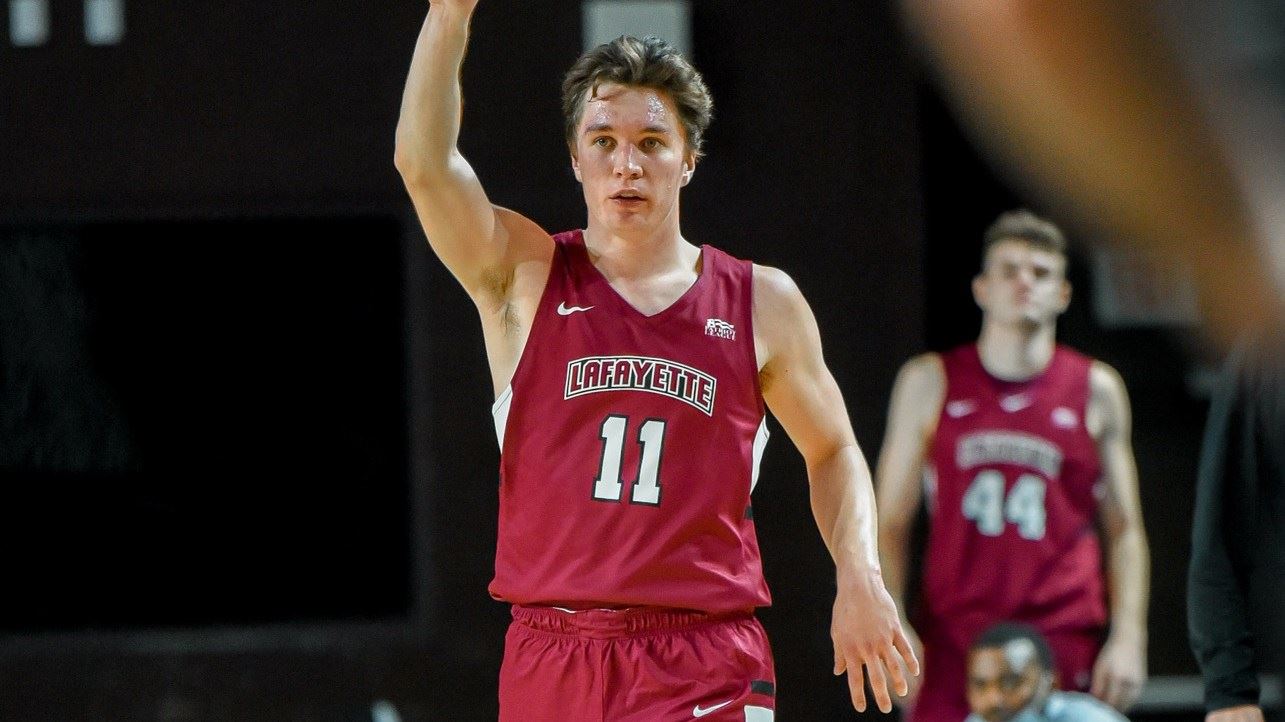 The first weekend of the season didn’t exactly play out as expected, with the consensus top teams in the conference appearing downright vulnerable at several points and some of the lower-ranked squads showing that they won’t be complacent with losing records.

Colgate and BU looked rusty in their opening series against Army and Holy Cross, who were both picked to finish in the bottom four by Patriot League preseason voters. The Black Knights and Crusaders made life difficult on the Raiders and Terriers, and one of those squads made a case to move up a few spots in the rankings.

Colgate had a wild weekend to start off the season, beating Army by 44 points on Saturday but looking fairly pedestrian in a 75-73 loss to the Black Knights the following day.

While the Raiders were bound to go through some ups and downs as they look to replace last season’s dominant frontcourt, their mercurial play on weekend one casts some doubt on the ability of their forwards and centers to string together consistent performances on offense. However, Colgate is in a Patriot League mini-division with teams who are also figuring out which forwards they can trust to take up big minutes, so the Raiders should be OK for now.

To get around uncertainties in the frontcourt, Colgate Head Coach Matt Langel has thus far gone with a four-guard starting lineup and used Jordan Burns, Nelly Cummings and Tucker Richardson heavily. The strategy has paid off, as Jordan Burns put up 20 points and eight assists on Saturday and 19 points and four assists on Sunday. — Hannah Yoshinaga

The defending champs looked rusty in their first weekend series, coming back to beat Holy Cross on the road before going cold in a narrow home loss. But BU flashed potential in its new tandem of bigs. Jack Hemphill put up 14 points per game off the bench and looks like more of a well-rounded offensive threat. Sukh Mathon did not light up the box score, but his mobility and decision-making look much better than last season.

Daman Tate returned from a medical redshirt year to drop a whopping 26 points in the first game. He struggled in the second game, but Tate played crunch-time minutes down the stretch and already appears to be a major piece in BU’s rotation. With a huge back-to-back against Colgate coming up, the Terriers face their first major test of the season. — Ethan Fuller

A head start has clearly helped the Midshipmen, who were the only team to go undefeated in the first week. Cam Davis averaged 22 points in the series versus Bucknell with an attacking offensive mindset. The rest of the starting five struggled offensively, but John Carter Jr., Greg Summers and the rest of the crew should fare better as the season goes on.

One player to watch is freshman guard Austin Inge. The rookie has seen a minutes increase in every game played this season. He has a nose for the ball on defense and solid offensive efficiency. Inge did not win Rookie of the Week, but was one of the more high-impact freshman from the opening slate. — Ethan Fuller

This week: January 9 at Lehigh, January 10 vs. Lehigh

…excuse us. we require just a moment of your time for the…

Although the Leopards lost at the buzzer in overtime against Lehigh on Saturday and split their first two games, Lafayette guards Justin Jaworski and E.J. Stephens looked like the most fearsome duo in the conference over the weekend. Jaworski is the nation’s leading scorer after putting up 37 points, eight rebounds, four assists and three steals on Saturday and 28 points, three rebounds, two assists and a steal on Sunday. Stephens followed suit with 30 points, eight rebounds, an assist and a steal off the bench in the first game and 12 points, three rebounds, three assists and two steals in the second game.

The bigger question mark is what kinds of contributions the Leopards can reasonably expect from the rest of their roster. The player who scored the most points besides those two last weekend was Leo O’Boyle with 14 points, but that was on 3-11 shooting in what was otherwise a rather forgettable day at the rim for the sophomore. — Hannah Yoshinaga

This week: January 9 at Bucknell, January 10 vs. Bucknell

Since he was just named @PatriotLeague Rookie of the Week, it's a perfect time to introduce Andre Screen in today's edition of "Get to Know" a Bison, presented by @EvanComHospital. #rayBucknell #TheBisonWay pic.twitter.com/ZCzLb9IjJ9

John Meeks’ absence severely hurt the Bison against Navy. Bucknell shot just 35 percent from the floor across the two losses and no player managed double-digit points in both games. But it’s not all bad for the retooling roster. Freshman center Andre Screen started both games and proved himself as a long and strong interior player, taking home Rookie of the Week honors. Deuce Turner also featured heavily as a newcomer, though he struggled to shoot efficiently.

Against a historically tough Navy defense with four extra games to gel, Bucknell reasonably struggled. This weekend’s series versus Lafayette should offer a better glimpse into the Bison’s offensive ceiling. They’ll need to keep pace with red-hot Justin Jaworski to get in the win column. — Ethan Fuller

This week: January 9 vs. Lafayette, January 10 at Lafayette

Due to a positive COVID-19 test within Loyola’s Tier 1 personnel, this weekend’s doubleheader against the Greyhounds has been postponed. https://t.co/MCFJFZByeP

The Eagles still figure to battle for a playoff spot behind defensive stalwart Stacy Beckton Jr. and sharpshooter Jamir Harris, although they find themselves in what could be the most contentious conference mini-division along with Loyola MD and Navy. The ability of American to lock down those two teams’ stars, namely the Greyhounds’ Santi Aldama and Navy’s Cam Davis, will play a big role in the course of the Eagles’ season. — Hannah Yoshinaga

.@LoyolaMBB‘s games against American (Jan. 2 & 3) and Navy (Jan. 9 & 10) have been postponed, and the program’s basketball activities are currently paused. The program will work with the @PatriotLeague to reschedule the impacted contests.

The  Greyhounds did not play last week, and will not play this weekend as the team paused all activities due to COVID-19 concerns. So the wait for Santi Aldama continues.

In the meantime, Greyhounds fans should be focused on Navy basketball. The Midshipmen are the only active team in the PL South (American is also on pause), and will be a frequent foe this season. –Ethan Fuller

Leading at the half.

The Crusaders were a pleasant surprise in their opening weekend against BU, playing solid full-court defense and making their case for the strongest freshman class in the league. Transfer forward Gerrale Gales and senior guard Austin Butler were a force on offense, leading the Crusaders in scoring and giving BU’s defense trouble in both games.

Freshmen Judson Martindale, Michael Rabinovich, Dajion Humphrey, R.J. Johnson and Bo Montgomery all found their way into the rotation. Martindale earned the start in both contests and burst onto the scene Tuesday with 16 points on 6-of-8 shooting. Montgomery was also stellar, playing lockdown one-on-one defense against some of BU’s most potent scorers. — Hannah Yoshinaga

In case you missed it, @_M_W_II’s buzzer beater was featured by @notthefakeSVP on @SportsCenter Saturday evening 🙌pic.twitter.com/vVmTORRTNi

The Mountain Hawks scored a thrilling win in their season-opening overtime showcase against Lafayette when Marques Wilson canned a buzzer-beater three. Wilson erupted for 28 points in the 90-89 triumph. But Lehigh came back to earth on Sunday, losing 70-82 and again allowing Justin Jaworski to torch the hardwood.

Both games against the Leopards turned into shootouts; this weekend is a totally different test against a tough Navy defense and another prolific scorer in Cam Davis. But one guy the Mountain Hawks could turn to is junior big man Nic Lynch, who… might be the best interior presence in the conference? After so many stellar seniors graduated or transferred in 2020, Lynch has filled in nicely so far. — Ethan Fuller

Lonnie Grayson’s defensive play and finish on the fast break for @ArmyWP_MBB in its win over Colgate is our AWPAA Play of the Week, presented by @USAA.#GoArmy pic.twitter.com/UcnxCAXy9J

After getting blown out in an ugly 101-57 loss at Colgate on Saturday, the Black Knights showed some tenacity on both ends of the floor in a down-to-the-wire 75-73 win over the Raiders on Sunday.

Army struggled mightily on offense in their first game, and no player connected on more than three shots all game long. What was even more concerning was their defense, which enabled three Colgate players to make every shot they attempted throughout the afternoon.

However, Army is a young team asking several new players to take on much larger roles than they typically would, so some growing pains are fully expected. When the Black Knights were more patient and collected on Sunday, their potential was demonstrated and they came away with a well-earned win over one of the top teams in the league. Time will tell whether or not Army can make waves in what looks to be a tough conference mini-division. — Hannah Yoshinaga

This week: January 9 at Holy Cross, January 10 vs. Holy Cross