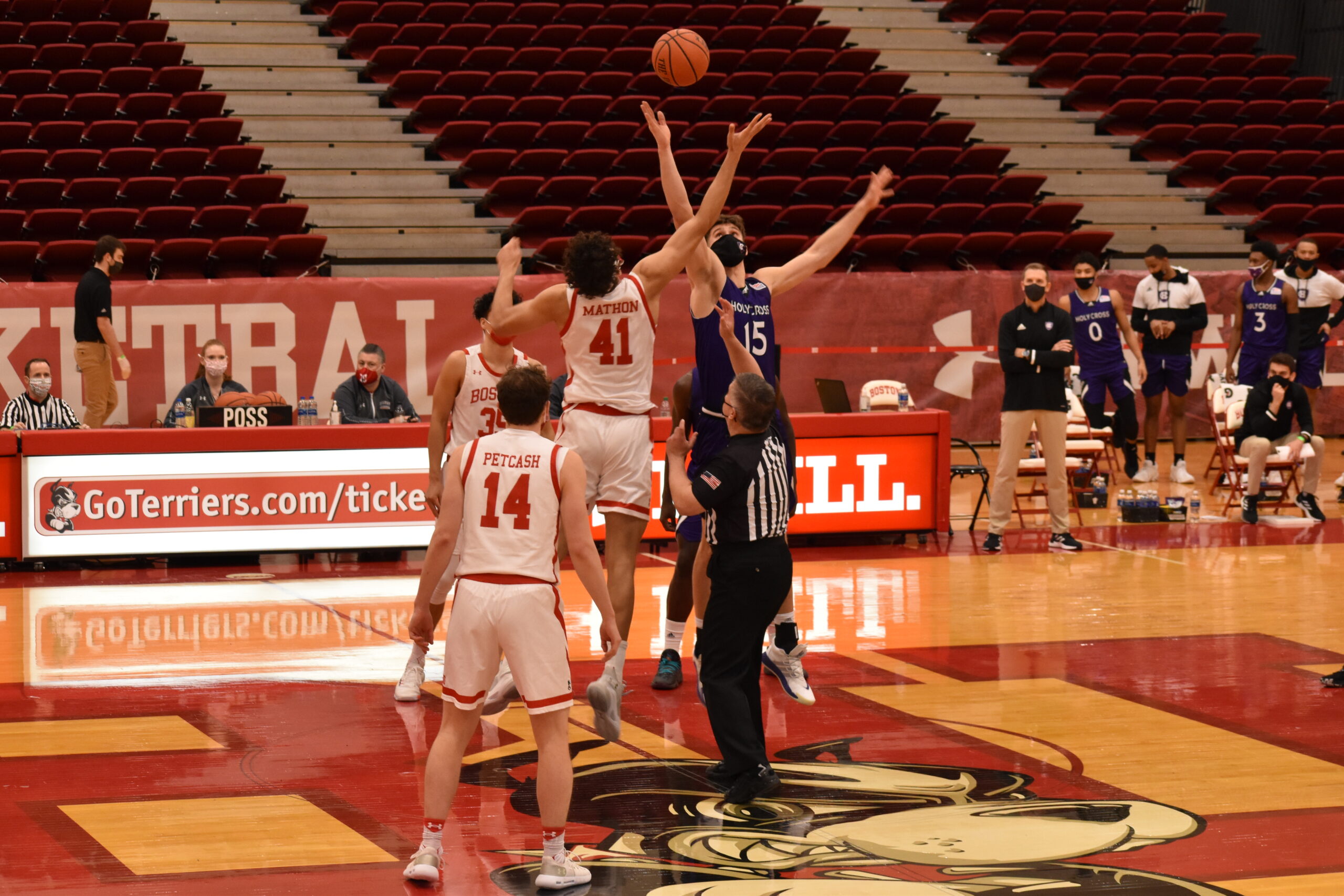 BOSTON, MA — Case Gymnasium’s piped-in crowd noise, created by the Boston University pep band, could not inspire enough offense from men’s basketball on Tuesday, as the Terriers fell 68-66 to Holy Cross in their home opener. The Massachusetts foes split their season-opening series and are each 1-1 on the year.

The two sides played a gritty defensive game, with Holy Cross’ 52-42 lead in the second half proving to be the largest gap of the game. BU found itself in similar holes during Monday’s win, but was not able to pull out enough scoring down the stretch this time.

Jones threw a couple of different looks at Gates, including some double-teams, with moderate success. It took 16 shots for the forward to get his 19 points, but Gates had plenty of chances to score.

“He’s a very good player — got a soft touch, gets off the ground really well, clears space to finish,” Jones said of Gates. “He was able to bounce it and kinda take us off our spot to be able to get the ball where he wanted to. And at time where we’d try to blitz him, we just weren’t there quick enough.”

Butler added 18 points of his own in the Crusader win, while freshman stretch wing Judson Martindale canned six of eight shots to reach 16 points on the afternoon. The Crusaders committed just six total turnovers, and generally had time to move the ball around and find an open look.

“Tonight they were aggressive; they were the better team,” Jones said. “They deserved to beat us. I give a lot of credit to them.”

On the Terrier side, junior big man Jack Hemphill came off the bench for a career-high 16 points and six boards. Hemphill looks much-improved this season; he used a couple of nice post moves to score inside along with his floor-spacing three-ball. Sukhmail Mathon also had a solid outing, with 10 points and five rebounds at the center spot.

But one issue that plagued BU last season is resurfacing: what happens when the three-point shot is cold? The Terriers made just seven of 26 attempts from deep, but most were actually quality chances. Andrew Petcash, Javante McCoy and others had solid looks, but just didn’t have the touch on Tuesday. In 2020, Max Mahoney was there to draw double-teams down low and open up space for others. Now, the pressure is on the Terrier guards to create.

BU had three separate opportunities in the final minute to go up on the Crusaders. The first time, Javante McCoy had a costly turnover coming off a timeout. Then sophomore Daman Tate got the ball, but forced up a bad shot in traffic. The last look had to be rushed from McCoy, with only 3.9 seconds left to run the length of the floor.

“We weren’t able to get [McCoy] with some momentum to go downhill like we wanted to,” Jones said. “There was enough time to try and drive the ball and create something off the dribble, but we just never got going downhill enough.”

Jones has emphasized the “work-in-progress” nature of this season’s start, and it’s evidenced by his rotations. He frequently mixed and matched lineups between the ten players who took the court — including freshman Miles Brewster, who canned his lone three-pointer in his seven-minute debut for the Terriers.

After completing the first back-to-back series of many this year, Jones hopes his team recognizes the energy necessary to power through these games.

“Just mentally, we’re gonna have to fight a lot harder,” he said. “Tonight, we struggled to come out with that kind of fight.”

— BU has a lot of fresh faces in the backcourt and on the wing. That means upperclassmen, such as junior Jonas Harper, have to lead by example. Harper knows the drill, though, because he experienced a similar influx in his first year on the team.

“I’m just trying to show how hard you have to play to get on the court and be consistent,” he said. “I came in with, what, six other freshman, so that’s how I was kind of taught by Javante and other people.”

— National news picked up Boston University’s student-athlete mask requirement. For one day, it became the talk of social media. BU isn’t typically the subject of viral Tweets and Instagram posts, so it was new attention in many ways for the players.

“We just try not to focus on it,” Harper said. “We’re just blessed to be able to play right now, so we tried not to worry about all the social media going on about it and just play our game.”

— Next weekend is a major test for the Terriers, who have two Patriot League championship rematches against Colgate. The Raiders are 1-1 after splitting the season series against Army. One matchup to watch is Mathon against sophomore Keegan Records, who has jumped into the role occupied by Will Rayman last season.