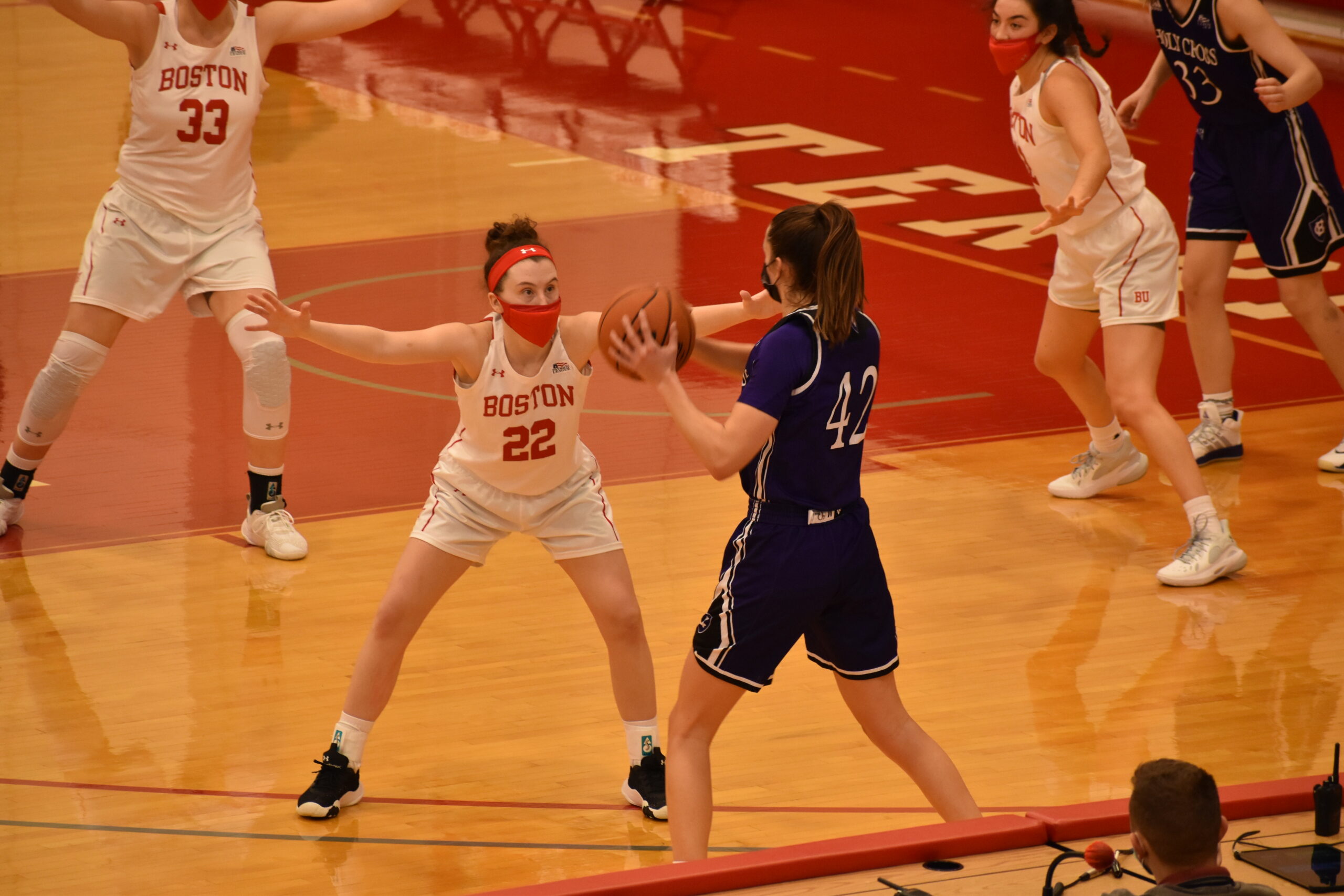 Holy Cross had no answer for the Boston University women’s basketball team for the second day in a row, allowing the Terriers to storm their way to a 72-56 victory on Tuesday.

Reigning Rookie of the Year Maggie Pina bounced back from a tough shooting day and scored 11 points on her own, including three buckets from beyond the arc. Fellow sophomore Maren Durant was active on the offensive end as well, scoring nine points and grabbing six rebounds despite the Crusaders double-and triple-teaming her all afternoon.

While the Terriers again surpassed the 70-point mark on offense, their biggest impact was on the defensive end.

Durant bullied the Crusaders in the paint, taking advantage of Holy Cross’ lack of size in the frontcourt. Her effectiveness in the post forced Crusaders forward Oluchi Ezemma into a number of circus shots, which led to Ezemma spending several minutes on the bench after the first quarter and going only 3-for-12.

Holy Cross Head Coach Maureen Magarity subsequently tried sending backup center Madison Demski, forward Janelle Allen and freshman guard Bronagh Power-Cassidy into the paint to face Durant, but didn’t have much success with that strategy either. The trio finished the game 5-for-18 and had to rely on drawing fouls in order to score.

Crusaders guard Avery LaBarbera, a Preseason All-Patriot League selection and one of the top scorers in the conference last season, was stymied by multiple BU defenders. LaBarbera shot only 2-of-12 from the floor for a total of eight points, her lowest scoring figure since February 19, 2020 against Bucknell.

The only Holy Cross player to score in double digits was freshman guard Cara McCormack, who finished with 18 points after hitting several tough threes in the closing minutes of the contest.

The Terriers ended the game with nine blocks and nine steals, including four blocks from Durant and two from sophomore guard Annabelle Larnard.

Junior forward Chiara Tibbitt backed up Durant and played effective defense on the Crusaders’ centers in her 12 minutes on the floor, and redshirt junior Emily Esposito was active on the defensive end as well.

In her collegiate debut, rookie guard Kelsi Mingo fit right into BU’s defensive rotations and helped to shut down LaBarbera on a few possessions. Mingo was assertive on offense as well, scoring eight points and sinking two three-pointers.

After outscoring Holy Cross by a combined 38 points in their first two games of the season, the Terriers will play Colgate twice in Hamilton next weekend. The Raiders split their first two-game series with Army and look like a much different team than the one that finished third in the conference last season after graduating several of their top players last spring.