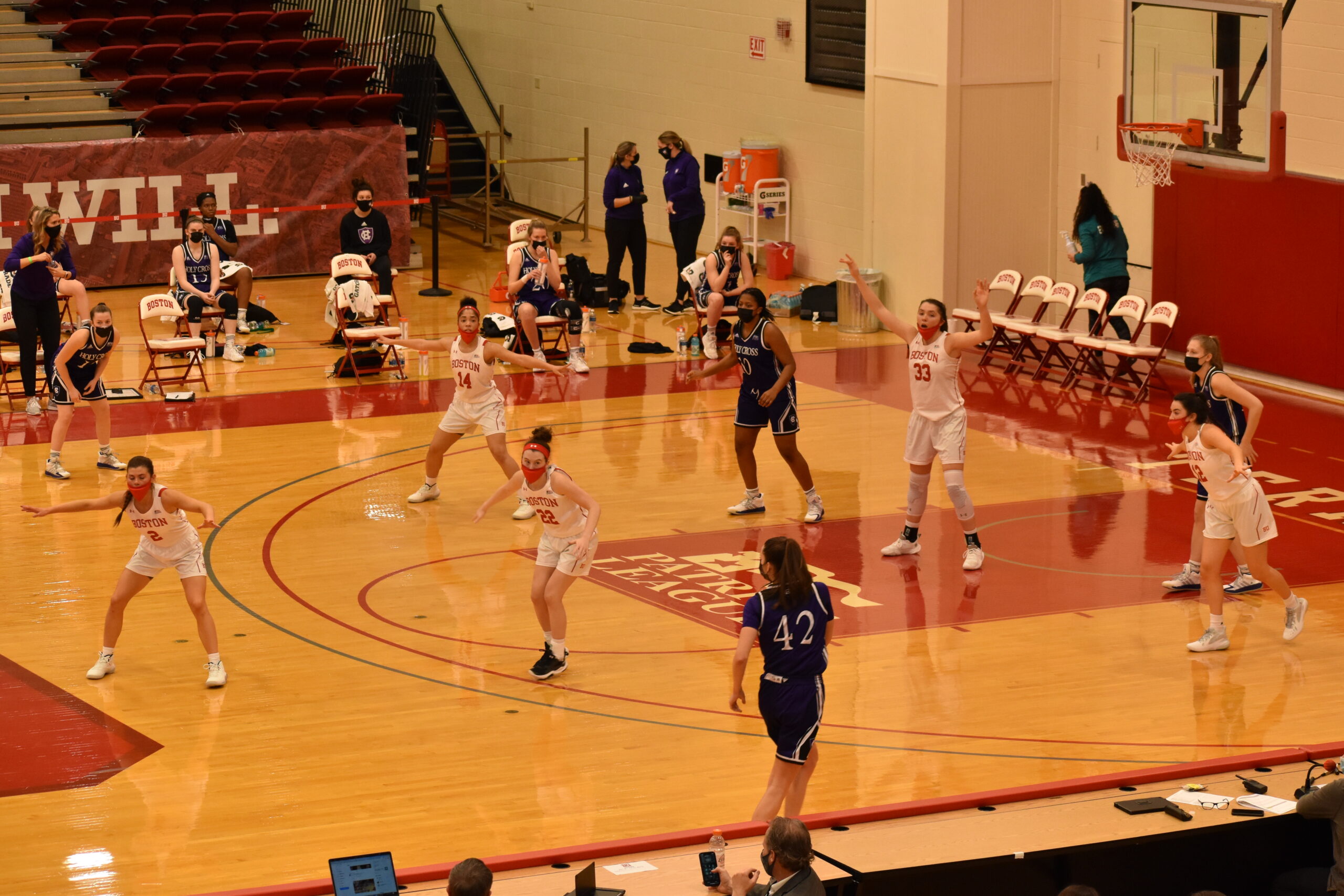 Case Gym opened its doors to Patriot League action for the first time in over 300 days on Monday. And Boston University women’s basketball picked up right where it left off.

The Terriers rolled Holy Cross in the first matchup of the 2021 season, 76-54, with contributions coming from throughout the roster. Four players reached double figures and everyone who took the court scored for BU. While Marisa Moseley’s squad had some obvious rust to shake off, she feels the team is in a good place after 40 minutes of play.

“I was pleasantly surprised with some of the stuff we did execution-wise,” she said postgame, “and I also was like, okay, it’s obvious we’ve only played zero games at this point.”

Sophomore guard Sydney Johnson came off the bench and electrified BU’s offense, going for a team-high 18 points along with three assists and three steals. Johnson looked noticeably more poised in her second season, attacking the rim often and serving as a secondary facilitator behind Katie Nelson.

“When you’re a freshman understanding the pace and physicality of the game — I think [Johnson’s] decision-making has really increased as far as better decisions with the ball,” Moseley said. “For her, this was such a tremendous growth, and a lot of it was her understanding more, not just playing one-on-one basketball but how she can be effective with her skill set.”

Fans were waiting to see what Villanova transfer Emily Esposito’s impact would be, and Moseley thrust her into action right away. The redshirt junior posted ten points and six rebounds on the night. Esposito got off to a slow start and finished 4-of-13 on the night, but demonstrated confidence in her mid-range shot. Moseley recognized there would be some pregame nerves, given that Esposito had not played a college basketball game in over 650 days.

“There’s a lot building up before a game emotionally for her… but I think her teammates were excited when she knocked in the first free throw,” Moseley said. “I know she probably wishes she shot the ball better, but she got some good looks.”

The first quarter exemplified 300 days of rust for both teams. BU and Holy Cross littered Case Gym with whistles signaling shot clock violations and travels. After ten minutes, the Terriers had amassed six turnovers, while Holy Cross tallied five. Each team finished with 18 giveaways on the night.

But as BU grew comfortable, the offense began to take off. Senior point guard Katie Nelson heated up in the second quarter and finished the game with 17 points on 6-of-9 shooting. Sophomore center Maren Durant found some post touches and finished with ten points on the afternoon. The Terriers opened the second half with a 16-2 run that put the game out of reach.

“Once we came out of the half, I feel like we settled in a bit and found our sea legs,” said Moseley.

On the other end, Holy Cross found little outside of 2021 Preseason All-Patriot League member Avery LaBarbera. The junior guard registered 15 points, four assists and four steals, but often had to carry the scoring load. Both she and freshman Cara McCormack (11 pts.) finished 5-for-14 from the floor.

First-year head coach Maureen Magarity has to find help for LaBarbera, particularly inside. BU doubled up Holy Cross 40-20 in rebounds and outscored them 40-26 in the paint. Esposito and Nelson led the Terriers with six rebounds apiece, but six different players grabbed at least three boards, compared to just two Crusaders. Durant locked down the interior with three blocks in just 19 minutes.

The margin of victory was wide, but Moseley saw plenty of areas for improvement after day one. BU held the Crusaders to 54 points, but its zone defense was clunky. Moseley’s shouts — at the lineup and at individuals — echoed off the Case Gym seats.

“It was evident that our zone isn’t where it was last year,” she said. “We’ve got some new pieces in it now with Emily, and we just gotta tighten that up a little bit.”

The Terriers will experience their first back-to-back of the season as they hit the road to rematch Holy Cross. One situation to monitor is the health of Riley Childs, who went down in the second half with a left leg injury and was helped off the court. She is a critical piece as the starting forward and energizer for BU.