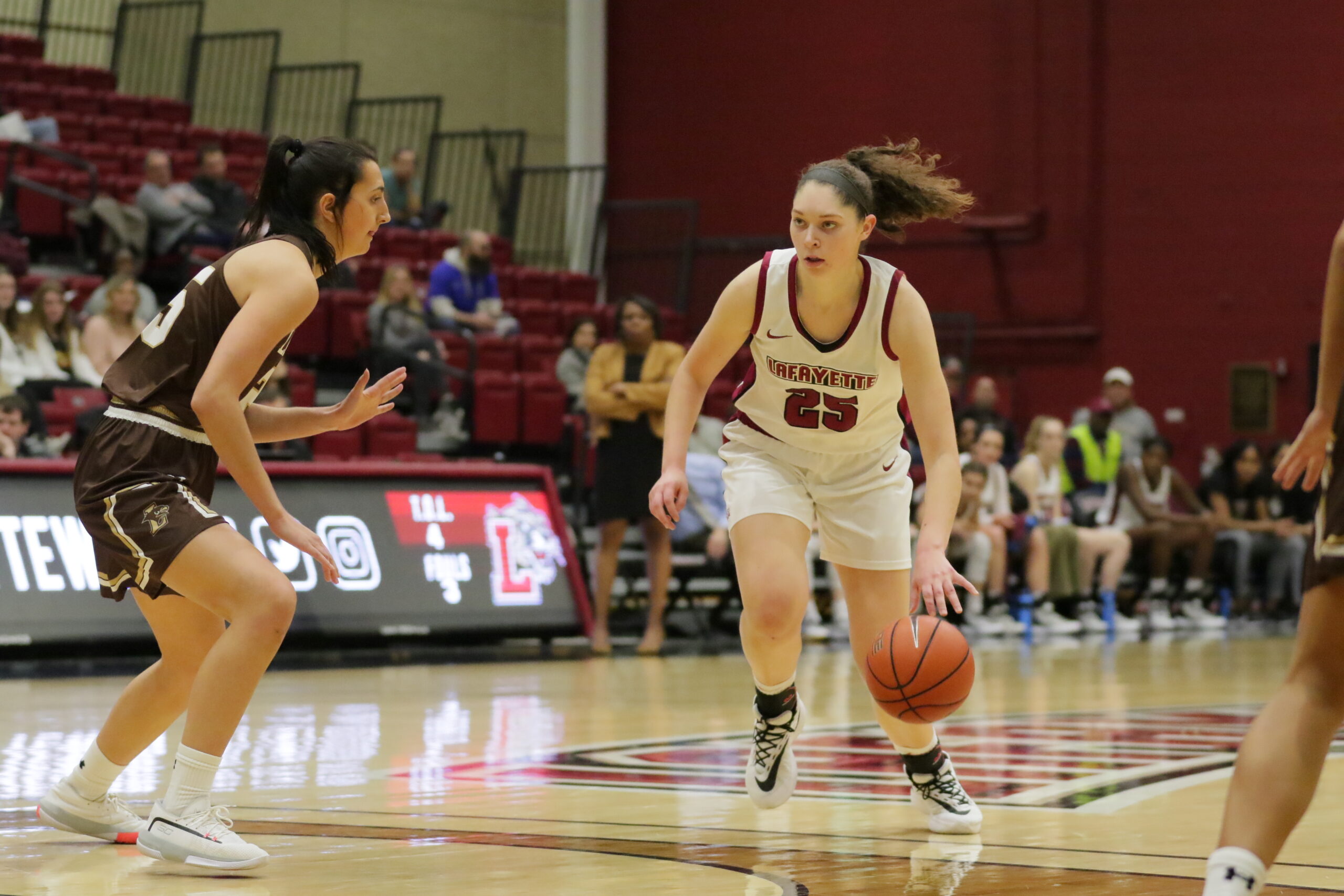 Opening tip-off in 2021 will start the most unprecedented season in Patriot League hoops history.

Significant turnover in nearly every women’s basketball program already figured to make the 2020-21 season interesting, but changes implemented by conference leadership are bound to make the league even more unpredictable and intriguing.

Teams have been reorganized into mini-conferences to limit travel, so schools will play the majority of their games against the same two or three opponents. Competition has also been limited to weekends, so teams will play back-to-back games on Saturdays and Sundays and spend the rest of the week resting and recovering.

For this week’s edition of the power rankings, Ethan Fuller and Hannah Yoshinaga put forth their best effort at making sense of the Patriot League women’s basketball landscape, looking at each team’s biggest offseason moves and anticipating how programs will adapt to the league’s new format.

Tessa Brugler had a breakout season this year and earned a spot on the All-Patriot League Third Team after finishing fifth in FG% and third in offensive rebounds. Our #TBT clip is from the first of three double-doubles Tessa produced throughout the season.#rayBucknell | #TST pic.twitter.com/9xUrQT5pxU

As usual, the Bison decimated the Patriot League last season, losing two conference games and one home game in totality last season. Trevor Woodruff earned Coach of the Year honors in his first season at the helm, leading a seamless regime change. The Bison launched threes at a 38.9 percent clip last season — good for fifth in the country — and show no signs of slowing down. Bucknell topped the Patriot League’s Preseason Poll, and Abby Kapp was named to the league’s Preseason All-PL First Team.

Even with the graduation of POTY winner Ellie Mack, the Bison are loaded for 2021. Kapp, Taylor O’Brien and Ally Johnson are all 35+ percent long range shooters who headline this year’s squad. Six-foot-one forward Tessa Brugler should inherit much of Mack’s workload. Until Bucknell gives us any reason to doubt its track record, this team has the top spot. — Ethan Fuller

This Week: January 2 vs. Navy, January 3 at Navy

If any team has a chance at upending Bucknell’s conference dominance, it’s Marisa Moseley’s squad. The Terriers found a new level midway through conference play, and went on to win ten of their last 12 games (with two losses by a combined three points). By the end of the run, BU was starting three freshmen and still maintaining one of the stingiest defenses in the league.

Nia Irving had shifted into more of a leading bench role by the spring, so while her graduation leaves a hole in the frontcourt, the Terriers have Maren Durant inheriting the center spot. Emily Esposito is another intriguing add as a wing from Villanova. Then the rest of the roster is set from last year. The Terriers should again be led by Preseason All-Leager First Teamer Katie Nelson, 2020 Rookie of the year Maggie Pina and energetic junior Riley Childs.

This Week: January 4 vs. Holy Cross, January 5 at Holy Cross

Lafayette forward Natalie Kucowski is a favorite for Patriot League MVP this season, as evidenced by her recognition as Preseason Player of the Year. She figures to pack a punch in her final season at Kirby Sports Center. One of the top rebounders and defenders in the league, Kucowski will anchor a Leopards squad that poses a threat to any team in the Patriot League.

Not to go unmentioned is returning guard Drew Freeland, the Leopards’ top three-point shooter who will help space the floor and give Kucowski room to work in the paint. Nicole Johnson is another scoring threat who will augment the Lafayette backcourt, in addition to freshman additions Alana Lombardi and Amaya Douglas.  — Hannah Yoshinaga

This Week: January 2 at Lehigh, January 3 vs. Lehigh

American has one of the best returning classes in the league, including All-Patriot League guards Indeya Sanders and Jade Edwards. While the loss of Kaitlyn Marenyi hurts, Edwards and Sanders made big contributions last season and should only further cement their cases for being two of the top guards in the league this year. Edwards has already earned praise, landing on the Preseason All-Patriot League First team.

In spite of losing Marenyi, American returns most of last year’s roster and adds an intriguing freshman class into the mix as well. The Eagles’ case for being a top Patriot League team is helped by their mini-conference placement, which pits them against two of the weakest teams in the league, Navy and Loyola MD, nearly every weekend. — Hannah Yoshinaga

This Week: January 2 at Loyola MD, January 3 vs. Loyola MD

Megan Walker for 3! Her third of the game puts Lehigh up by 14. Watch: https://t.co/qhAZqKfukw. #GoLehigh pic.twitter.com/0tSBOSBEm9

After struggling offensively for most of the season, Lehigh seemed to find its footing in February, and was slated to face Boston University in the semifinals when the season was shut down. But two of the most potent players — Camryn Buhr and Cameryn Benz — are graduated. Emma Grothaus is the team’s leading returning scorer, but she faced inconsistency for most of last year. Junior Megan Walker is the only returner who shot above 35 percent from deep in 2019-2020.

Look for Walker to feature heavily for the Mountain Hawks, along with Grothaus and Mary Clougherty. Don’t be surprised if some members of the six-person freshman class get extended run time, given the lack of proven scoring in the rotation. With a gauntlet Patriot League pod that includes Bucknell and Lafayette, Lehigh needs to find its go-to playmakers quickly. — Ethan Fuller

This Week: January 2 vs. Lafayette, January 3 at Lafayette

We are exactly ONE MONTH away from the start of basketball season!

'Sader Stories sat down with members of @HCrossWBB and @HCrossMBB to discuss their long-awaited tipoffs.

This season brings major changes to a Crusaders team that was a consistent threat the last few seasons. For one thing, Holy Cross needs to adapt to life without WNBA draftee Lauren Manis, easily the best player in program history, and Megan Swords, one of the toughest centers to match up with in the league last season. The Crusaders will also be led by new head coach Maureen Magarity, who takes charge after Ann McInerney served as interim head coach last season.

However, Holy Cross boasts one of the strongest and most intriguing recruiting classes in the conference. Junior guard Avery LaBarbera was named to the Preseason All-PL First Team this past week. Some of the top new contributors are sure to be Bronagh Power-Cassidy, a NEPSAC Class A All-Star with FIBA experience abroad, and Steph Davis, another All-NEPSAC selection. If Holy Cross’ additions adjust to their new roles smoothly under Magarity’s tutelage, the Crusaders could cause trouble in the PL North mini-conference. — Hannah Yoshinaga

Colgate is in the running with Holy Cross for the biggest offseason loss after losing its four leading scorers and top rebounder, as well as two of its best passers. The Raiders struggled to maintain their status as the best team in the Patriot League last season despite having one of the conference’s strongest rosters on paper, raising even more questions about where their young squad could end up in the standings come February.

The Raiders have one of the more difficult conference schedules in the lineup, with more than half of their matchups coming against BU, Bucknell or Holy Cross. Returning players will need to adjust to larger roles in the offense, while Colgate’s strong freshman class will also be met with heavy workloads and high expectations. — Hannah Yoshinaga

This Week: January 2 vs. Army, January 3 at Army

Army’s 2021 lineup will look similar to the one the team put out last season, as the Black Knights did not lose any major contributors. Alisa Fallon should continue to prop up an Army squad still searching for its identity at the bottom of the Patriot League standings. Kate Murray has also impressed thus far, averaging 15.4 points in five non-conference games.

The Black Knights will not get the benefit of a soft schedule in spite of the Patriot League’s temporary conference realignment, with several of their matchups coming against powerhouse BU and Holy Cross.

This Week: January 2 at Colgate, January 3 vs. Colgate

St. Francis calls timeout after a Laryn Edwards 3-pointer cuts the deficit back down to five with under two minutes remaining. #GoHounds pic.twitter.com/WzaehBhl5T

The Greyhounds appear a rudderless ship without Stephanie Karcz, who was far and away the team’s best player last season. Karcz led the unit in points, rebounds, assists and steals en route to a Defensive Player of the Year award. But her offensive contributions will also be missed; Loyola Maryland averaged a paltry 58.8 points per game last season, even with Karcz’s 11.5 per game.

Without Karcz and Alexis Gray, someone has to step up on offense. Junior Laryn Edwards improved throughout league play and is a candidate to lead on the scoreboard. Keep an eye on Devyne Newman, a transfer from St. Joseph’s known for her presence on the defensive end. — Ethan Fuller

This Week: January 2 vs. American, January 3 at American

TIE BALL GAME!!! Sophie Gatzounas with ice water in her veins as she knots it 54-54 with an off-balanced three-pointer!
Catch all of the overtime action on the PLN: https://t.co/eDBvNjwZbc pic.twitter.com/aDluwMT30t

What to do with Navy… after a rock-bottom 2019-20, the Mids graduated their lone All-PL representative in Mary Kate Ulasewicz. The team floundered after Jennifer Coleman was ruled academically ineligible in January. They won both conference games in a single late-January week, but otherwise were outclassed by the league.

Navy joined Army as the teams with a head start to the season, which consisted of four non-conference losses. Coleman scored 25 points in her lone appearance. Senior guard Sophie Gatzounas has been the brightest spot so far, averaging 18.5 points on 52 percent shooting in the preseason-esque matchups. But even with a relatively easy schedule, Navy has a long way to go before it climbs out of the Patriot League basement. — Ethan Fuller

This Week: January 2 vs. Bucknell, January 3 at Bucknell