Although it’s known for being a mid-major conference, the Patriot League still boasts an intriguing lineup of former players who inked professional contracts after graduation.

Many basketball fans would recognize the names of some of the top Patriot League alumni — including 2016 NBA Most Improved Player CJ McCollum, a Lehigh alum taken with the 10th overall pick in 2013, and Oklahoma City Thunder forward Mike Muscala, a Bucknell graduate who went in the second round of the same draft.

Basketball nerds like myself who spend too much time digging through NBA rosters might also recall Malcolm Miller. The 2015 Holy Cross graduate won a ring with Toronto Raptors in 2019 despite having spent much of the season with the team’s G-League affiliate.

However, the list of league alumni who went pro includes many other players who found success in different countries and leagues. I think it’s only fair that we take a look at those players, their professional teams and the programs and coaches that shaped them.

Programs with a Track Record of Sending Players to the Pros 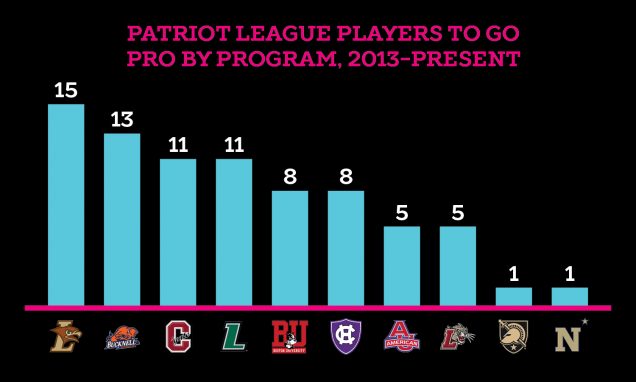 Lehigh and Bucknell have been the cream of the crop when it comes to sending players to the pros, getting 28 athletes to the professional level in just seven years.

Lehigh is the only Patriot League program to have a player turn professional every year since 2013. The most recent Mountain Hawks alum to secure a pro deal was Jordan Cohen, a third-team All-Patriot League selection who signed a contract with Maccacbi Haifa Basketball Club in August.

Lehigh head coach Brett Reed has played a major role in the success by mentoring players like McCollum. McCollum was only a three-star recruit when he first arrived in Bethlehem, but ended his NCAA career as one of the top prospects heading into the 2013 NBA draft. Reed also led the team to its iconic 75-70 upset of Duke in the 2012 NCAA tournament.

Former Bucknell head coach Dave Paulsen and current head coach Nathan Davis have sent 13 players, including Muscala, to the pros since 2013, another impressive mark. Although they put up a lackluster 2019-20 campaign, the Bison still had a pro player this spring in Kavaughn Scott, who signed with Aanekosken-Huima of EuroBasket.

While Colgate, Loyola and BU have consistently sent players to the pros the last several years, Holy Cross is a program on the rise. Despite having only two players turn professional from 2013 to 2016, the Crusaders have had six since then. Recent signees include Lauren Manis, an All-Patriot League First Team selection last season, 2020 grad Clayton Le Sann and 2019 grad Jehyve Floyd. 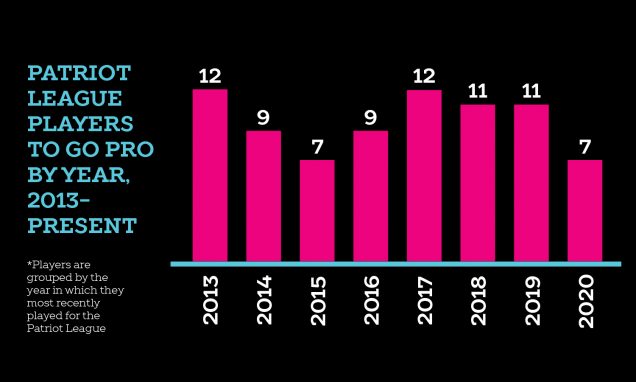 As a whole, the league has been relatively consistent when it comes to getting players to professional leagues around the world. While only seven Patriot League players have begun their pro careers thus far in 2020, that number will almost certainly increase once more leagues recover from challenges brought on by the COVID-19 pandemic.

Where Players Have Ended Up 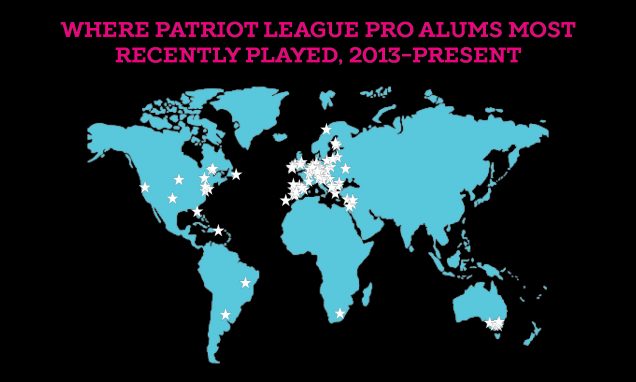 Patriot League players have hooped on six continents and at least 35 countries since 2013. The majority of those athletes play in Europe, which offers the highest concentration of professional basketball opportunities. However, several players have also found success in North America between professional leagues in the U.S. and Canada. 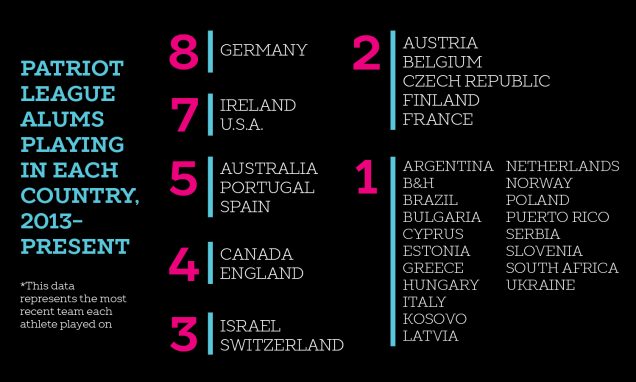 Germany currently hosts the highest number of former Patriot League basketball players, including 2020 grads Will Rayman of BC Gӧettingen, Max Mahoney of the Kirchheim Knights and Sa’eed Nelson of USC Heidelberg.

The U.S. and Ireland come in second with seven players apiece.

While only 10 female Patriot League graduates from 2013 and on have been able to pursue professional opportunities, three of those athletes signed deals in Ireland. Holy Cross alumni Madelyn Ganser and Tricia Byrne were able to join the same Irish Super League club, Singleton Supervalu Brunell Cork, in consecutive years after playing together in Worcester for a few seasons.

Some of the most well-known Patriot League players have earned deals with U.S. clubs, most of which are affiliated with the NBA. In addition to McCollum, Muscala and Miller, all of whom have logged minutes with NBA teams, Colgate alum Jordan Swopshire and Lafayette alum Monty Boykins have spent time with G-League organizations. Former Bucknell center Nate Sestina also worked his way to an Exhibit 10 contract with the Brooklyn Nets this offseason.

Israel, Spain and Portugal have been popular destinations in recent years as well, with five players signing deals in those countries the last two years.

Highlighting the Players Themselves

By my count, 78 Patriot League players turned pro in the last seven years, growing the league’s presence on the global basketball stage and paving the way for more conference alumni to continue their participation in the sport past graduation.

When it comes to the careers of individual players, there are countless stories to be told — for example, 2014 Colgate grad Murphy Burnatowski reached the Canadian National Basketball League Finals in 2019 with the St. John’s Edge. 2019 Lehigh grad Meagan Eripret was the first female Mountain Hawk to go pro in almost a decade, signing with Basket Club Lourdais in Lourdes, France. Fellow Lehigh alum Tim Kempton Jr. followed in his father’s footsteps by playing in Spain, Israel and Greece.

On the domestic stage, Colgate alum Jordan Robertson led the Albany Patroons to a championship in The Basketball League in 2019. Loyola MD grad Dylan Cormier played with the DMV Warriors of the American Basketball Association after playing a successful season in the Dutch Basketball League and being named DBL Sixth Man of the Year in 2015. 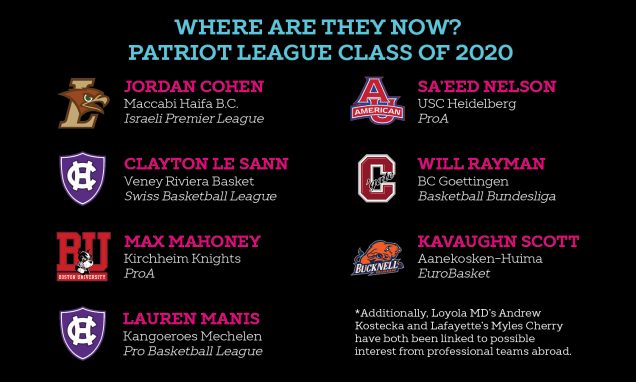 While the pandemic limited opportunities for the class of 2020, their accomplishments in the professional sphere haven’t been any less impressive thus far.

Holy Cross star Lauren Manis made history in April when she was drafted with the 33rd overall pick of the 2020 WNBA Draft by the Las Vegas Aces. Manis was the first Crusader to be selected and only the second female Patriot League player to hear her name called on draft night.

BU alum Max Mahoney is leading the Knights in blocks and ranks second on the team in points per game with 14.6 PPG, trailing only 2019 Lehigh grad Kyle Leufroy. Bucknell’s Kavaughn Scott is the second-leading scorer for Huima with an average of 27 points per game.

The number of 2020 grads on the pro stage should only increase as more opportunities become available. Lafayette alum and Australia native Myles Cherry could work his way to an NBL deal, and All-Patriot League First Team honoree Andrew Kostecka is a prime candidate for a professional assignment once he’s done rehabbing a previous ankle injury.

Although basketball, and the athletics world as a whole, is still recovering from a year that spared no one, the future’s still bright for conference alums looking to take the next step. It’s a great time to be a Patriot League basketball fan.

Correction: We would like to note that KaVaughn Scott actually played for Loyola Maryland during his time in the Patriot League — not Bucknell. We would also like to acknowledge Kelsey Minato of Army, who played professionally in the WNBA.