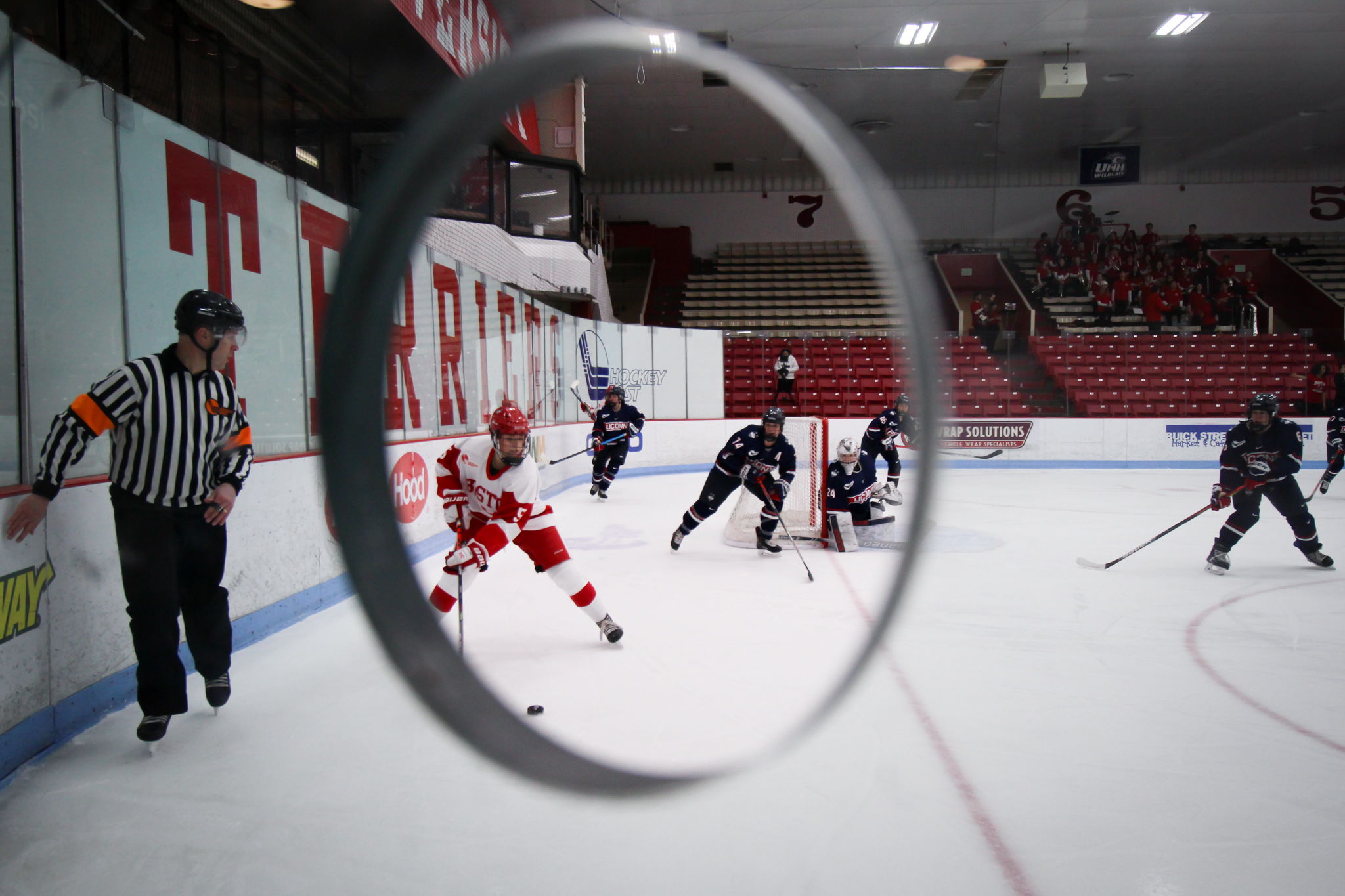 After originally not being scheduled to play this weekend after their series with Vermont was postponed, the No. 10 Boston University Terriers (1-1-0, 0-0-0 HEAW) will travel to the University of Connecticut (0-3-1, 0-2-0 HEAW) for a Friday evening showdown.

The Terriers are coming off a series split last weekend with the University of New Hampshire to kick off their season, taking the first contest, 2-1, before falling, 4-3, on Saturday evening. Meanwhile, the Huskies are coming off a sweep at the hands of the ninth-ranked Boston College Eagles.

“UConn is always a good defensive team, really well coached and one characteristic of theirs in the regular season is that they seem to continue to try to get better, try to learn and never seem to get too high or too low,” BU head coach Brian Durocher said.

The Huskies, who made a run to the Hockey East championship last year before losing to Northeastern, always seem to find a way to be in the mix in Durocher’s eyes.

“They’ve had a fantastic run in the playoffs – always probably outsmarting everybody and finding ways to get to the championship game or the semifinals,” he said. “Credit to them for their success.”

Through two games, the Terriers have been paced by senior captain Jesse Compher, who has two goals, junior forward Courtney Correia (2a) and sophomore forward Julia Nearis (2g).

Although Correia was unable to convert any chances into the back of the net herself last weekend, the left-shot winger certainly had a strong showing on the ice through the two games, adding to what has been continued growth on the ice and in the locker room throughout her career with the Terriers.

“Especially now being an upperclassman, I’m definitely taking on a bigger leadership role, training hard, leading on the ice, off the ice and in the weight room, and just kind supporting everyone,” Correia said. “When we all work together, it’ll bring success on the ice.

“There’s a lot of talent on our team, and our coaches have a great vision, which will help us be successful in the long run.”

Despite their record, the Huskies have plenty of firepower to throw at the Terriers. Senior captain Natalie Snodgrass, who has led the Huskies in goals and points for three straight years with 120 points (52g, 68a) in 113 games on her career, is yet to find the scoresheet this season. However, with 24 shots on goal in four contests, it certainly is not for a lack of trying.

UConn Sophomore forward Savannah Bouzide has picked up the slack though, with five goals in four games. The Terriers know they will have to be at their best to charge into the winter break on a high note.

“This will be a game that comes up right as we are dealing with finals, so that always makes it a little bit trickier,” Durocher said. “But I think come Friday, our focus will be [on the game].”

“UConn is a good team,” Correia added. “I think we’re still feeling each other out as a team where [Saturday] was only our second game.”

Puck drop between BU and UConn is scheduled for 6 p.m. Friday evening.

Other notes this week from Correia and Durocher…

One notable absence from the Terriers’ lineup last weekend was that of junior forward Emma Wuthrich, who underwent surgery late in the offseason after trying to avoid a procedure with rehab, according to Durocher.

“Unfortunately after some of that intervention, surgery was imperative,” Durocher said.

Wuthrich is back to participating in off-ice activity, but Durocher knows the team can never be too cautious with injuries, which means the left-shot center will likely make her return in the new year.

“She’s pretty far back right now, somewhere between three and four months, but it probably is more of a five-month rehab, which takes her into January,” he added. “Hopefully, she’ll be back in good order by then.”

“She’s a very good player, who I don’t think anybody seen the best of yet,” Durocher said.

Freshmen incorporating into the team nicely

The Terriers boast a fairly sizable first-year crop this season with three forwards and four defenders making up this year’s freshman class. Correia has liked what she’s seen so far from the Class of 2024.

“They’re a super talented, skilled and committed group,” she said. “They worked super hard off the ice in the summer, and when we came back to BU, they looked good on the ice as well. Ultimately in the classroom, they’ve been working really hard too.”

Each year the Terriers come up with a set of goals for the team ahead of the season. This year, the freshmen took part in that process as well.

“One interesting thing about this group is they got to play a part in developing our goals and kind of helped shaping our culture,” Correia added. “They’re really living those values, and overall, they’re a really strong group. They’re awesome.”

Taking each week in stride

The start to the 2020-21 season has certainly been interesting on both the men’s and women’s sides of Hockey East. With a slew of postponements, as well as winter sports pauses and delays at a handful of programs, the schedules for the first few weeks of the season are skeletons of what they originally were.

Last weekend’s series at UNH substituted what would have been the season-opening series at Maine for the Terriers, while Friday’s game at UConn is in place of BU’s home-opening slate with Vermont. The start to the season has certainly tested the league and the Terriers.

“It’s definitely been a constant challenge, all the way back to the beginning of the year when we didn’t do anything for a couple of weeks, and that’s not a normal for us,” Durocher said. “Now it’s placing games in there, as we did with UNH twice, and now with UConn.”

While it has been a different season so far in many ways, Durocher knows his team is just happy to be able to play.

“Excitement definitely outweighs any negativity in my mind because they really do get excited to play,” he said. “[The players] want to play and they want to compete.”

Correia echoed Durocher’s sentiment, as the Terriers are doing everything they can to make sure they are able to stay on the ice.

“It’s definitely a different time right now,” she said. “Our ultimate goal is just being able to play and doing everything that we can to stay committed to that, whether it’s testing, training, or wearing our masks everywhere.”

“We’re doing it, we’re working hard, and we just want to play.”