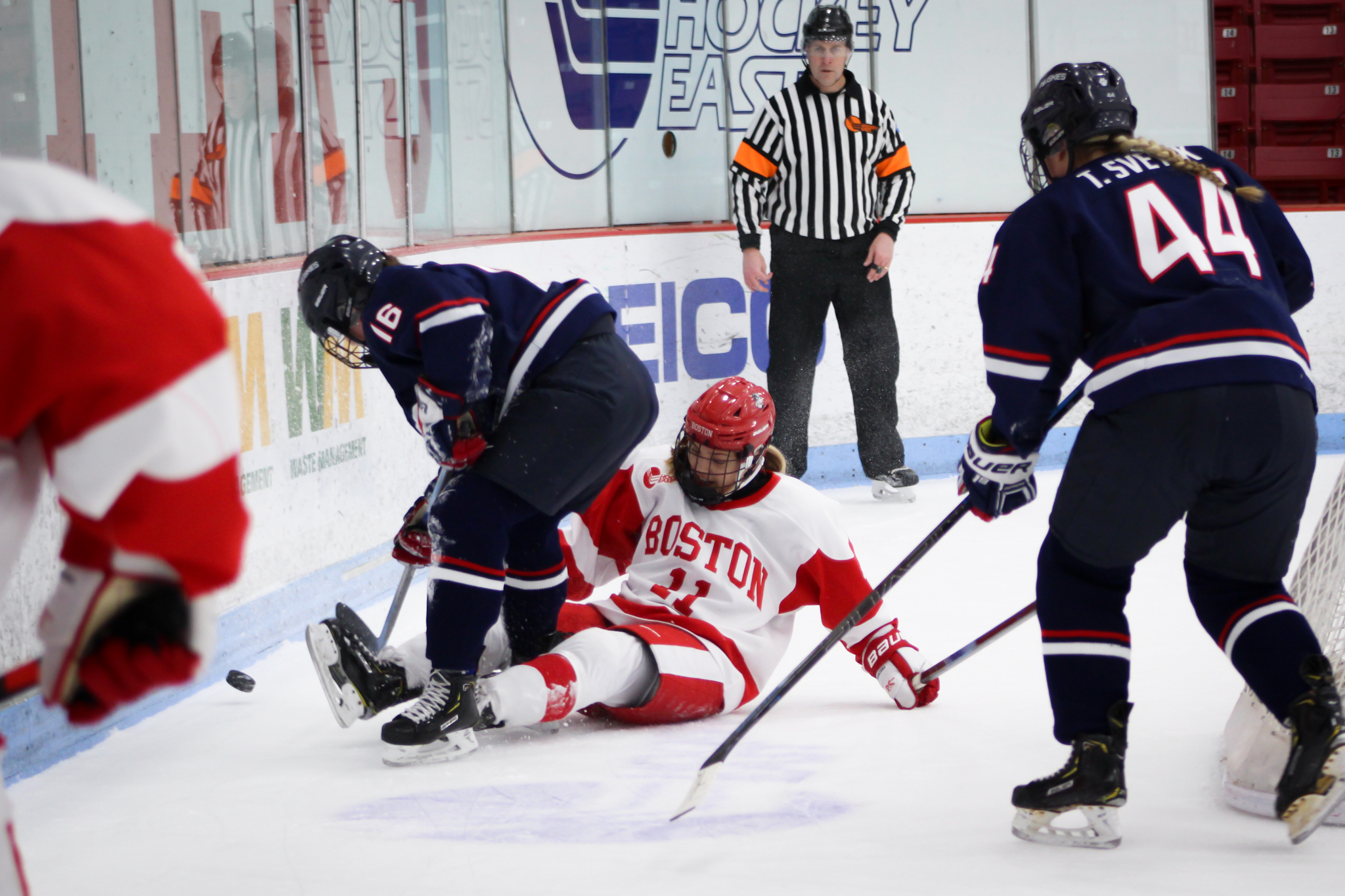 The Terriers were without senior captain Jesse Compher, freshman forward Lacey Martin and freshman defender Julia Shaunessy, although their absences were not injury related.

“Thankfully up to this point, we’ve had zero positive COVID tests, but in following Hockey East and Boston University protocol, we wanted to be extra safe, so those three did not make the trip down to UConn tonight,” Durocher said.

Senior goaltender Corinne Schroeder, who made 18 saves on 19 shots in the team’s season-opening win against New Hampshire last Friday, got the start for the Terriers. Freshman netminder Tia Chan (.934 save percentage and 1.99 goals-against average in her first two starts) went for the Huskies.

UConn got off to a quick start as senior captain Natalie Snodgrass potted her first of the season after being held off the scoresheet through the team’s first four games. Snodgrass found a gap in BU’s coverage and one-timed a feed from senior forward Morgan Wabick past Schroeder to put the Huskies up less than five minutes into the game.

Nat with her 53rd career goal to put the Huskies out in front! pic.twitter.com/XUl89pmrfq

Late in the first, junior defender Camryn Wong doubled the Huskies’ lead. Morgan Wabick dished to Snodgrass, who was flying in off the rush. Snodgrass fired a wrister toward goal, which Wong deflected past Schroeder on the doorstep.

Cam notches her first of the year and fourth goal of her career to give #UConn a two-goal edge! pic.twitter.com/2On41yJsns

Although the Terriers appeared to dominate most of the attacking zone time throughout the opening frame, they could not crack Chan as the 2-0 score held heading into intermission.

BU entered the second period with 1:51 of power play time left from the first, but failed to capitalize. After killing off the penalty, UConn went to the advantage themselves.

Huskies junior forward Danielle Fox tripled the lead for UConn on the power play, putting them up 3-0. Wong swooped in off the rush, and sent a shot-pass toward the goal, looking for a redirection. The puck deflected off a stick in front right to Fox in the slot, and she fired it past Schroeder just 3:45 into the second period.

8th career goal for the junior pushes the #UConn lead to 3! pic.twitter.com/5LnARzMlid

Just 18 seconds later, freshman forward Kate Klassen made it 4-0 in favor of Connecticut. Senior defender Taylor Wabick sent a wrist shot in from the point, Schroeder made the initial save, and Klassen was able to slide the loose puck underneath Schroeder amidst a goalmouth scrum.

8th career goal for the junior pushes the #UConn lead to 3! pic.twitter.com/5LnARzMlid

The four-goal cushion held heading into the third period as the Terriers could not get much going offensively to match UConn.

“What I don’t want is for us to have to be semi-embarrassed before we get the level compete up,” Durocher said. “[Entering the third] I said ‘I don’t care what the final score is. I want to know who our competitors are.’”

The middle stanza marked the end of the night for Schroeder (18 saves) as junior goaltender Nicole McGuigan got the nod for the Terriers in the third period.

“I think today we sort of left our goalie out to dry a bit with tips, rebounds and opportunities for them to score,” Durocher said. “That’s where we just have to be a little more dedicated, a little tougher, and and do a better job.”

“I also wanted to send a subtle message by changing goalies, so that we know that, ‘hey, I’m not going to let you leave our all-star goalies out to dry.’”

Entering the game, McGuigan had not played since her freshman year, where she made three saves on three shots in 29:11 of action across two games.

BU came out with more energy in the third, but the first half of the period was otherwise uneventful aside from saves from McGuigan on a slap shot from Taylor Wabick and a wrister from Savannah Bouzide.

With BU on the power play, Snodgrass sped around the BU defense to break in alone on McGuigan. However, the netminder was up to the task, making a strong left-to-right push to stone Snodgrass’ attempt to slip it by.

Natalie Snodgrass splits the defense, but Nicole McGuigan stares her down with the cross-crease push to make the save. pic.twitter.com/5IZMbMa9as

“I was really, really excited for [McGuigan] to come in,” Durocher said. “She made a real nice stop on Snodgrass when she got an opportunity, and that’s what being a teammate is.”

With 2:48 remaining in regulation, junior forward Mackenna Parker found the back of the net, getting BU on the board and ending Chan’s bid for her first career shutout.

Sophomore forward Julia Nearis stripped the puck from a Huskies defender and passed to junior forward Courtney Correia, who sent a nice touch-pass to a wide-open Parker, who redirected it into the open goal.

Good work off a faceoff leads to Mackenna Parker's first goal of the season. pic.twitter.com/qxR0Wpurf7

The 4-1 score remained as the final horn sounded. Snodgrass finished the night with a goal and two assists, while Morgan Wabick added two helpers for the Huskies. Chan stopped 21 of the 22 shots she faced, while McGuigan was a perfect three for three, preserving her 1.000 save percentage on six shots through 49:11 of ice time for her career.

“[McGuigan] is somebody that kids cheer for as hard as anybody because she’s a first class individual, she’s a quality student-athlete and she’s somebody who really cares about the team,” Durocher said. “She knows how to be a teammate. She knows how to give somebody the business when they’re not being a good teammate.”

“Kudos to her. She’s a class act. We’re very lucky and fortunate to have her at BU and her teammates are lucky to have her as well.”

With her assist on Parker’s first of the season, Correia is up to three points (all assists) through three games on the season.

The Terriers enter the winter break on a two-game losing streak. According to Durocher, a focal point for the coaching staff and the team over the pause will be to keep bringing the young defense group up to speed.

‘Defense will be first [priority], and just a determination of what you have to do to be good defensively,” he added. “It’s mostly hard work, and we’re not quite up to that task yet.”

“We’ve all got to take stock during his break and realize that we’ve got to ramp it up when we get back here in January.”

BU will return to action on Jan. 1 against New Hampshire at Walter Brown Arena, barring any schedule changes.

Featured image: BU forward Mackenna Parker (11) battles for the puck with UConn defender Taylor Wabick (16) after falling to the ice in a game at Walter Brown Arena on Feb. 21, 2020. Photo by Hannah Yoshinaga.