After a three-week break for the holidays and to allow for the rest of the regular season to come and go, the playoffs begin Thursday night in the WTBU Sports Fantasy League. Certain teams squeaked into the top six to make the playoffs, while some teams cruised into the postseason and others just barely missed out.  Today, I’ll break down the playoff bracket, while also shouting out the four teams, who sadly did not make the cut. Today, the teams will be ranked by where they finished in the league, and not by power ranking.

Akshai’s team’s season was summed up in a nutshell by his Week 13 loss to Happy Golladays: a blowout. Akshai’s team last won a contest in Week 7, and his team dealt with many trades and a lot of roster tumult. Only three players from his Week 1 starting lineup remain in Nick Chubb, Juju Smith-Schuster and Tyler Lockett. Further, as his team enters the consolation bracket, he projects for only 116 points and leaves little to be excited about with a 2-11 finish for last place in the East. Akshai will need to draft better and get some better luck if he returns to the league next season.

Perry’s team dropped four straight games to close out the season at the bottom of the West division. This finish seemed the most shocking out of the bottom-four since he had Travis Kelce, Terry McLaurin, D’Andre Swift, Mike Evans, Justin Herbert, Chase Claypool and, for half the season, Tyler Boyd. That’s a metric ton of talent for one roster. However, starting Cam Newton certain weeks, while also sitting Evans sometimes, coupled with the nose-dive of Ezekiel Elliot’s stats led to a balancing out of the production of his talent. He projects for almost 124 points in this first playoff week, but this is a lost season for Perry’s team. He drafted well but poorly utilized his talent.

Ethan’s team was both the most fun to cover, and the team with the earliest drastic roster changes. Combine Michael Thomas and Austin Ekeler getting hurt with trading away Lamar Jackson, Robby Anderson and Jonathan Taylor for Drew Brees and Saquon Barkley before Week 2 ended up crashing his team. While Josh Allen turned out to be a fantasy star, the rest of his team could not stay healthy and he rotated through players more than any team. His team has a low projection of less than 115 for this week, but all I can say is that his luck, and his trading, have to get less bad next year.

My team died with Dak Prescott going down. I attribute the team’s downfall to that because it led me to make a terrible trade for Cam Newton, and then trade away my first-round pick in Clyde Edwards-Helaire for an inconsistent Lamar Jackson. Despite the QB roulette, I managed to land undrafted standout RBs James Robinson and Myles Gaskin, along with rookie WR Tee Higgins. While I clearly picked players off waivers relatively well, my roster got worse and worse, while injuries and poor starting choices piled up. With a mere 118 points projected, my team can exceed that like it did last week, but on the whole, it was a tough season.

Now, let’s take a look at the six playoff teams. From here on, I’ll break the teams down by each Round One playoff matchup, followed individually by a look at the top two seeds, who earned byes from round 1. Here’s the Bracket: 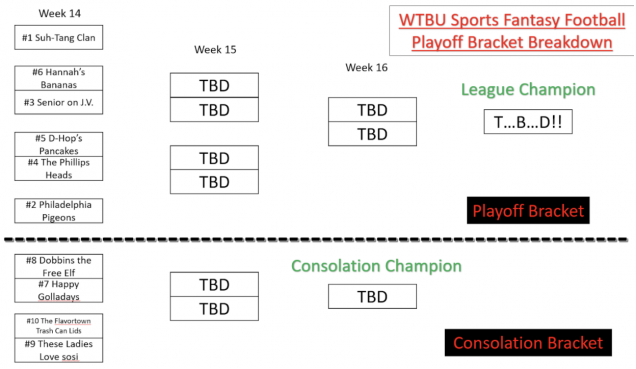 Having somehow landed Christian McCaffrey, George Kittle, Julio Jones and A.J. Brown, as well as rookie Antonio Gibson in the draft, Hannah’s team seemed destined for a top three finish, but that did not happen. Her team lost four-straight to close out the season, falling from 7-2 and competing for a bye to 7-6 to barely squeaking into the postseason. With Kittle, Jones and C-Mac all hurt for large chunks of the season, it was a small miracle that she finished with a winning record. She projects for 120 points, but that will not be enough to beat Chad’s Team.

Chad sat at No. 1 in the power rankings from Weeks 3 through 7, and in that time we sat back and watched the league’s best RB duo carry him to win after win. Led by Alvin Kamara and Aaron Jones early on, Chad also got some great weeks from Calvin Ridley, Deshaun Watson and Adam Thielen. He went 6-0 before finishing the season 3-4, which definitely shows lost momentum. Nevertheless, he has the better squad and the advantage in this matchup

UPDATE: Senior on J.V. defeated Hannah’s Bananas 116.76-80.38 and will move on to face the Philadelphia Pigeons in Round Two of the playoffs.

Each of these teams were built around one fundamental principle. For Brady, that was trading. No team initiated, or was involved in, more trades than Brady’s team. Some moves panned out like trading away Drew Brees and Saquon Barkley, while trading Keenan Allen for Leonard Fournette or trading away Darren Waller and Wayne Gallman Jr. were not ideal moves. Brady tried to trade with almost everyone, but he still got great production for the players he kept. DeAndre Hopkins lived up to the hype, while Chris Godwin did not. Other than them, so few on his roster started there or stayed there. Nonetheless, a huge win over the No. 2 Philadelphia Pigeons led to a playoff berth, where he now must beat Joe’s team.

Joe’s fundamental principle was the Seahawks. Led for most of the season by Russell Wilson, Chris Carson and D.K. Metcalf, Joe’s team got the worst luck of all at the beginning of the season. He sat under .500 for many weeks, despite being in the top three in scoring at the same time. Aside from his Seahawks, Derrick Henry, Joe Mixon, Amari Cooper, Justin Jefferson and even Raheem Mostert and Jameison Crowder too. For the most part, other than Mixon, Joe’s team’s strengths are all active heading into the end of the 2020 NFL season, and that bodes well for him heading into these playoffs.

UPDATE: The Phillips Heads defeated D-Hop’s Pancakes 138.34-132.44 and will move on to face Suh-Tang Clan in the Round Two of the playoffs.

Ben’s team swung from the very bottom of the rankings to No. 2 this season. It seemed for a while that every time I hyped his team up, it struggled, but that ended early enough for him to enter the playoff and barely clinch a bye. Carried for much of the year by Kyler Murray, Stefon Diggs, Tyreek Hill and Keenan Allen, Ben thrived when they did, and struggled in reciprocal situations. Also, he landed the top fantasy kicker in Younghoe Koo, which was total luck, but a definite W. Despite the tough loss last week, and the bye, Ben already projects for almost 130 points this week, and that should remain his expectation so long as his team stays healthy.

Our Co-Director and hockey guru proved that he knows plenty about fantasy football too. Patrick landed the top QB in Patrick Mahomes, a top three WR in Davante Adams, a top three RB in Dalvin Cook, plus highly-ranked WR Robert Woods and highly-ranked TE T.J. Hockenson. It should be a crime that he drafted all three of those first three stars, plus the fact that he projects for over 140 points heading into this bye week. If his projections remain that high, his team stays healthy, and his players play, there seems to be no way that the man who held the No. 1 spot in the power rankings heading into this week will lose out. Upsets are always fun to watch and are always possible, but our league’s No. 1 seed is a clear heavyweight.

There’s the full playoff breakdown folks! Expect weekly updates with who is still alive, along with a playoff recap and celebration of the league champion after Week 16.