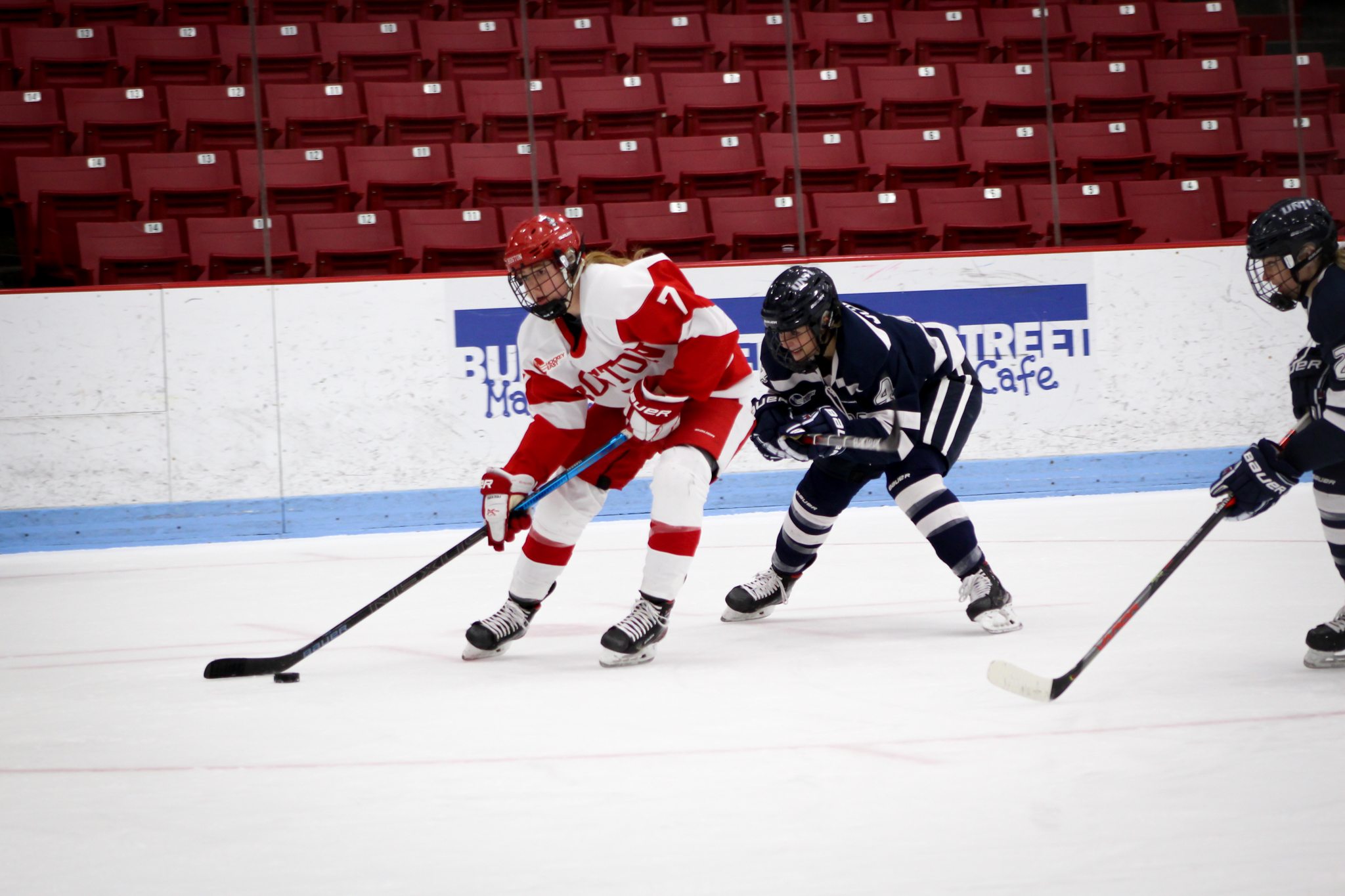 “In one word [tonight] was probably disappointing,” BU head coach Brian Durocher said following the game. “I thought we left a lot of sweat equity on the ice. We played hard and in some ways, might have played as well, or better, than yesterday. We just didn’t finish the job.”

For BU, junior goaltender Kate Stuart got the nod in net while redshirt junior netminder Ava Boutilier went for the Wildcats.

Both teams had some good pressure early with the Terriers in particular generating some dangerous scoring chances.

Senior assistant captain Kristina Schuler got a grade-A opportunity in the slot, but Boutilier was square to the shot and able to make the save. Later in the frame with BU on the power play, junior defender Alex Allan uncorked a one-timer from the point that pin-balled in front of the net, nearly trickling past Boutilier, but it slid wide.

With under two minutes to go in the period, UNH sophomore forward Annie Berry slipped between the BU defense for a golden opportunity, but Stuart’s sound positioning allowed her to make the save.

Second after that chance, the Terriers got the scoring started as freshman forward Claire O’Leary buried her own rebound off a one-timed a centering feed in the slot for her first collegiate goal with 1:15 to go in the opening frame.

“[O’Leary] just brings her practice to the games,” Durocher said. “She competes very hard and she seems to have poise with the puck. She was able to follow her own rebound and get a goal.”

Moments later with less than a minute remaining in the period, senior captain Jesse Compher doubled the lead for BU as she batted a rebound out of mid-air into the yawning cage.

Just 43 seconds after Clare opened the scoring, Jesse notched her second goal of the weekend. pic.twitter.com/gEwDkDHkOR

The two-goal advantage would hold for BU heading into the locker rooms after the first twenty minutes.

The second period proved to be vastly different than the first for BU. Just 1:53 into the period, UNH sophomore forward Tamara Thiérus notched her second of the weekend as her shot beat Stuart low on the stick side after finding a seam in between the BU defenders, pulling the Wildcats within one.

New Hampshire failed to capitalize on a power play opportunity, but it did not matter as Thiérus scored her second of the game, taking a cross-ice feed from Nicole Kelly and roofing a shot over Stuart’s right shoulder to tie the game at two apiece.

Minutes after Thiérus’ tally, junior forward Courtney Correia found herself on the doorstep, redirecting a shot from the point, but the deflection went right into the pads of Boutilier as BU failed to capitalize.

After the Terriers could not capitalize on the power play, Wildcats sophomore forward Jada Christian put UNH on top 3-2 with just 2:50 to go in the second. Christian’s backhand rang off the post before deflecting off the back off Stuart’s pads and into the net.

Heading into the third period, BU had failed to capitalize on all three of its power play opportunities, but Durocher is still fairly pleased with what he’s seen from his special teams group.

“I was really happy with the way they move the puck around today,” he said. “The only thing I think we might have missed out on was was getting a third person to the net.”

“We’ve got to continue to do a good job with with everybody. It’s not a one person or two person show. It’s got to be all five [skaters] working in unison.”

Early on in the final frame, the Terriers went to the power play once again. This time, Julia Nearis capitalized with her second of the season, taking a feed from senior assistant captain Kristina Schuler in the high slot and beating Boutilier to the glove side.

Here's a look at Julia Nearis' second goal of the weekend: pic.twitter.com/2nXaVNwPYI

The stalemate was short-lived, however. Lauren Martin put UNH back up 4-3 just 32 seconds later as Stuart could not contain the rebound off Emily Rickwood’s shot. The puck landed right on Martin’s tape, and she shoveled it into the open goal.

“After we had tied the game in the third period, that’s one that probably if we mark our people a little bit better, we could have kept that one out of the net, and given ourselves a chance to get out of here with a tie or a win late in the game,” Durocher said.

BU managed to generate some strong attacking zone time late in the game, but could not muster up a late tying goal as UNH held on for the win.

Stuart finished the evening with 26 saves, while Boutilier stopped 28 shots.

“For whatever reason, [Stuart] looked a whisker tight today, but we didn’t help her as well as I would have liked to have seen,” Durocher said.