Over the last two days, 29 members of the BU community tested positive for COVID-19. No other two-day span this semester has seen so many new positive tests.

The rise in cases could be related to the Thanksgiving holiday last week, in one way or another.

Testing centers at BU were closed for part of Wednesday and all of Thursday, so some of these new cases could be infections that BU would normally have caught a day or two earlier.

But the numbers could also signal the beginning of a dangerous spike. 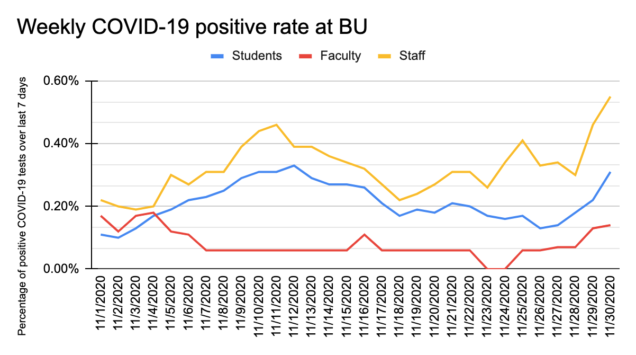 Public health officials at BU and beyond have been worried that Thanksgiving could cause a rise in COVID-19 cases. Usual traditions like traveling, gathering indoors, and having long meals with others while not wearing masks make it easy for the virus to spread.

Despite BU’s warnings, about a quarter of BU students living on campus went home for the break only to come back to campus this week. Another quarter of students chose to go home and stay there for the rest of the semester. The remaining half stayed on campus during the break.

That travel is starting to show up in testing data. The number of people getting tested for COVID-19 at BU is now at a record low. 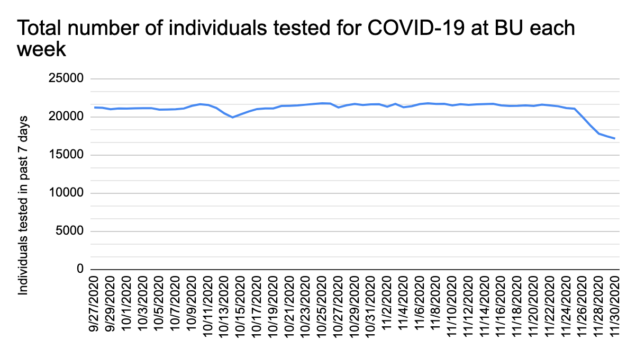 Students, the largest cohort on campus, saw the steepest drop in testing. The number of students getting tested over the last week was 22% lower than the week before.

Employees are only tested once a week, and the five-day holiday weekend could have interrupted some employees’ testing cadence, so the coming days could see a return to normal testing turnout for faculty and staff.

Meanwhile, the number of students getting tested will likely stay lower than usual, because some students who travelled for the break won’t be back until January.