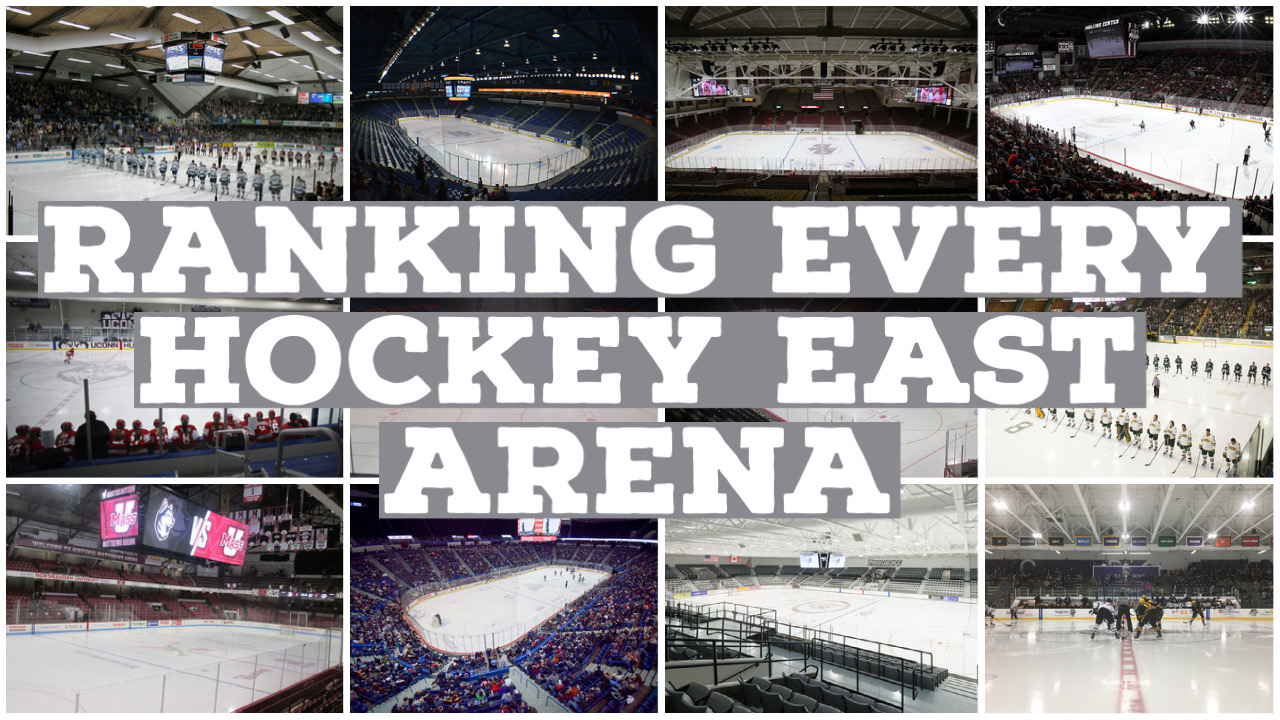 I’ve always been an amateur arena analyst. I love dissecting the designs of every venue I visit, and I’m confident that college hockey has the best range of sizes, styles and stories anywhere.

As a college hockey writer, I’ve had the opportunity to attend games at the majority of Hockey East’s arenas, and I’d like to think I have a good understanding of each of them. To me, every arena has its strengths and weaknesses, but some check more boxes than others.

When I explore a college hockey arena, I look for three things; character, amenities, and size, in that order. Few facilities excel in all three areas, but that’s what makes this collection so interesting. There is no objective order to define this list, but I’ll do my best to come up with one.

Here is my ranking of all 14 arenas in Hockey East.

Holy Cross is unique in that its women’s team plays in Hockey East while it’s men’s team does not — the only school where that is the case. Considering the Crusaders lack the history and prestige of most other programs, it’s hard to expect much from their home at Hart Center. That said, there are no pity points here, so this gloried community rink will have to be last on the list.

Much like Holy Cross, the UConn women’s team is forced to play in a venue that more closely resembles some practice rinks around college hockey than an actual division-one arena. At least it has a few rows of seats on all four sides, which is more than Hart Center can offer. Overall, Mark Edwards Freitas Ice Forum is a mouthful of a name for an underwhelming facility.

Merrimack did all they could with this undersized venue, but it’s hard to really qualify Lawler Rink as an arena. The seating sections are small but sufficient for the modest attendance, but this venue really comes up short behind the nets. Each end has a screen that looks like what the cool parents put on the side of their house to show movies, and only one end has stands.

As a BU hockey nerd, Walter Brown Arena is a special place. There’s so much history, so much charm, and a feeling of stepping inside a BU time machine. However, nostalgia only goes so far. In 2020, “Wally B” is among the most outdated arenas in the conference, with underwhelming amenities and few noticeable improvements from the glory days that put BU hockey on the map.

Whittemore Center is like trying to build Agganis Arena without the budget. It’s a straightforward design with identical sections all the way around, and the colors do little to salvage the boring layout. The center-ice videoboard is nice, but nothing really stands out to me about this arena. I will admit that I haven’t been there yet, but I won’t be hurrying to visit anytime soon.

By the looks of it, XL Center is an awesome arena — but not for college hockey. It’s the biggest arena in the conference, but UConn only sells tickets up to about half of its capacity. This former home of the NHL’s Hartford Whalers looks great for its age, but if you can’t come close to filling it, its size doesn’t mean much. Plus, it’s 40 minutes from UConn’s campus. No thanks.

Gutterson Fieldhouse is my favorite arena to visit. It’s the quintessential college hockey barn, with benches instead of seats, wood panelling across its curved roof, and elevated press boxes that are only accessible via ladder. The simple scoreboard is a classic, but it’s also representative of “The Gut” as a whole; vintage, for sure, but in need of a more modern renovation.

I’d love to put my home arena higher on this list, but it doesn’t deserve it. Clearly, the amenities are great and the size is impressive. However, Agganis Arena has very little character, obvious in its uniform seating sections, suites and concourse. Also, I’ve never understood the cut-out at ice level with folding chairs instead of seats. Agganis is built for an AHL team, not a university.

If you take Agganis Arena and add a couple quirks, you get Tsongas Center. The lobby, concourse, and seating bowl are all exactly the same, but Tsongas gets the edge with a cool club pavilion area replacing the stands in one corner. The dark blue and green colors need updating and the press box is tiny, but at least it has more individuality than its Boston-based twin.

Leave it to the people of rural Maine to come up with this glorious monstrosity. The opportunity to visit Alfond Arena actually had me rooting for BU to draw Maine in last year’s playoffs before the world ended. This visual wonder somehow packs more than 5,000 fans into its small footprint, and its roof design is one-of-a-kind. The only clear blemish is the outdated scoreboard.

Conte Forum is a study in creative architecture. The east end of the arena is set under the upper deck of the neighboring Alumni Stadium, causing the unique overhangs that jut out over the ice. The videoboards fit these unusual features nicely, but I can’t get past the awkward angles they create, the poor lighting around the arena, and its bland color scheme.

Mullins Center is like Conte Forum on steroids. There are three massive videoboards to serve the largest arena capacity in Hockey East, and the wide rows of bleachers on each side seemingly ascend forever (and I would know; the press box is at the very top). My only complaint for this cavernous stadium is that the higher you go, the worse the view gets.

Despite its small size, Schneider Arena has plenty of things to like. The seating bowl features an effective 360-degree design and an eye-catching color pattern, and even though the ceiling is a little low, the sleek all-white color scheme and great lighting more than make up for it. I also love the compact jumbotron, using rectangular screens rather than the traditional squares.

Matthews Arena is the oldest venue in Hockey East and the world, for that matter, and it is perfect. It has the history, obviously, and its structure is timeless, with an old-fashioned upper deck that seemingly hangs over the ice. It also has a modern touch with its outrageous overhead jumbotron. During hockey season, this incredible venue is an absolute must-visit.