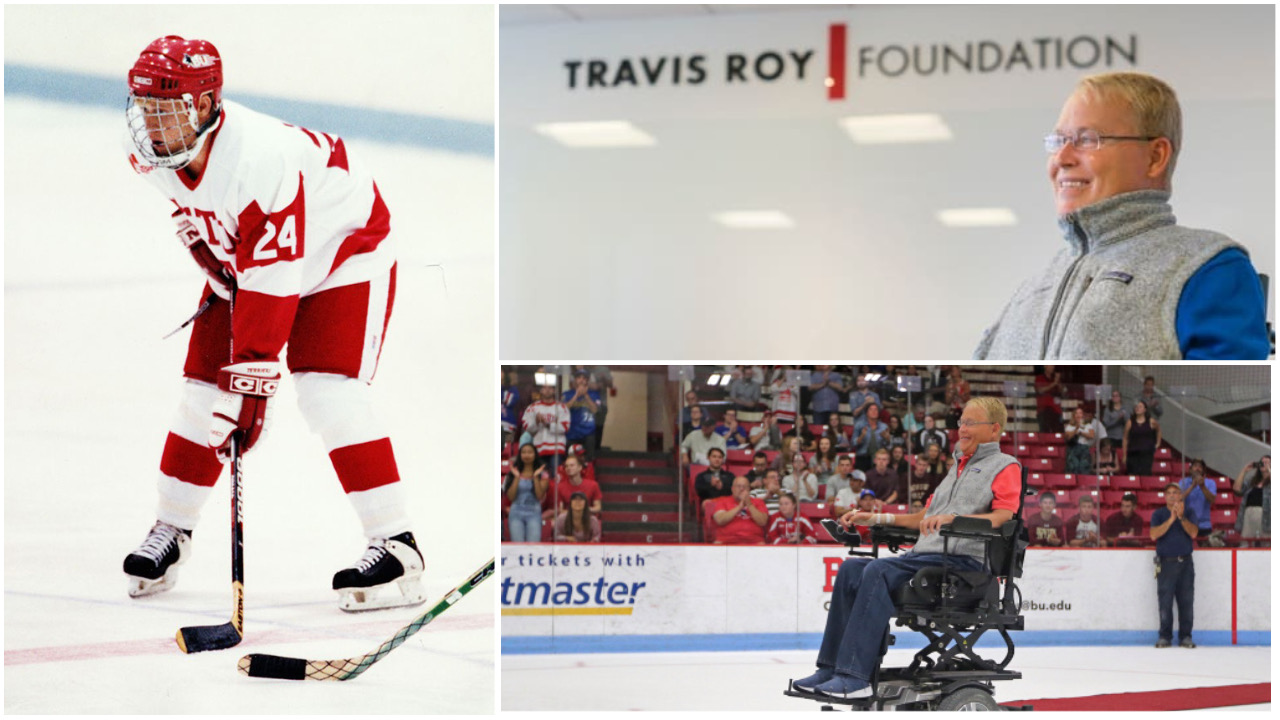 Travis Roy, who was paralyzed after sustaining a spinal cord injury just 11 seconds into his first shift as a Boston University Terrier, has died after complications of his paralysis, a family spokesperson confirmed on Thursday. He was 45.

“We are heartbroken to announce that our Founder and friend Travis Roy died today,” the Travis Roy Foundation said via Twitter. “Details will follow in the coming days.”

As reported by Kevin Cullen of the Boston Globe, Roy had to undergo surgery due to complications of his paralysis. On Thursday, Roy was rushed to the University of Vermont Medical Center for emergency surgery after complications from the previous procedure.

As a freshman coming out of Tabor Academy, Roy went in on the forecheck against a University of North Dakota skater during the Terrier’s season-opener in 1995, fresh off a national title from the prior year. The Yarmouth, Maine, native fell and collided awkwardly with the boards, resulting in instant paralysis from the neck down after crushing his fourth and fifth cervical vertebrae.

“Those 11 seconds at Walter Brown Arena playing for Boston University were the best 11 seconds of my life,” Roy once said.

“It is with heavy hearts that we mourn the passing of Travis Roy,” BU Athletics said in a statement. “His story is the epitome of inspiration and courage, and he was a role model and a hero to so many people. Travis’ work and dedication towards helping fellow spinal cord-injury survivors is nothing short of amazing. His legacy will last forever, not just within the Boston University community, but with the countless lives he has impacted across the country. Our sincere thoughts are with his wonderful family as well as his vast support group of friends and colleagues.”

Roy would go on to lead a life that touched the lives of so many around him, no matter the fact that he was wheelchair-bound. He became a pillar in the community as his work with his foundation raised millions of dollars and awareness for spinal cord injury initiatives and research.

A fervent activist and spokesperson for spinal cord injury awareness, Roy spoke to numerous NHL teams and other groups throughout the years, refusing to allow his life to be defined by a single moment.

Roy’s number, 24, was retired by BU in 1999, the first time a number had ever been retired by the program. He was a fixture during hockey games at Agganis Arena and Walter Brown Arena throughout the years.

Twitter was inundated with an outpouring of grief and appreciation for Roy’s life after the news broke Thursday.

Countless conversations, emails, texts with my friend. He just loved to talk hockey. Frozen in that chair always tightened my chest with sadness. But, he became a pass first human improving the life of many with his grit and relentlessness. Travis Roy was 45. Skate again, my man. pic.twitter.com/nuiMCffDEa

You were an inspiration to so many in the BU community and beyond. You will be sorely missed, but your legacy of kindness, generosity, and perseverance will stay with us forever. pic.twitter.com/fTop1ooPHs

A statement from Bruins President Cam Neely on the passing of Travis Roy. pic.twitter.com/kOtthdVAJD

This developing story will be updated.