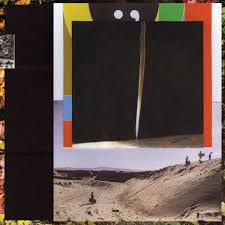 i,i opens with muttering and screeching synths in its opener “Yi”. Supposedly, Justin Vernon and a friend used something as simple as an iPhone to craft this crazy hip-hop tune. “Yi” doesn’t feel like a fully fleshed out song in any way, but is able to pull the listener in. From then on, the album is successful in blending songs into one another, creating a story throughout the experimental project. The overall feeling is just as personal as any of Vernon’s other releases.

“iMi” takes the chaos of “Yi” and transcends a simple iPhone experimentation in a grand way. It is clear this album is going to follow the steps of 22, A Million in its electronic departure from Vernon’s previous releases. For Emma, Forever Ago feels forever ago, Vernon taking bold leaps with i,i.

The album changes genres with the flick of a switch. Rhythms pick up and slow down; “We” feels dangerous and darkly claustrophobic even when the vocals heighten, while “Holyfields” is repetitive and soulful like a hymn. Vernon sings about the “contentness” of being discontent; he has moved past the one-note depression of his first two projects. Simply calling this experimental folk seems disrespectful. In shows, he wears giant headphones as an art-pop DJ; he is even physically more artistically ambitious than ever before.

Melodically, the album washes together and the songs begin to sound similar. There is no longer what some might call, “the classic depressing Bon Iver song” (Skinny Love) or “the sit out by a tree Bon Iver song” (Re:Stacks), everything works and flows together more continuously. “Jelmore” bursts from the seams in a hallucinogenic daze, the synths bubbling and squeaking. “Sh’Diah”, undeniably the best song on the album, uses a saxophone to meditatively manifest the feeling of sitting in the backseat of a car, watching the trees go by endlessly; life-affirming is the word to describe it.

The lyrical standouts on the album are clearly “Hey, Ma” and “Faith.” The former is nostalgic; Vernon sings to his mother while a metronome beeps. The latter is maybe even more uplifting; it breaks barriers and it is this album’s equivalent of “8 Circle,” from 22, A Million.