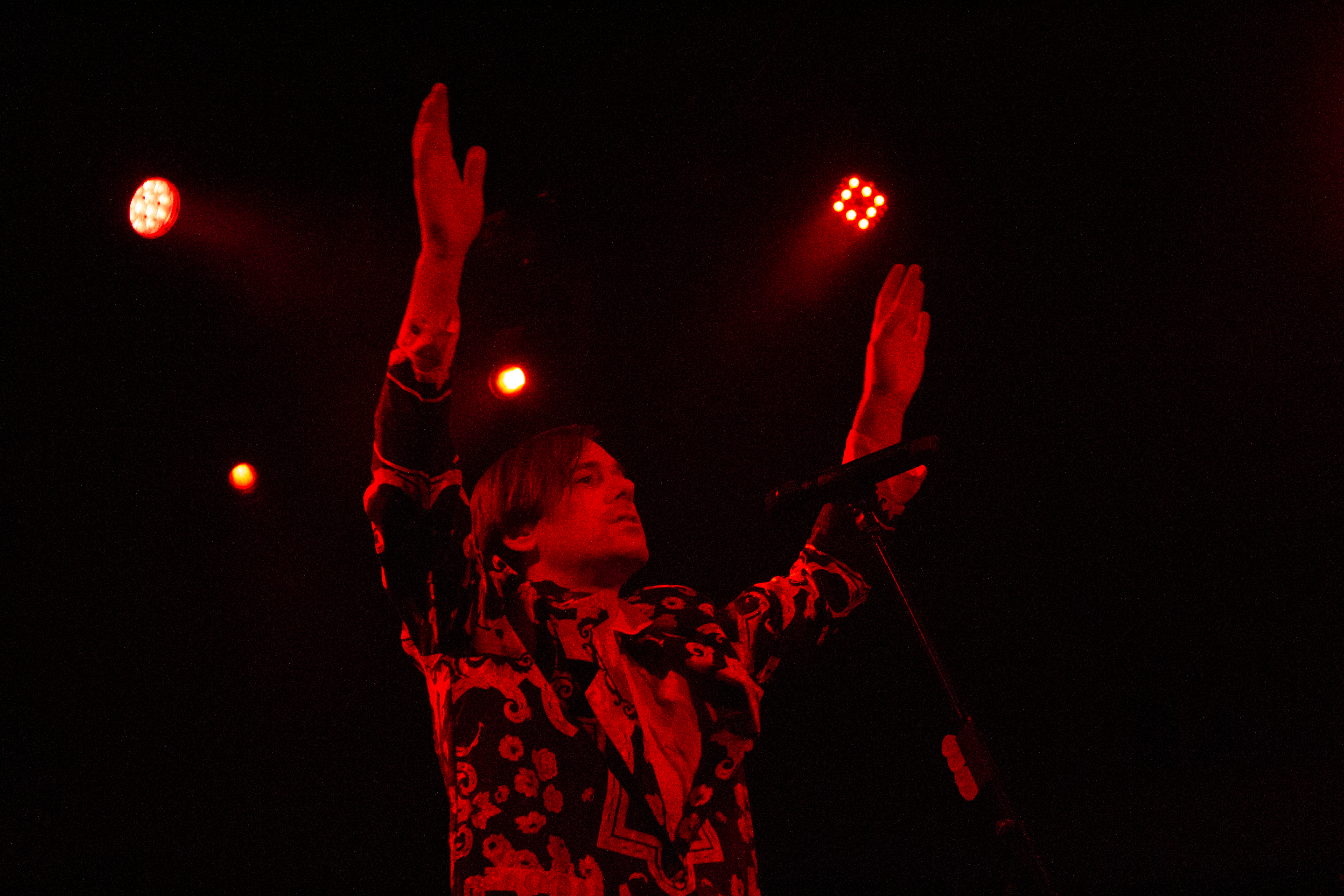 WTBU’s Ioanna Karageorge chatted with Of Montreal frontman Kevin Barnes ahead of the band’s show at The Sinclair on March 3.

IK: I’ve been listening to Of Montreal since early high school, love you guys. And for me, my favorite album is Cherry Peel, and I was wondering what the reason for the radical transition from how stripped down Cherry Peel is to now the production on your newer stuff is?

KB: I guess just whatever a normal creative evolution you know like, I kind of think of those early records as sort of mirroring my childhood, in a way. I mean, it all started off all childlike and this sort of wide-eyed innocence on Cherry Peel and [The Bedside Drama:] A Petite Tragedy and The Gay Parade and Coquelicot [Asleep in the Poppies: A Variety of Whimsical Verse]. Those are all like really whimsical and like sweet and fantastical, in a way, and then sort of when I had my first serious relationship, which is weird to say but I was like 28 or something before I had my first serious relationship. I started entering more into the adult world and had a child when I was like thirty and so that definitely influenced me and put me more into the physical world. So, I think those things definitely impacted me and what I was doing musically and then also just having this restless creative spirit and like always wanting to search for something new, some new form of inspiration and explore different genres and different production styles and things like that.

IK: So, is every Of Montreal album a “Kevin Barnes” album, or are there other collaborators, or is it just you primarily?

KB: Well, I’m like the one central figure in all of it. But then I do occasionally have other people contributing and sometimes helping me in the recordings, but for the most part it has been— well probably more like 30-70 as far as having other people involved and sometimes when I do it all by myself.

IK: So, I feel like this is just a symptom of being in the public eye, but I know your girlfriend, Christina, obviously in the new album she has been a main focus, but has she been helpful in the music production and creation of it or is she more just an inspiration or muse?

KB: Well, I respect her a lot as a songwriter so as I am working on things and figuring out the arrangements for songs at their earlier stages when its just on acoustic guitar or piano or whatever, I’ll play it for her and get her feedback and she has helped me a lot like “Oh, you should probably spend more time on the lyrics of that part,” or “maybe that thing shouldn’t repeat so many times” or whatever you know. And so in that way she’s been influential and helpful. And I just think that since we live together and so were consuming the same media like listening to the same music and watching the same movies together and being influenced by all those things together. And also I’m helping her out with her music and producing her record so I kind of feel like they’re all sort of melting into one.

IK: Another thing I noticed while listening to the album was really obscure references that I was on Genius Lyrics trying to figure out “what does that mean?” So, in your songwriting do you pepper in those little references as inside jokes with people or just like a reference to yourself that in that time you were into that thing?

KB: Yeah, it’s like more the latter. The things that I’m into, the things that are inspiring me make it into the songs because in a lot of ways I view each record as sort of a journal record of a certain time in my life. And so instead of keeping a journal and being like “I found out about Diamanda Galás today,” putting that into the song is just like writing into a journal or something.

IK: Along with that I guess, you’ve been doing the music thing for quite a while and I guess would you say that the thing that compels you to make a new album each time is an event that you need to document or is it like more of a free-flowing continuous thing?

KB: Well, often if I am going through a difficult, personal struggle then that will inform the music I make and will sort of inspire me, or I sort of use it as a form of therapy sometimes like if I’m going through some dark period. And then other times, like more recently, I’ve been pretty happy and so I still find inspiration in that.

IK: Yeah, that’s sick! I feel like happy music is one of the, at least for me, one of the hardest things to make.

KB: Yeah, totally, I feel more vulnerable writing about a happy thing that’s going on in my life than a negative thing because the negative thing seems like you have this like weapon or something, but then if you’re singing about something more positive there’s nothing to protect you, which is weird. It does show how fucked up we are.

IK: It’s like how some of you’re songs are about the current political climate and I feel like the themes of “UR FUN” are split between a love song album and a political/cultural critique and how do you reconcile those two things together?

KB: I guess I just let them exist side by side and cause yeah, it seems like the first half of the record makes sense that it’s called “UR FUN” and the second half doesn’t really because the second half is dealing with self-harm and like you said the political state and what sort of might be considered more darker concepts. But I think it still works just because that is the human experience, there’s going to be light and dark and pain and joy and it’s just hard for me to maintain one energy for too long, I think most people probably feel the same way and so I couldn’t really make a super fun, lighthearted record all the way through so it’s just too much. By the end it was like bleh, were done.

IK: I was wondering if there’s any new bands you’ve found floating around that psych pop genre that are doing something cool?

KB: Yeah, it’s kind of  weird because I mostly listen to older things for whatever reason I just feel like its more easier romanticize older things because they don’t exist anymore, but like I do always forget and am like “wait have I even listened to a song in like six weeks?” Like music all around all the time and I don’t know like a new band well like the band we’re touring with Lilly’s Band.

KB: Yeah, I love Palberta and Lilly and Horn Horse and then this thing is a new thing, Lilly’s Band, and so yeah it’s cool to hear that stuff and like as far as other people I think Ariel Pink is always exciting. He’s probably my favorite, MGMT, and Ariel Pink and Deerhoof. I like the Mild High Club, yeah there’s a lot of good stuff.

IK: Yeah, those are all bangers! Everybody in that list. I feel like I got to everything I wanted to say.