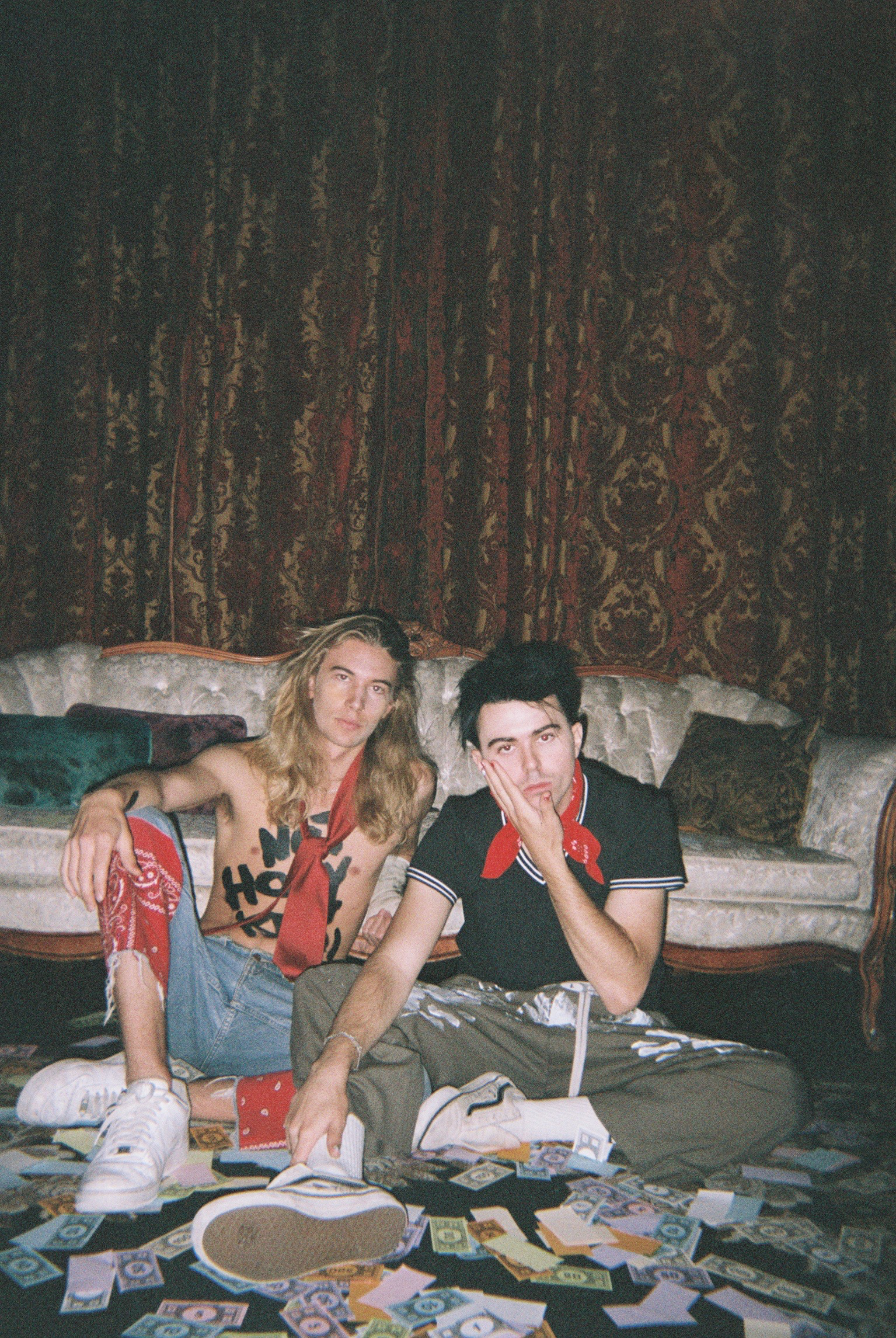 WTBU journalist Grace Lauson chatted with X Lovers, a pop duo consisting of London Jackson and Jacob Ames. X Lovers released their first EP, “Virgin”, back in November. You can listen to their music here.

GL: I know you guys must be very busy and this may be a difficult question, but can you walk me through what an average day in your life is like?

Jacob Ames (JA): There are two main types of days. The first is on tour. This is where every waking moment is working. So, we wake up and drive for a few hours. In the car, we work on music. Then, before the soundcheck, we try to do a few interviews and meet any fans who are at the venue. Next, we do soundcheck and play the show. After the show, we always stay and meet every fan we can. On the other hand, if we are not touring, we basically just work on music. We work out of my house because we have a studio in my bedroom. At home, we will wake up and literally work on music until we fall asleep. It’s pretty much all we do. We are literally obsessed with it.

JA: I think it’s just the way we both are by nature. I don’t know what we would do without it. It’s not even so much that I enjoy it or don’t enjoy it. It’s just the way it is and I can’t see it being any other way.

GL: I know this is such a dream come true for you but did you ever think about doing anything other than music?

London Jackson (LJ): We met when we were 10 years old and I was writing songs at the time. Jake started to drum to my songs. I so vividly remember the first time we ever played music together. We looked at each other and said that we were going to take over the fucking world. That kind of energy and mindset just never changed. We always had that since we were 10. So, we never had our eyes set on anything else.

GL: Did it take a lot of time, at first, to find a sound that worked for both of you?

JA: Because we met so young, it’s been a constant development over the last 10 years. We are still always changing our sound.

GL: What is the main difference between both of your roles in X Lovers because I know one of you has more of a background in vocals and the other in producing.

LJ: I write 100% of the music. It’s just always what I’ve done. Jake has always had a very natural edge with making a track sound really good. It naturally evolved into me writing the songs and Jake producing the songs when the time came that we were getting a lot more serious about the music. When we decided to produce our own music, we officially divided roles.

JA: When I was younger, I had a huge passion for writing. However, when we started to be interested in producing our music ourselves, I found a home in that. I am always curious to learn more. Even though the technical stuff can be really boring, I still found myself really interested. It just led us to a really good dynamic.

LJ: We have a really nice dynamic between Jake and I. I think my strong suit is having a general vision. This means, making decisions about what we are going to do and big steps forward with writing the songs. On the other hand, Jake is a very detail-oriented person. It just made sense that his natural path led him to music production.

GL: I know you guys released your first EP back in November. Can you tell me a little bit more about the process of making that EP? Was it lengthy?

LJ: Honestly, the first EP was really challenging. This is because we had put out a  few songs a couple of months prior that really grew our career from nothing to something. So, going into the EP, we felt a ton of pressure. It definitely took a while, like 3-4 months, to really tap into it. About a month or two before the release, we went back to our hometown in Northern California and really got into the zone. We literally made the bulk of the EP in my bedroom. It was just the way we always did it. I wrote all the music and it became a very vulnerable project for me because my dad was diagnosed with a terminal illness. So, a lot of the EP was rooted in that. I think Jake’s focus for the EP was really hearing the songs and letting them speak for themselves.

GL: Do you run the music by a lot of people before putting it out or is it really just the two of you finalizing the track?

JA: During the creation of our music, we try to keep things completely just Jake and I. This is because, whether someone has a positive or negative reaction to the music doesn’t really help us. That kind of initial reaction just gets in our head. Also, if someone is gassing us up, we might start getting lazy and thinking that a track is done rather than Jake and I obsessing over every detail. Also, if someone says a song we’ve been working on is horrible, it really destroys our confidence. So, during the creative process, we really try putting our blinders up and honing in on making music that we are 100% obsessed with. Then, when we feel like the music is done, we bring it to our manager as well as our label. They kind of help us curate it but during the creative process, we keep it 100% just us.

GL: Do you have a preference between making music and touring?

LJ: They are super different. How I usually explain making music is that it is not always something I want to do but something I feel like I have to do. For example, if I am feeling an emotion or going through something, I will feel like I have to write a song. It’s really something that life naturally draws me to. Whereas touring, is like a gift. It is the reward of writing music. It is extremely fun. So, on a fun level, I definitely prefer touring. It’s something we look forward to. Whereas, making music is something I need. They both provide something really different and really special to both of us.

JA: For the first few shows, I was basically nervous the entire day leading up the performance. Now, I get super nervous 5 minutes before the show. However, it’s mostly excitement because performing is really our favorite thing.

GL: Before moving to Los Angeles, was it always a goal for the two of you to make it there and what changed once you finally made the move?

JA: We grew up in a tiny town in Northern California with just 3000 people. Moving to LA just really woke us up to how many amazing artists there are in the world and showed us that we have to work extremely hard to make music happen for us. Also, when we moved down there we became hyper-competitive. We really locked ourselves in our first apartment for 2 years straight and worked all day, every day. I think LA really instilled that extreme work ethic into us. It gave us the mindset that we aren’t special and we really have to work to make ourselves stand out. They only thing we could control is how hard we worked.

GL: Do you get many days off where you aren’t around each other or is it mostly joint work time?

LJ: We definitely try to stay as busy as possible. We feel like everything we ever dreamed of is in reach right now and we are going to do everything possible to make that happen. So, we don’t really take many days off. However, right now we have a few free days in between shows. So, I am actually sitting in Washington DC hanging with one of my best friends and Jake is in Chicago. I am going to meet him there in a couple days. We know it is important to take days off here and there but, for the most part, we just love working. It’s really all we want to do.

JA:  We have had a lot of time to listen to music in the car. So, we have been listening to a lot of stuff from when we were kids like Green Day and Beach Boys

LF: I’ve been listening to a lot of Stormzy. He’s a great rapper who works out of the UK. We also listen to a lot of The Smashing Pumpkins and BROCKHAMPTON. We kind of create the same way we consume. So, we listen to a million different things constantly and I think our music is somewhat indicative of that.

GL: I know you are touring for the next few weeks or so but what’s next for you? What do we have to look forward to?

LF: We are finishing our second EP right now. So, we are extremely excited about that. It really seems like a massive step forward from the first one, which is really exciting to see. We thought that was going to be really hard to achieve but it really just naturally evolved into what it is. We will also probably hop on another tour very soon. So, fans can definitely look forward to that!

X Lovers are currently on tour. Tickets can be purchased here.