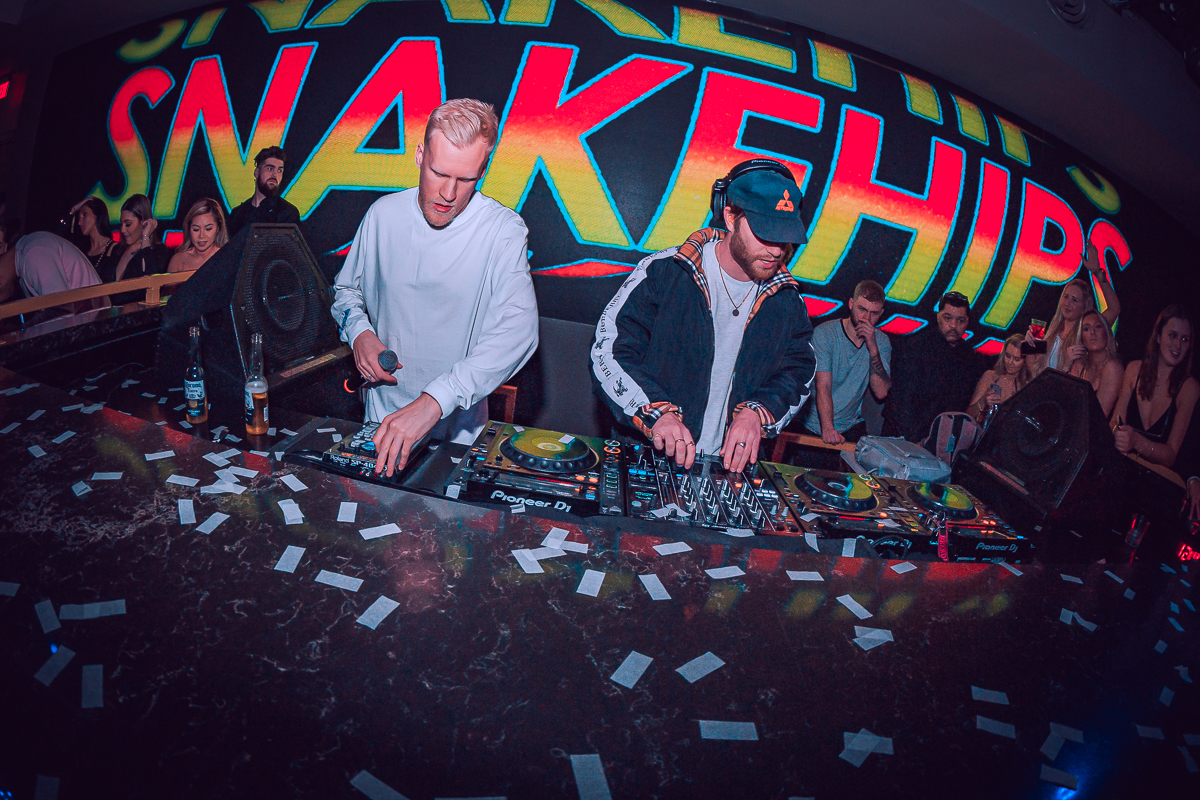 WTBU journalist Grace Lauson chatted with Oliver Lee, who makes up ½ of the Snakehips DJ duo.

GL: I know you guys must be very busy and this may be a difficult question, but can you walk me through what an average day in your life is like?

OL: Yeah, I mean it’s difficult because there’s a lot of disparity between different days. Sometimes, I have a studio day where I’m busy doing different sessions. Then there are days like the last few that I’ve literally just sat in my hotel room in New York City because it’s been raining all day and I can’t be bothered to go out. I don’t know, it’s a difficult one. Sometimes I just sit down and make beats all day and sometimes I’m just rushing around.

OL: I don’t really mind it. I feel like there are always a few rough days, like when I have loads of meetings. Usually, there is so much variation in what I do that I am never doing one thing too much. For example, sometimes I will have a really busy week in the studio but I know that I will be flying somewhere on Friday and have some time to do something else. So, there is definitely enough variation in it all. I never get too freaked out.

GL: Do you prefer touring or making music?

OL:  I love all of it. Sometimes, it can be really frustrating if you just started working on a tune and then you suddenly have to go away for 5 days. I just know I never will have much time to work on music when I’m traveling. That can be a bit frustrating when you are really in a good groove with the production. You just always have to take time off because you can’t really do it on the road. I don’t really prefer one over the other, it’s all fun. It’s just different sides of it.

GL: I know you have played some festivals in the past. Do you prefer playing your own shows or festivals more?

OL: I don’t know. We love playing club shows. Sometimes, you get a club event where  the vibe is just right and the energy is so cool. You never know what a show is going to be like. Some festivals can be really crazy as well. I don’t know if we have a preference, it’s all fun.

OL: Sometimes. James definitely gets well anxious. I kind of have to hold it down because James will be pacing around the green room hours before the show. He’s a nervous person but I don’t even know if he’s nervous about the show. He’s just a bit weird like that.

GL: Was there an instant musical connection when you first both worked in the studio together or did it take a lot of time at first to find a sound that worked for both of you?

OL: Musically it was always quite clear that we got on. In that sense, it definitely worked from the start because our different ways of working went really well together. So, from the beginning, we just really understood each other.

GL: Have you been working with the same team of people from the beginning or is that always evolving and growing?

OL: We recently changed our management team but we had pretty much the same team for 7 years. We are occasionally adding people on when there is new business to deal with but we usually like to keep the team full of people we are really close with. It’s just really nice to work with people you know.

GL: I know you have had a variety of collaborations on your tracks. How did these collaborations come about and what was it like to work with these artists?

OL: It’s kind of different every time. There’ve been a few where we have written the whole song and just sent it out to the singer. Then there’s some where we have a free verse on something and we send it to someone asking if they would want to write a verse on it. Ideally, we would like to get in the studio with them at the beginning so we can build tracks from scratch together. However, just because of how much we travel and us being based in London, it’s not always possible.

GL: Do you often know these artists before or is it more of you guys reaching out to anyone you think would sound good?

OL: Nowadays we do know most of the people. Many of our earlier tunes were big collaborations with people that we mainly didn’t know. Those were more of us reaching out to our favorite singers at the time. We definitely didn’t know anybody at the start though.

GL: Can you notice a distinct difference between crowds? For example,  if you are playing somewhere overseas versus an American crowd?

OL: Sometimes. I feel like American crowds are always a bit more fun but I think it’s just that they have a bit more energy out there. Then there are some places you will go where people think they are too cool to dance. You can’t always judge the crowd just by where you are at though. Sometimes, it’s just the vibe of the place.

GL: I know this is such a dream come true for you but did you ever think about doing anything other than music?

OL: I don’t know what else I would do, to be honest. I don’t have many other transferable skills.

GL: How did you first get into music?

OL: I don’t really know. I just like making beats and putting them on Soundcloud. When I was starting out, I had a lot of friends who were doing similar things. I also had some friends that were getting into music management. So, I had a really good group around me when I started getting loads of hits one Soundclouds. I had friends that said, “Hey, let me introduce you to this person”. So, it was kind of just having a good network of people. When my music started popping off, I kind of knew what the right thing to do was in terms of the business side.

GL: Is there ever a way for you guys to predict what songs are going to have success? Like with your most popular song, “All My Friends”, did you have a feeling that that song was going to be a hit before you released it?

OL: No. We had no idea. We just spend so long making the track that it just gets confusing after a while. You know when you have just heard a song so many times. You go through so many different emotions with it. You can be like, “Okay, I think this is cool but maybe it’s awful”. You have literally no idea until you put it out there and see people’s reactions. It’s pretty confusing.

GL: Do you run the music by a lot of people before putting it out or is it really just you guys finalizing the track?

OL: Sometimes. We have a few people that we work with on a musical level that we will get feedback from if we’re struggling. James and I have a pretty good idea of what we want it to sound like. It’s mainly trying to figure stuff out. We will occasionally play stuff for people to see what they think.

GL: Do you have any hobbies that aren’t musically oriented?

GL: Do you get many days off where you and James aren’t around each other or is it mostly joint time?

OL: At the moment, we have so much work but we do occasionally. Especially when we are traveling to somewhere we have never been before. We always get excited to hang out, just kick it, and do some fun shit as well. It’s not all business.

OL: I really like this singer called REI AMI. She’s really sick. I also like Medicine and this guy called Quickly, Quickly. Emotional Oranges are really sick as well. There is so much cool music out at the moment and there is so much on my playlist. I just listen to whatever I like.

GL: I know you are touring for the next month or so but what’s next for you? What do we have to look forward to?

Snakehips is currently on tour. Tickets can be purchased here.