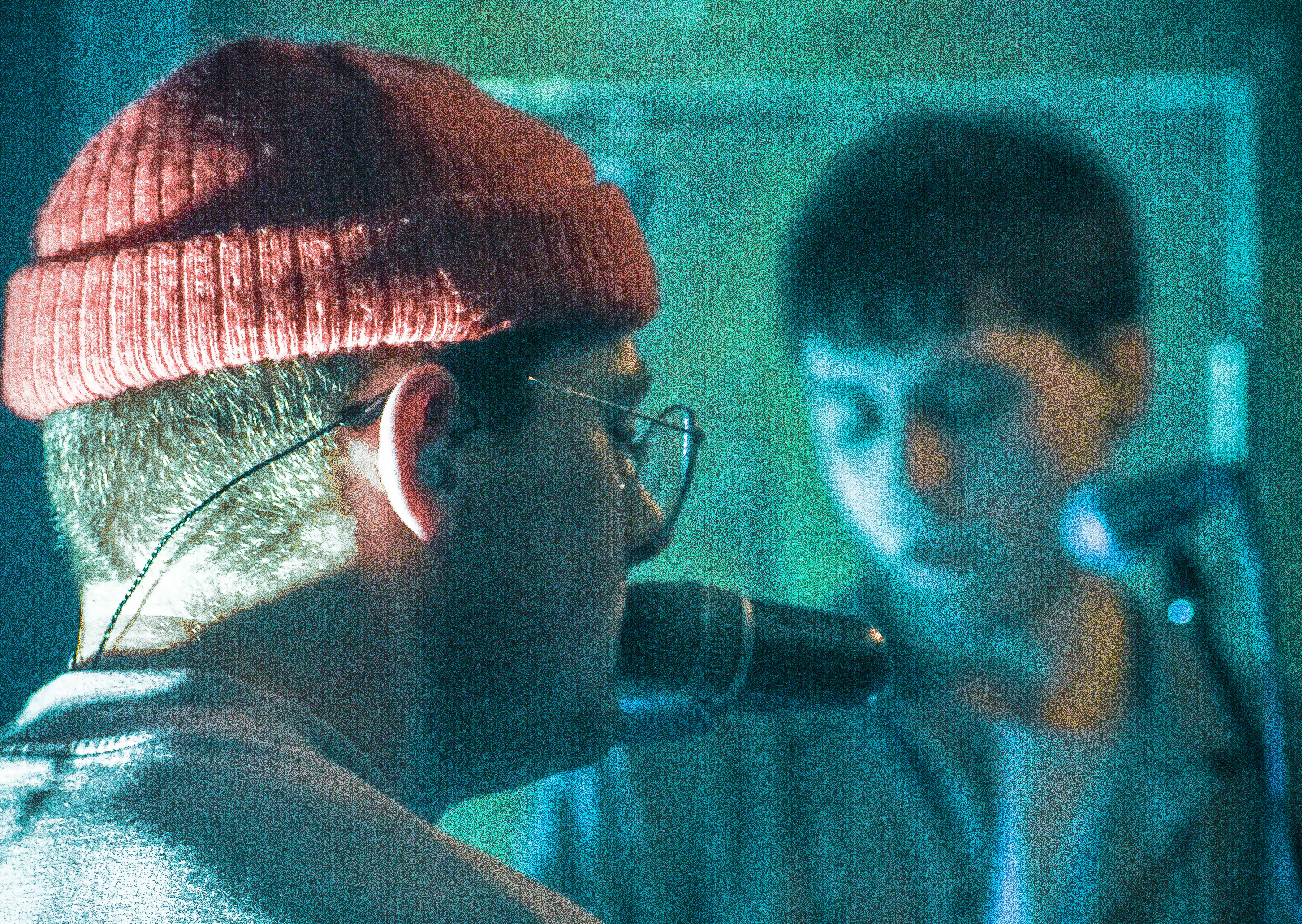 Indie-pop band joan has been traversing the world for the past three years supporting other artists, but this winter they’ve taken off on a headlining tour of their own.  WTBU DJ and photographer Monica Sucic sat down to talk with the duo before their show at Great Scott on Feb. 9.

Monica Sucic: Congratulations on this being your first headlining tour! I know it’s only been a few days so far, but what’s been your favorite stop?

Steven Rutherford: The crowd in Atlanta was insane, and in DC, actually. DC was last night and it was bonkers. Any of the big music cities can sometimes feel a little more reserved, but [Nashville] felt really good.

MS: Which venue or city are you most excited for?

AT: We’re doing two shows in one night in LA, so that’ll be really interesting to see. But I’m excited for it! Also, Salt Lake City’s always really good. Salt Lake is just a beautiful place.

MS: What’s been different about this tour compared to the previous ones?

AT: We’ve always been able to fit all of our gear in our van, and this time we have production and lighting and all this new stuff so we had to bring a trailer. It’s been a different thing to figure out every day. We also have a lot more time. We get to the venue, and we check, and then we have a bunch of time to just chill and get stuff together, so that’s nice.

MS: What’s the most important thing that you’ve learned so far on tour?

AT: Every staff that we’ve dealt with has been nice. Even when we were supporting, our philosophy has always been to be really kind and really supportive of the staff because they’re the ones who have to stay past and clean up trash. It’s tough on the bands, obviously, because we’re traveling the country but it’s just as tough on them to do it every single night, night after night. Being kind to the staff and thanking them and being encouraging to them has been a priority for us from day one, and we’re trying to really be conscious of it now that we’re headlining. They probably see all sorts of different personalities — artists that are awesome and artists that are divas — we’re trying to not be [divas].

MS: In the past, you’ve opened for groups like Half-Alive and Flor, which group has been your favorite to tour with?

MS: If you could collaborate with any artist, living or dead, who would it be?

AT: Why don’t we do living and dead to make it interesting? Dead… I would say Prince probably. Even if I could just sit and watch him dial in guitar tones I feel like that would be awesome. Living for me would probably be a producer, not an artist. Probably Max Martin, just because, again, I would want to watch him do his thing and soak it in and try to learn.

MS: You’ve been releasing music under the name joan for just over three years now, what inspired you guys to work together?

AT: We were both in different bands, and both bands were reaching a slow down point. He was graduating college and I was doing music full time. We got together to write one time for film and TV kind of music, just generic, ‘Let’s see what happens,’ and we wrote ‘Take Me On,’ our first single. The first day. So we were like, ‘Oh! This is something.’

MS: What’s been your favorite release of yours so far?

AT: I’d say portra as a whole. That was a cool one because we started joan and we just wanted to make songs and release songs, then three or four songs in we were like, ‘We’re writing an EP and we didn’t even realize it.’ It just made sense, all of them together. We switched our goal and ended up finishing that EP and making a release strategy for all that.

SR: Some new tunes, lot’s of touring… those are the two things bands do I guess. [laughs]

AT: We’re playing new songs each show, and we’re hoping to release those soon-ish. We don’t know exactly when, but we’re super stoked about that.

MS: And finally, if you could get a tattoo for any artist, album, or song, what would it be and why?

AT: That’s tough. It would probably be a Death Cab for Cutie reference. It would definitely be off of The Photo Album, which is my favorite album of theirs. I’m trying to think of what song I would do. Oh! It’s a long phrase, but “Everybody put your best suit or dress on, let’s make believe we are wealthy for just this once.” Because it’s true, we all do it. We all dress up and go out on New Year’s like we’re all rich and we’re not.

SR: I would get just the artwork for Aaron Carter’s first album; he was very influential to me. [both laugh]

joan will be on tour across the country until the beginning of next month. Their first EP, portra, is out now.