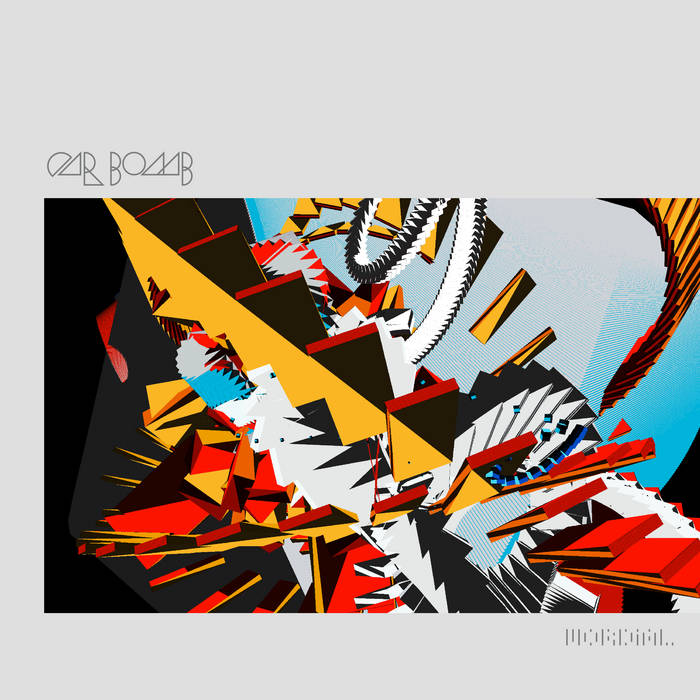 Car Bomb’s latest release proves why the “core” genres aren’t to be taken lightly. The album is a full frontal assault on the ears and leaves listeners gasping for air but hungry for more. The mathcore band from Long Island had the daunting task of following up their beloved 2016 release, “Meta.” Yet Mordial manages to follow up the album successfully and take their crushing, psychotic sound even further. Influences such as Gojira, Meshuggah, and Dillinger Escape Plan are truly evident on this album. They’re heard in the chaos of tracks such as Dissect Yourself. While retaining some classic alt metal influences like Faith No More and Deftones. This is present in songs like Fade Out and Mordial. This 12-track, 46-minute album starts off with the appropriately titled track, “Start.” This 44 second opener leads with an eerie synth intro that’s reminiscent of a horror/thriller film. It sets an ambient and calm tone before “Fade Out” comes in, taking the album from 0 to 120. The intensity is only softened by the clean vocals on the chorus, keeping in line with other “core genres. But, don’t mistake this as stereotypical metalcore. The clean vocals merely slow the truck heading for listeners ears from 85 to 84.

Tracks like “Vague Skies” and “Scattered Sprites” offer no forgiveness as they sonically crush everything in their path. The breakdown about 1:30 into “Scattered Sprites” sound like the guitars are melting themselves. It proceeds to close the track with a solo that sounds as dissonant and bizarre as the rest of the album, while being melodic. The shortest song, “Dissect Yourself” is arguably the most WTF song on the album. It starts out a bit more like traditional heavy metal than the rest of the songs. But then either a synth or a guitar comes in that sounds like a ray gun to confuse the hell out of you. It sounds like someone’s having a seizure on the keyboard. This is only juxtaposed with heavy riffs to the clean vocals. It keeps up these bizarre sounds only to end sounding like some Aphex Twin song.

“Xoxoy” succeeds with some more heavy, headbangable stuff only to break it down in the middle as dreamy and spacy sounding with Courtney Swain’s vocals on top. The safest on song on this record is probably “Hela” as it sounds like the most textbook metalcore song. But, that’s not necessarily a bad thing. After about 20 minutes of bizarrely intense, heavy, and unique sounds, Hela does a good job of grounding the album a bit more. “Blackened Battery” plays with time signatures in an abrupt, unforgiving manner. The title itself could potentially be in reference to the Metallica song, “Blackened,” as the breakdown kind of sounds like Blackened’s. But this is not plagiarism or theft by any means. The band remains unique and the song’s similarity to Blackened is the same as cheese’s similarity to milk. What kind of psychopath would pour milk on their crackers?

The title track opens with the soft plucking of guitar strings quite unlike the rest of the album up to this point. If anything, it sounds more in line with something from Sepultura’s Roots. The drums then come pounding in to get right down to business. There is a sort of break in the music like dubstep after the mostly clean vocals. When the guitar breakdown comes along, it comes with some weird effect. It basically sounds like Eruption from the year 5040 A.D.

The band displays a wide array of influences as some black metal-esque tremolo appears on “Eyecide.” The penultimate track, “Antipatterns” is the longest song on the album at 5:25. The song features a heavy breakdown that sounds like a cinematic buildup. Reverb in the song echoes at the end before operatic synths, reminiscent of Heat, follow. This calmly leads into the final track, “Naked Fuse.” The song wastes no time coming in and the chorus manages to sound both heavy and not at the same time. It features another slow buildup in the breakdown to lead into another heavy section before ending with guitar effects building up three times before cymbals cut it off with a heavy and abrupt riff.

Lyrically, the songs tend to have a sort of bleak, almost pessimistic tone to them, notably, on Fade Out, Antipatterns, and the title track. But the album isn’t totally littered with nihilistic and pessimistic lyrics. Songs like Scattered Sprites have lyrics that more so build up the subject than bring them down. Songs like these are the kinds of songs that you’d want to listen to while working out.

So, besides being intense, what does this album say and why is it different? Car Bomb excels at being metal and heavy while throwing in other chaotic sound elements both on top of the guitars and with the guitars. As stated above, there are sounds on here that I’m not entirely sure if they’re from a guitar or not. They manage to delightfully confuse listeners in a way that begs more listens to understand what the hell just happened. Now, is this as bizarre as something like Trout Mask Replica? No, there is a sense of organization here that would be much stronger than on something from Trout Mask Replica. But it is truly impressive how the band plays with slowing the tempo down in a way that is a miracle that none of the instruments sound out of sync. This not your basic 4/4 headbanging album. This is a musical tornado with a vendetta heading straight for you.