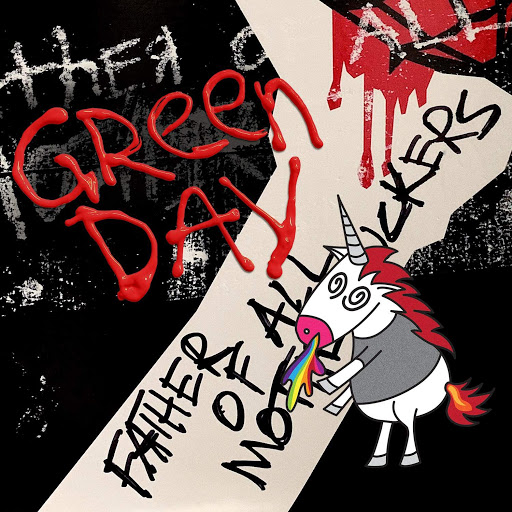 On Green Day’s new album, Father of All…, the band explores a unique, 50s punk-rock style to mixed results.

Father of All… is a strange animal. Clocking in at just over 25 minutes, the album is a strike of lightning, a flash in the pan, a snap of a finger. The LP doesn’t really start, it never gets going, and it never feels like it ends. While this sounds bad, after listening on repeat for a full weekend, it is the perfect length for today’s always moving, short attention span society, myself included.

The title track and lead single opens the record. I didn’t love the song when it first came out and I don’t love it now. Lead singer, Billie Joe Armstrong, employs a very uniquely grating effect on his voice during the verses and it is so aggravating that it comes close to ruining what would otherwise be a very solid rock song. Other songs that had potential, only to be soiled by the band’s weird effects and poor lyricism this time around include “Oh Yeah” and “I Was a Teenage Teenager.” While no songs on the record are actively bad, I cannot see myself listening to these songs outside of the context of the record. Even some of the really solid songs feature occasionally cheesy and cliche lyrics, but are entertaining enough to offset the negatives.

Outside of the three disappointments on Father of All…, the remaining seven tracks are unique in some of the best ways. On songs like “Meet Me on the Roof,” “Sugar Youth,” and “Take the Money and Crawl,” Green Day merges their trademark face-melting punk-rock style with a 1950s pop and rock and roll sound. While on paper this combination sounds strange, the band really merges the two genres extremely well. Furthermore, “Graffitia,” the album closer, takes the band’s signature sounds, but slows them down and makes enough tweaks to feel like a step in a new direction.

While Green Day does not revolutionize rock music with Father of All… like they have with previous releases, the band crafted an exciting and unique album that creates a brand new sound in punk music. It is no secret that Green Day has had a tumultuous decade, including four mediocre albums and Billie Joe Armstrong’s drug problems, but this record really shifts the narrative, as it makes it clear that Green Day is no longer chasing the dragon of American Idiot, but instead enjoying the ability to flex their creativity and truly crown themselves as the father of all modern punk music.

Ultimately, this is an album so short that anyone who enjoys rock music should check out. It’s entirely inoffensive, and you may even discover some songs that feature a sound you’ve never heard before. Standout tracks include the powerful “Sugar Youth,” the classic Green Day track, “Take the Money and Crawl,” and the bold and interesting “Graffitia.” You can catch the band live this summer with other pop-punk legends Fall Out Boy and Weezer on the Hella Mega Tour, hitting Boston’s Fenway Park on August 27th.