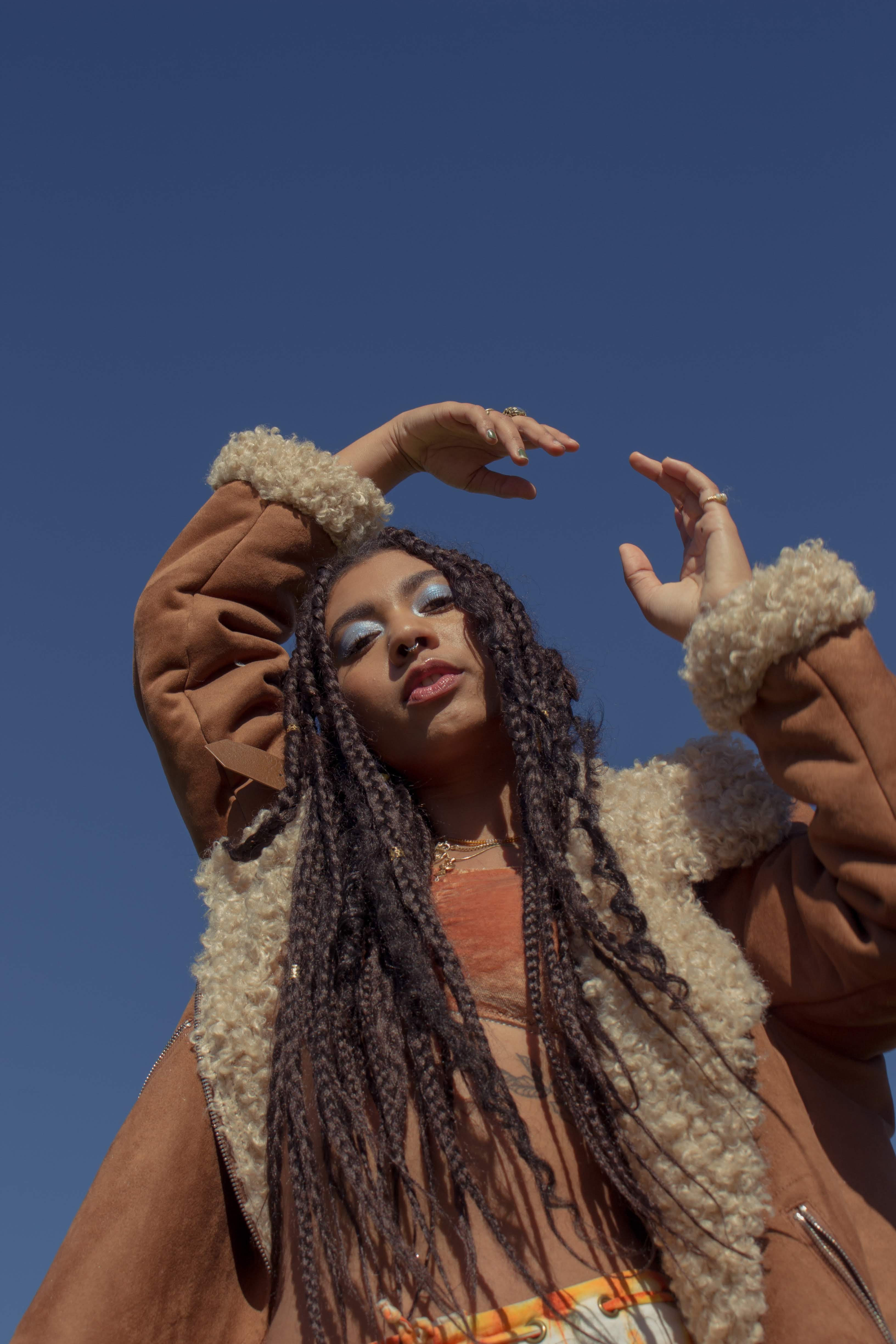 Satya is a singer and songwriter originally from Oakland, California currently living in New Orleans, Louisiana. At nineteen she has already released an EP, Flourish Against Fracture, which houses five songs. Taking a break from college Satya has concerts coming up on Valentines Day (camp themed) at The Willow in New Orleans and in mid-March in Los Angeles, California.

Harper: How did you get involved in music? How’d you start loving music and writing music and just like the beginning of “it”.

Satya: I grew up with like a single mom. She was a dancer so, just from a young age I was always around some kind of music or like some form of art. I think that’s where I was like, most inspired just like growing up with like family members who liked visual arts or music or dance and I kind of just grew around artistic people. So I think that’s how I was like, kind of inspired from a young age. And then when I was little I started to sing in little choirs and I did like a bunch of little band work things. I didn’t start writing my music until I was in high school. I’ve always loved to just write, I’ve always kept a journal. I always say, that was a form of just therapy for me, like I didn’t realize., it wasn’t like, oh, I’m just gonna write for this song or I’m gonna do this song. I just need to write a lot to, help myself kind of like form my, I don’t know, kind of like I’m bad at explaining this-

Harper: work through your own emotions?

Satya: Yeah, work through my own emotions. And then I just kind of realized that I could put that into my art. So in high school, that’s when I started writing my music. So I picked up guitar and I was kind of playing piano But yeah, I became more comfortable with guitar and writing on guitar in high school, and I’ve just been doing that ever since.

Harper: Yeah, so you like you probably get a lot of inspiration from just like living life. But is there a time when you find that you can like to write the most like, Is there a certain vibe or like space where you find yourself just like writing a lot of your music because your music has a similar flow and like, beat to it. So I was just curious if there was like a certain spot where like a lot of the songs from your new EP.

Satya: So I started writing. Like, I just released it like less than a month ago but I started writing all the songs in high school so it’s pretty old music to me. But yeah, those songs all came out of like a certain time in my life. I was, like, all the songs were written in the span of three, four months. I was definitely going through it as I went through like my first break-up. I was having like, some home problems, there’s like a lot going on. I honestly write the most when I am going through it to this day. I feel like that’s when I straighten out my emotions and my thoughts so that also is when a lot of my songs come out. That’s what I’m writing most. But I also think that my writing life has changed a lot of how I write my music has changed a lot. I wrote the EP And then for a while I’ve been focusing on the release of it and kind of like the visuals and how I want to release it to the world. And now I’m kind of trying to write, right now I’m working on another album. I’m kind of trying to go about how I’m gonna write this one because that the EP that also when I wrote it, it came very naturally. I don’t remember sitting down and being like, Okay, I’m going to write an EP. I met with a producer. I just had like a couple of songs written and I just knew I wanted to record them. I just didn’t know why. Then they all kind of form together. So I just like that EP came very like naturally and organically. But this next one, this is like the first time that I’m sitting down like already preparing that I want to write an album. So let’s see how I write the next one.

Harper: Did you produce your EP in Oakland or New Orleans?

Harper: Do you have a favorite song on your EP? Or is that too much to pick?

Satya: Oh, I feel like my favorite song is “not knowing”, I don’t know why. It is my favorite one to perform. I think it’s also that’s the only song on the EP with like a full band. And that was also just like really fun recording. Because like for the most part, it’s recorded like live. So yeah, I think that’s my favorite song. But all of them are all special to me.

Harper: I know I know there’s not one yet, but like if you could visualize a music video for any of the songs on the album, what do you think it would look like?

Harper: If you could describe the community that you think your music attracts, like, what would be like a few words that you would like, attached to them?

Satya: It is really interesting because I feel like I don’t have, like in my head a specific, community that listens to my music but I found interesting I had like Spotify Fridays, I can like see like, what kind of people like listening to like, Okay, how like, what genders listen to my music and I know that like I attract more of a female audience than male audience right now or at least with like the EP so I just I found that interesting. It’s interesting if my music for some reason speaks more to women, but yeah I don’t have a specific group of people. I think that like, with this EP, this music is like, they’re very deep. I feel like I was kind of going through it. Some of my lyrics are pretty, you know, intense and so I feel like it might  speak out to people who are like, are also going through specific things that can relate their problems to mine in some way.

Harper: Is there like an artist that inspires you or that you look up to?

Satya: Um, there are a million. But some of them I look up to- I look up to Lauryn hill, I listened to India Arie so much when I was little. As always, like Mazzy Star, Norah Jones, I look up to like a lot of musicians that like when you hear them as you know it’s them and they have their vibe and kind of their visuals and their vision. But yeah, I’ve always looked up to Prince, all of those people, I’m just kind of attracted to like random stuff.

Harper: When you aren’t writing songs or creating music or just kind of writing overall, what are you spending your time doing?

Satya: I spend a lot of time with friends, my people and I’m definitely like a people person. I also just love, like, definitely love traveling. That’s something like that’s hard being in New Orleans and being from California. I miss hills, hiking and nature.

Harper: Yeah. Yeah, I live like right outside of LA. So I live like where there are a lot of trees and mountains and like, I can see the stars at night and here I can’t.

Satya: Exactly, exactly. So that’s like something that like when I’m at home I spend a lot of time doing I just like miss mountains, and yes stars, and views. I am like with people a lot, I don’t even know what I do, and also I again I guess I just write a lot like putting together shows.