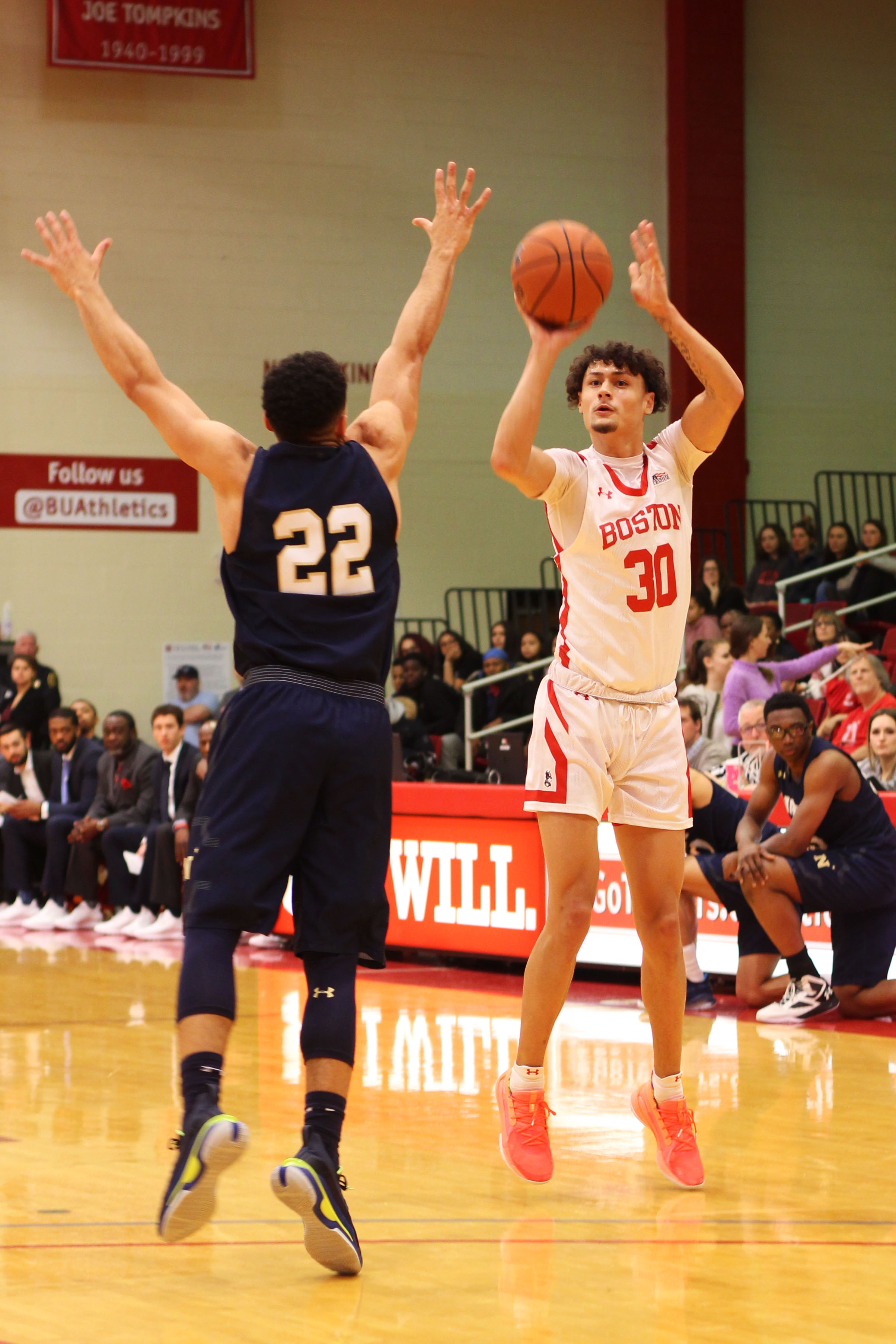 Only a few days after dropping a close contest at home, the Boston University men’s basketball team earned a decisive 79-64 victory over Holy Cross.

The Terriers bullied the Crusaders’ weak defense, making 50% of their field goal attempts and scoring at least 70 points for the sixth time this month. BU outscored Holy Cross 43-27 in the first half alone and never relinquished their lead. The Terriers improve to 11-10 on the year and 5-3 in conference play, while the Crusaders drop to 2-6 in conference and just 3-18 this season.

Senior center Max Mahoney had the freedom to go to work in the paint and was BU’s leading scorer with 18 points, six rebounds, and six assists.

In the backcourt, junior point guard Javante McCoy was the star of the show. Although he put only five of 16 shots through the hoop, he nearly matched Mahoney’s production with 14 points and six assists. He was also more aggressive when driving to the basket and went to the line twice after attempting only one free throw in his last five games.

Walter Whyte also proved to be a difficult matchup for Holy Cross. The sophomore guard posted his third double-double of the season, scoring 12 points and grabbing 10 boards.

Whyte helped BU stay dominant on the boards throughout the game. The Terriers had no problem cleaning the glass and ended with 44 rebounds to the Crusaders’ 29.

Bench production was another area where BU had a definitive advantage. Coach Joe Jones’ bench unit scored 25 points, while Holy Cross coach Brett Nelson’s reserves added only nine of their own.

Sophomore guard Fletcher Tynen was the catalyst for the Terriers’ bench with 12 points on 4-of-4 shooting. It was easily his highest scoring total of the season and the second-best of his career. The last time Tynen reached double digits in scoring was November 11, 2018 against Emerson College — a Division III team.

Also key was junior guard Andrew Petcash, who made two-three pointers off the bench.

The only Holy Cross players that BU struggled to contain were Joe Pridgen and Austin Butler. Pridgen, a blossoming freshman, scored 20 points to go with eight rebounds and three assists, while Butler went 5-for-8 from the field and scored 13.

Matt Faw, who was averaging 17.8 points in the Crusaders’ previous four games, scored only 12 points. Connor Niego and Ryan Wade combined to make three of 19 field goal attempts and were unable to give Holy Cross’ struggling offense a boost.

The Terriers will face another team lacking in depth and offensive firepower when they face Loyola Maryland on Wednesday. The Greyhounds have not won a game since they beat Holy Cross on January 2, and they were blown out by BU 85-53 on January 13. Tip-off is scheduled for 7:00 p.m. at Case Gym.