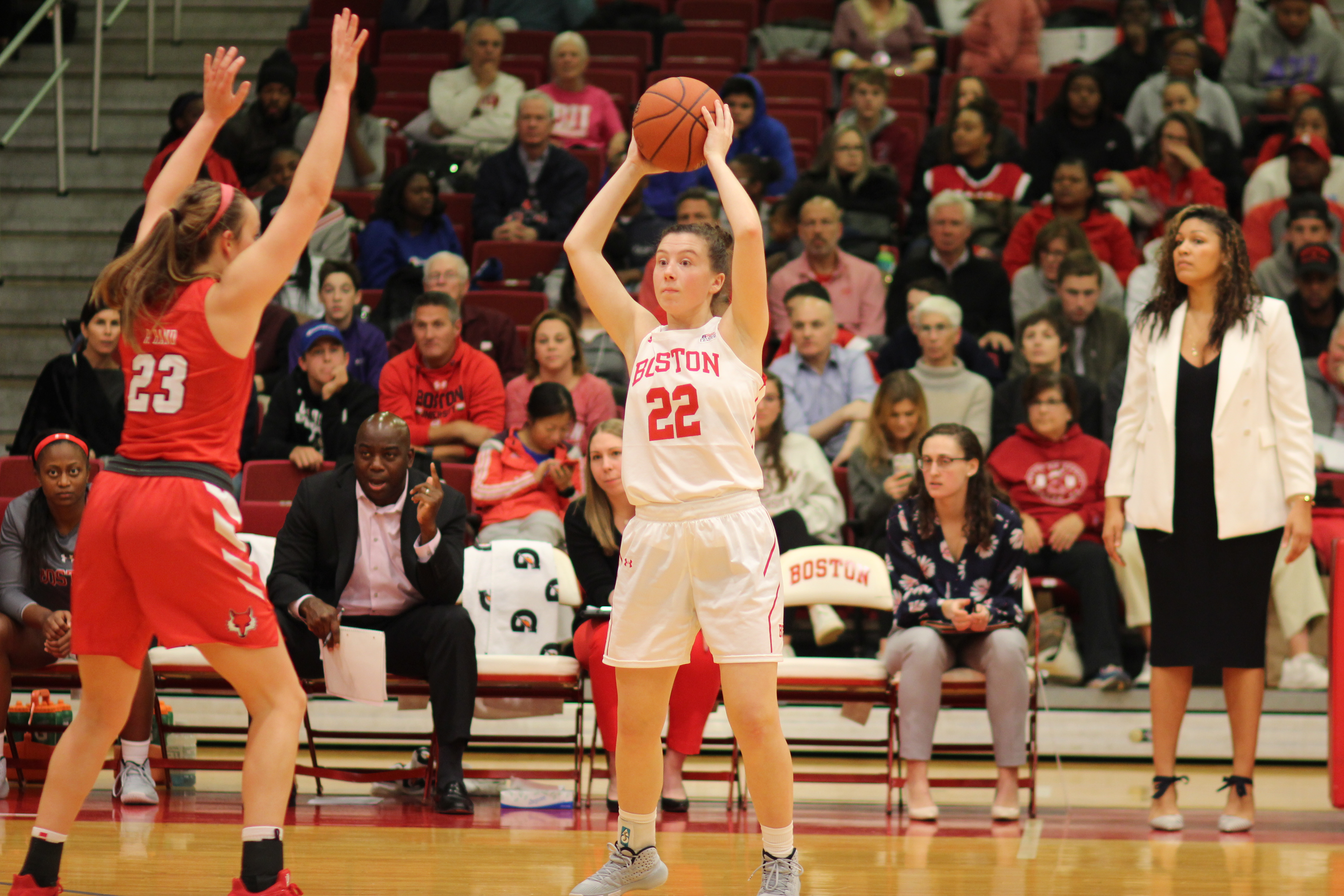 Despite outscoring Navy 18-10 in the third to take the lead, the Boston University women’s basketball team could not carry momentum into the final period, losing 46-41 to Navy after the Mids scored five points in the final six seconds. Navy found their first conference win of the season and sits at 1-6 in the Patriot League, while BU falls to 3-4 (8-10 overall).

Both teams had difficulty generating offensive rhythm starting from the opening tip. They combined to shoot only 17% from the field in the first quarter. Neither team shot particularly well in the fourth quarter either, but the Mids outscored the Terriers 15-9 to put the game away.

Perimeter scoring played a significant role in the outcome of the game. The Mids made 10 of 22 three-point attempts, but the Terriers were unable to do the same. BU made only three of 15 shots from beyond the arc, and all three came from junior point guard Katie Nelson. Nelson was BU’s leading scorer with 15 points, and she generated two assists and three rebounds.

Freshman guard Maggie Pina, the Terriers’ other typical three-point threat, went cold and missed all four of her three-point attempts. She finished with only one point, her lowest scoring total since November. Pina has had trouble consistently finding her stroke from deep—in seven conference games, she has made five three-pointers twice, but has also been scoreless from three in two contests.

Even backup point guard Sydney Johnson wasn’t immune to BU’s scoring struggles. After scoring 34 points off the bench in the last two games, she converted two of seven field goal attempts and one free throw for five points.

Freshman forward Maren Durant showed much more promise throughout the contest. She grabbed 14 rebounds, surpassing her previous career best of 12 set during the Terriers’ last game. Durant also made three of five shots. She has not been asked to take many shots this season, but she has developed into an efficient interior scorer in addition to being a rebounder and defender.

Although they had an advantage on the glass, the Terriers’ frontcourt was outplayed by Navy forward Lindsey Llewellyn. Llewellyn ended with seven rebounds and 14 points, including four three-pointers.

Finding a way to limit stretch fours like Llewellyn is essential for coach Marisa Moseley and the rest of the Terriers before BU’s next matchup against Holy Cross. Crusaders forward Lauren Manis has been one of the best players in the Patriot League on the boards and on the perimeter all season. Manis has caught fire in her last two games with a combined 51 points, 26 rebounds, and 7-of-11 shooting from deep.

The Terriers face Holy Cross at home on Saturday at 4:00 p.m.