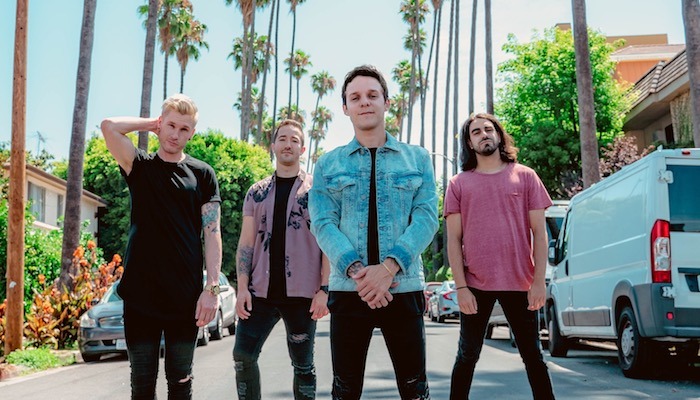 On Saturday night (12/14) at Alchemy in Providence, returning pop-punk band MAKEOUT played their second show with the band’s new lineup, boasting brand new lead singer Kyle Dee and bassist AJ Khah (previously of Sleep On It). Returning members included guitarist Tyler Young and drummer Scott Eckel, who have been with the band since its name change and signing. The band was preceded on-stage by four openers–Keep Flying, Junro, Hello Atlantic, and A Crash Republic–all local bands with small followings in Rhode Island and Mass.

MAKEOUT was founded in 2012, originally under the name Trophy Wives. The band began to gain momentum after winning a battle of the bands competition in 2014, for which the grand prize included an opportunity to play a date of Warped Tour. The band signed to Rise Records in 2017, changing their name from Trophy Wives to MAKEOUT and solidifying a tour lineup that included Young and Eckel, as well as lead singer Sam Boxold. Under this name and lineup, the group released their debut LP, titled The Good Life.

In January of 2019, after a stint on the 2018 Warped Tour, opening gigs for Blink-182, and a national tour, lead singer Sam Boxold announced his decision to leave the band for personal reasons. Remaining members Young and Eckel opened up auditions for lead singer to the public, culminating in a competition in which fans voted for their favorite of 10 different singers to replace Boxold. Singer Kyle Dee apparently won the competition, and joined the band in June, with bassist Khah following soon after.

This show in Providence follows the new lineup’s debut show in Chicago, hometown of both Dee and Khah, and was MAKEOUT’s final show of 2019. These two shows, according to the band’s Instagram, served mainly to introduce MAKEOUT’s new lineup to their fans, and add to Dee and Khah’s experience playing with the band in front of live audiences. Dee teased a few new songs to be released by the band early next year, but on Saturday night the setlist closely mirrored the track list of the band’s only album.

The crowd was small, but Dee’s nerves were noticeable at the top of the set; as both a fan and a critic, it was painful to watch him fumble extensively with his earpiece as the rest of the band played the opening bars of “Childish,” their fast-paced, guitar-heavy album opener. Thankfully, he seemed to settle in after the equipment malfunction, throwing himself into the band’s next song, the technically difficult “Lisa.” As a fan of the band before Boxold’s parting, I was surprised to hear how closely Dee’s vocals mirrored that of Boxold’s– he absolutely nailed the strained, high-pitched energy and breathy melodies that the ex-lead singer brought to his songs.

Having seen this band perform with their previous singer, I was interested to see how a new approach to lead vocals would affect the band’s stage presence, and was pleasantly surprised to find that the fun atmosphere of MAKEOUT’s 2018 shows had persevered through the lineup change. Dee’s consistency with the band’s old sound, however, was paired with a more mature and technically advanced undertone to the singer’s performance. The band closed with lead single and crowd pleaser “Crazy,” which Dee struggled to perform on pitch. But really, who can blame the guy? It’s sung in an incredibly weird key that even Boxold couldn’t get quite right the majority of the time.

Moving forward, I think a more mature sound could help MAKEOUT remedy the disconnect between Boxold’s spiteful, immature lyrics and Dee’s unapologetically happy stage presence, which was frankly refreshing to see at a pop-punk show. Overall, I think the band has done well to appease the current fans with a singer that vocally resembles Boxold, while also ensuring that they haven’t handcuffed themselves to the same, unrefined sound that their previous singer induced on The Good Life.

Personally, I’ll be interested to see if the band can continue to grow their fanbase without the boyish charm of singer Boxold, and the angry, jumpy intensity that he was able to inspire in a crowd. As a fan who voted for Kyle Dee, however, I’m hopeful that this new MAKEOUT will be able to move on from their past and refine their sound into something that I can support both when I’m feeling petty (The Good Life), or when I want to listen to some genuinely decent crappy pop-punk.