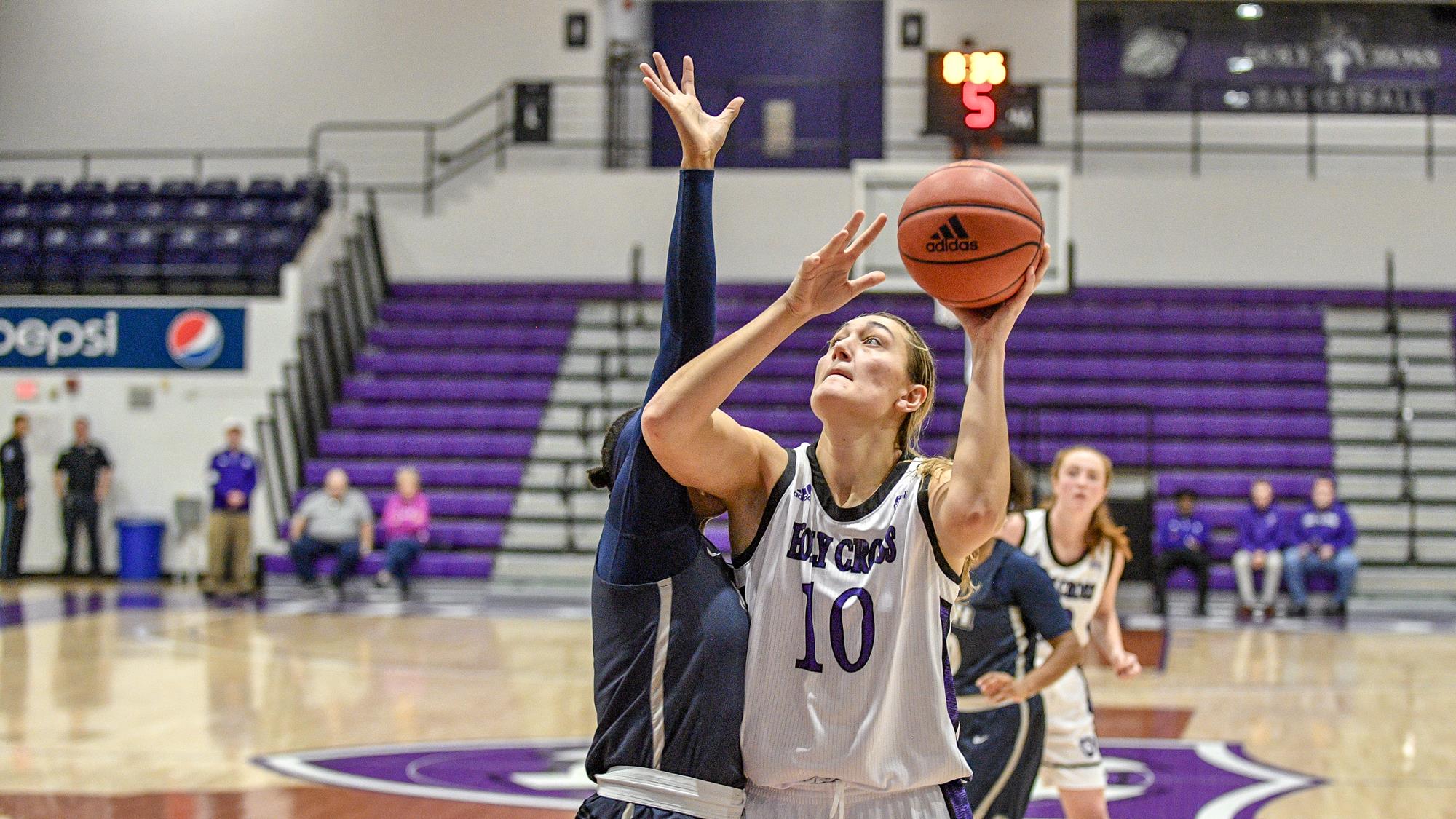 This week’s edition of the Patriot League power rankings sees Holy Cross swipe the top spot from Colgate University. The Raiders unexpectedly dropped their Patriot League opener against American, despite being ranked number one heading into conference play. While the other top four teams were more predictable, there was movement in the bottom of the standings. Navy dropped five spots after a disappointing first week, meaning many teams found a chance to inch up.

With her rebound at 6:38 of the fourth quarter vs. Navy, @TheManisLauren becomes just the third player in program history to record 1,000 career rebounds!#GoCrossGo pic.twitter.com/UGgTntR8cU

Holy Cross played a different brand of basketball last week, relying on their defense instead of their offense to secure wins against Loyola MD and Navy. They held the Greyhounds and the Midshipmen to 56 and 49 points, respectively. Their offense suffered more than expected, with star forward Lauren Manis scoring 13 points against Loyola and only nine points against Navy. She was still effective on the glass, grabbing double-digit rebounds in both games, but she’ll need to hit more shots to give the Crusaders a chance against competitive Lafayette and Bucknell teams. — Hannah Yoshinaga

This week: January 8 vs. Lafayette, January 11 vs. Bucknell

Bucknell faced Army and Lafayette last week, handily defeating both by double digits. Ellie Mack continues to be the rock for the Bison; the senior put up 13 points and 8 rebounds against Army and followed it up with 19 points and eight more boards versus the Leopards. More impressive was Bucknell’s defense. The Bison held Army to only 52 points, and the Leopards struggled even more — to the tune of just 36 points. Saturday’s showdown with Holy Cross could quite possibly decide the top spot. — Ethan Fuller

This week: January 8 at Navy, January 11 at Holy Cross

The Mountain Hawks put up an outstanding performance on defense against Navy on Thursday, beating them 70-40 and allowing their starters to play fewer minutes than they usually would. That paid off against Loyola Maryland, as they couldn’t secure the 55-53 win until Cameryn Benz made a game-winning layup with only 1.5 seconds remaining. This season has been a tale of two vastly different offenses for Lehigh, one high-scoring and one much less so, and both were on display this week. Moving forward, the Mountain Hawks’ offensive attack needs to resemble the one they put up on Thursday. — Hannah Yoshinaga

This week: January 8 vs. BU, January 11 at American

Any loss would have doomed the Raiders, and it came in their opening contest — a 63-61 nailbiter at American. This is by no means a bad loss, and the Raiders recovered well with a monster 100-point showing against Army. One of the Patriot League’s best offensive performances all season saw the team shoot a blistering 63 percent from the floor. Abby Schubiger led the way with 20 points on 10-11 shooting, but five Raiders scored in double figures and every active player managed at least four points. Colgate drops three spots, but they are still in the hunt as a conference contender. — Ethan Fuller

This week: January 8 at Loyola MD, January 11 vs. Navy

For the third time this season, Maggie has been named the @PatriotLeague Rookie of the Week! pic.twitter.com/hjKXiG6dY9

The Terriers inch up a spot behind a largely successful week. Their loss at Lafayette came down to a Nicole Johnson buzzer-beater, and they responded by trouncing American at home. BU’s offense is sputtering right now; the team shot just 31 percent from the floor against the Leopards and 36 percent against the Eagles. But their defense has clamped up, holding both opponents to under 60 points last week. Katie Nelson should rebound from her shooting slump, and with the growth of Patriot League Rookie of the Week Maggie Pina, things are looking up for BU. — Ethan Fuller

This week: January 8 at Lehigh, January 12 at Army

American’s offense was prolific against a good Colgate defense and it allowed them to earn a surprising win to begin conference play. But it all fell apart against BU on Sunday—the Eagles scored only fourteen points in the first half against a Terrier defense that has struggled in several games this season. American needs to get consistent production on both ends from someone other than junior guard Indeya Sanders if they want to finish with a respectable standing in the Patriot League. — Hannah Yoshinaga

Lafayette did beat Boston University, but their 1-1 week only showed that this team’s success hinges on Natalie Kucowski. The junior put up a ridiculous 23 points and 23 rebounds to help take down BU. But against Bucknell, Kucowski went cold and no other Leopard stepped up, as the team shot a dismal 29 percent from the field en route to only 36 points. No player outside of Kucowski has surpassed ten points in conference play. Without any other scoring options, Lafayette can’t do much offensively — even when their star is on her game. — Ethan Fuller

This week: January 8 at Holy Cross, January 11 vs. Loyola MD

Congrats to Stephanie Karcz, who was one of 15 players across Division I chosen to the @herhoopstats Mid-Major Player of the Year Watch List!https://t.co/ZjLrlfi0wx

The Greyhounds were respectable on defense last week and they lost by fewer than 10 points in their matchups against Holy Cross and Lehigh. However, their poor shooting was killer — they shot under 40 percent from the field in both games. Against Holy Cross, two starters failed to score even one point. That didn’t happen in the game against Lehigh, but four starters were still held to six or fewer points. Defense won’t be enough against talented Colgate and Lafayette teams and they have to find more ways to score. — Hannah Yoshinaga

This week: January 8 vs. Colgate, January 11 at Lafayette

Despite shooting 59 percent from the field in the second half, the Black Knights fall to Colgate in Hamilton. pic.twitter.com/7qb45VQ2WN

Army shot well from three in both of their games last week, making a combined 23 of 38 three-point attempts. Not much else went right for the Black Knights, and they couldn’t pull out a win against Colgate on Sunday despite scoring nearly twice the amount of points they scored on Thursday. Army has fallen asleep on defense all season, and they did the same against Colgate. The 100 points they allowed in that game are they most the Black Knights have given up since March 19, 2006 against Tennessee. — Hannah Yoshinaga

This week: January 8 at American, January 12 vs. BU

Navy takes a serious tumble in this week’s rankings after two rough offensive showings, albeit against strong teams in Lehigh and Holy Cross. The Mids have now lost five in a row, and their offensive is nearly nonexistent; they scored 40 and 49 points in their two games and have not scored 60 once during the skid. Only six players scored in the 70-40 blowout loss to Lehigh, and none reached double figures. Navy has a good defense, but the inability to get buckets will sink the ship if it keeps up.

This week: January 8 vs. Bucknell, January 11 at Colgate