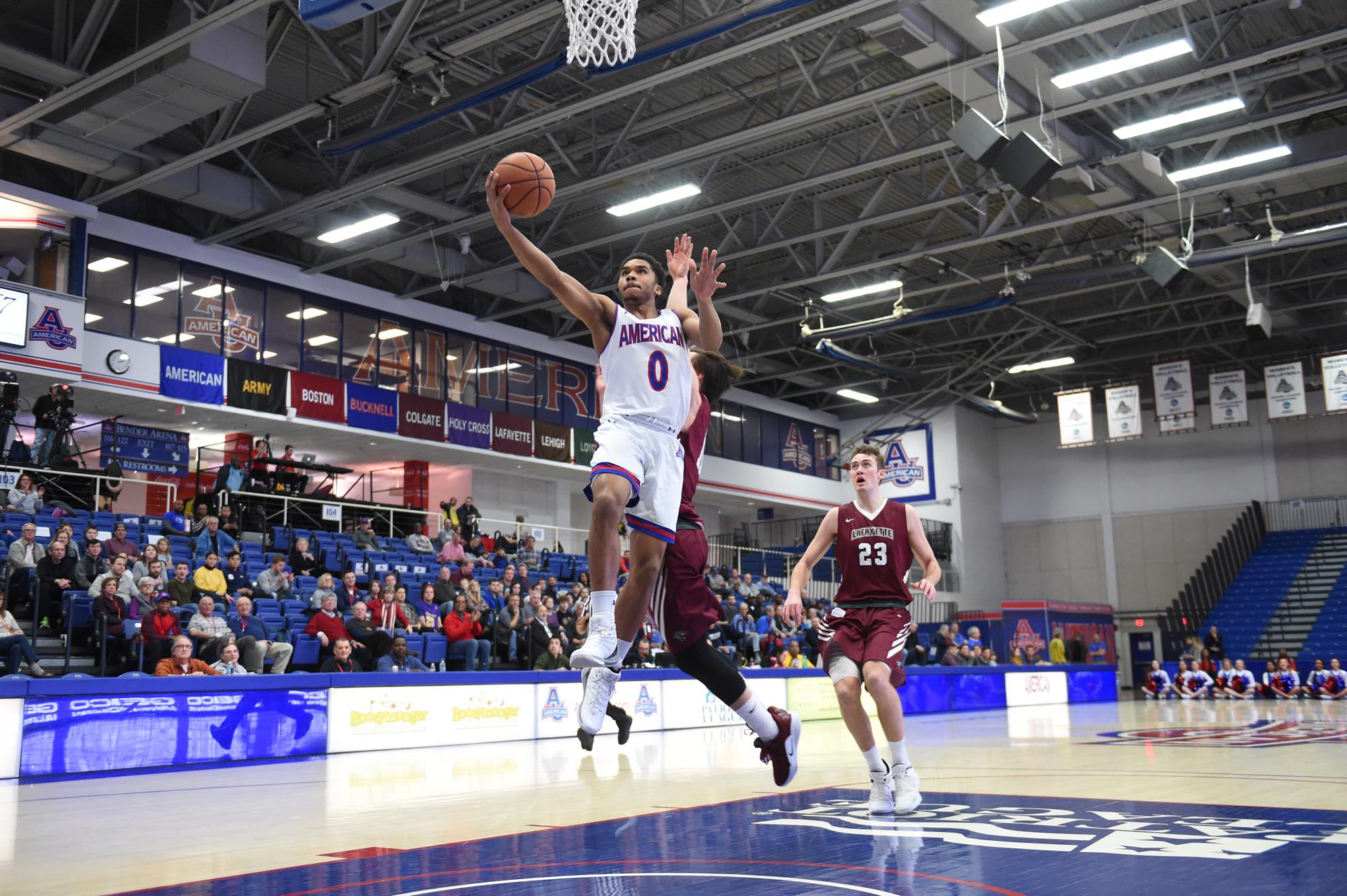 This week was full of surprises for men’s basketball in Patriot League play. The top spot was just about the only position that seemed solid by the end of the week, with almost every other team moving either up or down in the rankings. Lafayette and Loyola Maryland’s lackluster play this week made it questionable whether or not they have truly improved since last year, while Bucknell is turning their season around after a surprising 2-0 start.

Colgate is the steadying presence from last week’s rankings. The Raiders swept their first week, handily beating American before using a strong second half to take down Army. Their defense has looked strong so far; Sa’eed Nelson and American scored just 51 points against the Raiders, while Army put up a more respectable 65 points. Meanwhile, sophomore guard Nelly Cummings went off for 24 points in his breakout game against the Black Knights. His ability to get hot from deep makes Colgate even more intimidating on offense. — Ethan Fuller

This week: January 8 vs. Loyola MD, January 11 at Navy

The Eagles broke their four-game losing streak by eking out a close win over BU on Sunday. They were foul-happy early in the game, but they managed to limit the Terriers’ scoring just enough down the stretch. Their bench production was underwhelming in both games this week, but it didn’t matter because Sa’eed Nelson, Jacob Boonyasith, and Jamir Harris carried the offense. Nelson was the Patriot League Preseason Player of the Year and he should have no problem asserting himself on both ends of the court against subpar opponents in Army and Lehigh. — Hannah Yoshinaga

This week: January 8 at Army, January 11 at Lehigh

Two tight contests and general Patriot League chaos help the Terriers jump up two spots in the rankings. BU pulled off an impressive comeback to score a clutch victory over Lafayette, but followed it up with a narrow loss against American on Sunday. The Terriers are tough to pin down because of their wild inconsistency shooting the long ball. Against Lafayette, they made nearly 43 percent of their triples, but that rate plummeted to 15 percent against American. It’s hard to imagine Jonas Harper, Andrew Petcash, Walter Whyte and the other Terrier deep threats putting up another massive dud, so we’re betting on improvement here. — Ethan Fuller

We're back at Christl Arena on Wednesday night against American. #GoArmy pic.twitter.com/CrF4ffbTJG

Army’s 0-2 start in conference play is hardly indicative of how they played in matchups against Bucknell and Colgate, which they lost by only seven points combined. Lonnie Grayson, Thomas Funk, and Matthew Wilson helped propel them in those games, accounting for well over half of Army’s total offense in each. But all three did not play their best basketball at the same time—Wilson had an off night against Bucknell, and Grayson was held to 2-of-11 shooting by Colgate. It’s worth wondering if they could have turned those close losses into solid wins had they all gotten into a rhythm at once. Bench production is another concern going forward, with Army’s bench scoring only 11 points all week. — Hannah Yoshinaga

This week: January 8 vs. American, January 11 at BU

Senior guard Andrew Kostecka wasn’t human this week, almost single-handedly willing his team to a win over Holy Cross with 37 points on 15-of-21 shooting. He also scored a team-high 15 points in Loyola’s loss to Lehigh on Sunday. The rest of the Greyhounds haven’t been able to match his production, and Loyola nearly lost to a 1-13 Holy Cross team before dropping their road matchup against unimpressive Lehigh. Defense was a strength for the Greyhounds in their non-conference slate, but their offense is not productive enough to withstand the poor defensive performances they put up this week. — Hannah Yoshinaga

This week: January 8 at Colgate, January 11 vs. Lafayette

Frankly, the Leopards disappointed this week. They blew a double-digit lead against Boston University and collapsed against Bucknell. Lafayette held a 43-30 lead in the second half against the Bison, then fell victim to a 28-6 run that completely flipped the game. Justin Jaworski and E.J. Stephens are providing most of the offense for the Leopards, with the two eclipsing double figures in both games. But the lack of other consistent options, along with some stunning defensive breakdowns, killed promising first halves. — Ethan Fuller

This week: January 8 vs. Holy Cross, January 11 at Loyola MD

Yes, Navy went 1-1 this week. But a loss to a 2-13 Holy Cross team is a jarring red flag, and the Midshipmen’s win over Lehigh was nowhere near convincing. Navy’s offense continues to flounder, and while their defense held their two opponents to 60.5 points per game over the two contests, that can only help so much when the offense plays at a slow pace. The Midshipmen, despite generating plenty of turnovers, scored just eight combined fast break points during the week. They need to generate some easier scores in transition. — Ethan Fuller

This week: January 8 at Bucknell, January 11 vs. Colgate

This week's Bison Athlete of the Week is Avi Toomer of @Bucknell_MBB! Avi went 7-for-9 from the 3-point arc last week and helped lead the Bison to a 2-0 start in Patriot League play. #rayBucknell pic.twitter.com/csj4HYjAa4

The Bison are not out of the Patriot League basement yet, as their two wins came against a bizarre Lafayette squad and a middling Army team. But this is a step in the right direction after an underwhelming non-conference slate. Bucknell opponents scored 65 and 66 points — nothing impressive, but solid numbers for a team that previously had no defensive presence. Avi Toomer’s 7-of-9 three-point performace is leading the charge for a Bison team that might have some untapped offensive potential. Jimmy Sotos is also returning to freshman form from long range. He went 5-10 on threes this week, bringing his clip up to 39 percent on the season. –Ethan Fuller

Lehigh put forth a balanced offense in both games this week, with three players scoring in double digits against Navy and four players doing the same against Lehigh. In spite of that, Thursday’s loss proved that the Mountain Hawks’ offense relies too much on Jordan Cohen and James Karnik. They scored only 11 combined points, and Lehigh’s 58 points on the night were their second-lowest toal of the season. Taking Cohen and Karnik out of the game will give any team in the conference a chance to top Lehigh. — Hannah Yoshinaga

This week: January 8 at BU, January 11 vs. American

ICYMI, here is a look at how we took down Navy this afternoon! #GoCrossGo pic.twitter.com/vUFkhW92fM

Despite playing about as badly as possible for the first few weeks of the season, Holy Cross didn’t play like a 2-13 team this week. They nearly beat Loyola MD on the road and were able to win at home against Navy. Freshman forward Joe Pridgen played hero against Loyola, scoring 26 points. When Pridgen struggled in the Navy game, junior guard Austin Butler and freshman guard Drew Lowder picked up the slack. Butler scored a season-best 18 points on 7-of-14 shooting and Lowder hit the game-winning three with only six seconds remaining. — Hannah Yoshinaga

This week: January 8 at Lafayette, January 11 at Bucknell