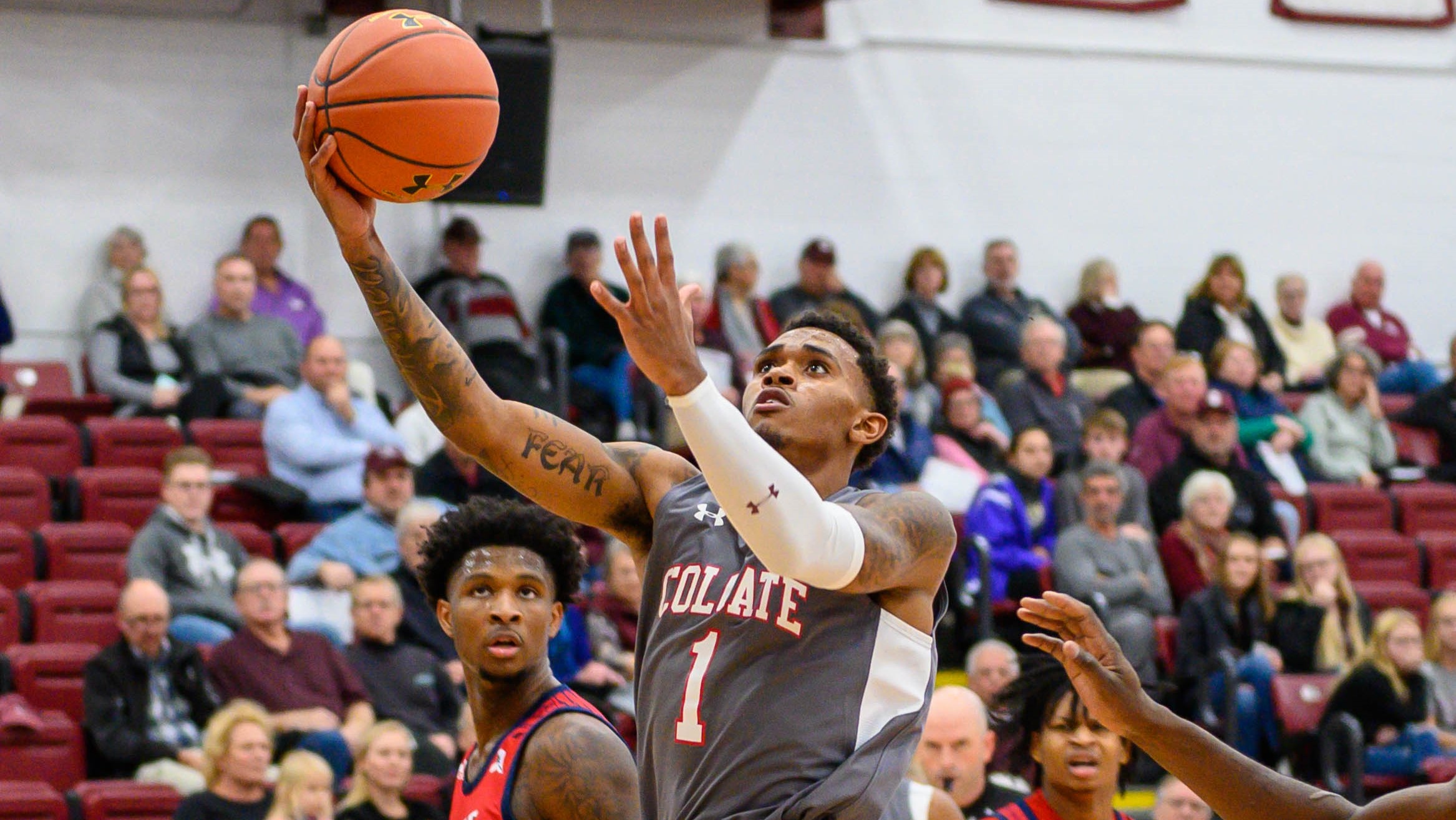 As non-conference slates wind down across the country, the focus for every college basketball team will start to shift towards 2020 and conference play. In the Patriot League, where winning the conference is essentially the sole path to March Madness, all ten teams will be scrambling to establish themselves as early contenders.

Boston University men’s basketball is off to a middling start with a 5-7 record through Christmas day. The Terriers figure to be right in the thick of the playoff seeding race. Meanwhile, the rest of the Patriot League has experienced vastly different levels of non-conference success. Here’s what we’ve learned so far about each of BU’s conference opponents.

Here's the final seconds of what happened in the Colgate-UC finish.

Colgate’s conference-best record stems from their solid offense. The Raiders average 73.8 points per game, although they are sometimes inconsistent from beyond the arc. Their offense mainly runs through Burns, who leads the team with 15.1 points per game and 3.3 assists per game. They also have two frontcourt scoring weapons in Ivanauskas and Rayman.

The team’s defense isn’t quite on par with their offense, and while they can guard on the perimenter, their paint defense is often lacking. But despite their struggles, the Raiders got stops en route to a 67-66 victory over perennial tournament contender Cincinnati on December 14. It was easily their most impressive win of the season, especially considering that Cincinnati had been held under 70 points only three times beforehand.

The Raiders’ aptitude at the line could spell trouble for the Terriers, who have committed 188 fouls in 12 games this season. Max Mahoney and Walter Whyte each lead the team with 2.3 fouls per game, so they’ll need to be cautious on the defensive end of the floor.

Lafayette leads the Patriot League in scoring with 77.8 points per game. That’s due in large part to Jaworski, who averages 20.1 points per game. Cherry has also developed into a strong secondary scoring option—in nine games, he’s scored almost as many points as he did in 20 games last season. In terms of playmaking, Jarrett and Cherry are the team’s main ball handlers and they lead the team in assists.

The Leopards can put up a respectable performance on defense, and they guard the long ball well. They also don’t commit many fouls. The Terriers’ best bet to score against them will be to work the ball inside since Lafayette lacks stellar interior defenders.

Almost every player on the team is a threat from three. Jaworski is the team’s best three-point shooter, canning a whopping 47.3 percent of his triples on 6.1 attempts per game. Even Cherry, the team’s primary big man, has made six three-pointers on the season. The Terriers can guard the perimeter, but they will have to be ready for the possibility of a three-point shot on every possession.

3:22, 2H | @LoyolaHounds 65, Elizabethtown 38. Markese Redding picks up the steal and throws a dime to Jones for a left-handed layup.

As a whole, the Greyhounds aren’t great three-point shooters, but they are efficient scorers inside the arc. They shoot 54.2% on their two-point shots. Kostecka and Spencer are the team’s most reliable scorers. Kostecka averages 21.2 points per game, while Spencer overcame some early struggles on offense and now boasts a 42.9 percent three-point clip. Spencer also leads the team in assists.

Loyola is a stronger team on defense than on offense, holding opponents to 68.7 points per game. Kostecka is the team’s best and most active defender. Despite being a bit undersized, he can block shots and is a threat to steal the ball at any time.

Key Stat: 82 steals on the season

The Greyhounds average 7.5 steals per game while turning the ball over less than the Terriers do. The Terriers have to be careful with the ball to prevent steals and limit Loyola’s ability to score in transition. Walter Whyte leads the team in giveaways with 2.3 per game, but he committed only one turnover in four games this season. He will need to put up similar marks against Loyola.

The centerpiece of Navy’s game is their defense. Their opponents are scoring a mere 57.7 points per game, which is the 12th-lowest mark allowed by any team in Division I basketball. Their defense is a team effort—every player who has played at least two games has a defensive rating under 100.

The Midshipmen aren’t quite as good on the other end of the court, as they’re only scoring 61.8 points per game. Davis is the team’s leading scorer with 14.3 points per game, though Carter isn’t far behind with 14.0. Summers is an effective offensive rebounder, and those second chances are crucial for Navy’s struggling shooters.

Outside of Summers and Carter, there aren’t any other consistent defensive rebounders on the team. On the other hand, the Terriers grab 10.1 offensive rebounds per game. BU should be able to beat Navy on the offensive glass, which gives them an additional edge over the Midshipmen’s tough defense.

If you're open, Tommy will find you. 👀#GoArmy pic.twitter.com/EhutPLHPMq

Army brings a balanced offensive attack to the table. Funk is the chief playmaker, although there are several capable passers on the team. Funk and Grayson can both score from a variety of spots, while Wilson is powerful in the post.

The Black Knights have more difficulty executing on defense. They aren’t great at guarding inside or outside the arc and they aren’t a threat to steal the ball or block shots. But what they lack in those categories they make up for in preventing easy points off of personal fouls. They have only committed 173 fouls so far this season.

The Black Knights’ greatest strength on offense is their scoring inside. Wilson leads the charge with a 64.1 percent two-point rate on 9.4 attempts per game. The Terriers have struggled to guard more in the paint than on the perimeter, so they’ll need to step it up in that regard. Army players are shooting a dismal 55.3 percent on their free throws, so BU shouldn’t be afraid to foul inside if need be.

HIGHLIGHT | Sa'eed Nelson says anything you can do, I can do better… draining a three to tie the ballgame after Stony Brook took its first lead since early in the first half. Going down to the wire in Bender! pic.twitter.com/bQPiVo9q3J

American’s greatest strength is their offense, which is centered around efficient three-point scoring and smart shot selection. Their leading man on offense is Nelson, who averages 16.4 points per game but is turnover-prone. Boonyasith and Harris bring the firepower from downtown, where they’re a combined 48-for-111 (43.2 percent).

Defense is more of a liability for the Eagles, but Nelson is an active defender who overcomes his small stature and steals the ball if his man gets careless. Sophomore guard Stacy Beckton is a vertical threat, averaging 1.2 blocks per game.

The Terriers are much better rebounders than the Eagles, so they are more than capable of winning the battle of the boards. Max Mahoney, Walter Whyte, and Sukhmail Mathon should be the biggest beneficiaries since they have been BU’s top rebounders so far this season.

Did you know that Bucknell is one of 14 D-I teams with 5 players with double-figure scoring averages?

The Bison have been inconsistent on offense, although they’ve showed more consistency from three and on their free throws. Most of their offense runs through the backcourt of Sotos and Toomer, the team’s leading scorers and primary ball handlers. They’re also Bucknell’s biggest threats from three-point land.

However, anything good that the Bison do on offense is immediately undone by their atrocious defense. They cannot guard the perimeter or paint and they commit too many unnecessary fouls. Three of their players, including Toomer, are averaging more than three fouls per game.

To put it in perspective, that mark ranks 342nd out of the 350 teams in Division 1 basketball. The Terriers’s field goal percentage is better than average anyways, so they shouldn’t have a problem scoring against Bucknell.

Jordan Cohen is the star of Lehigh’s offense. His best offensive performance so far this year came when he scored a season-high 26 points against a physical St. Mary’s team on November 23. While his ceiling as a shooter is high, he struggles with inconsistency. Most of the offense runs through him, and he averages four assists per game. The Mountain Hawks’ other top scorer is Karnik, who’s shooting over 60 percent from the field.

Lehigh puts up a solid effort on defense, with Karnik averaging one block per game. Cohen is the biggest threat to steal the ball, and he’s racked up 15 steals on the season.

The Mountain Hawks can guard the perimeter and prevent their opponents from putting up easy threes. Their three-point defense will likely have the greatest impact on Jonas Harper and Andrew Petcash. They’re the Terriers’ best three-point shooters and both attempt more three-pointers than two-pointers per game.

Not much has gone right for Holy Cross this season. Maryland-Eastern Shore (1-13), Delaware State (1-12), and Houston Baptist (0-10) are the only teams in Division I basketball with a worse record. Their struggles begin on offense, where they only average 67.5 points per game. Their leading scorers are Pridgen and Lowder, who are both freshmen. Pridgen and Lowder’s inexperience is a problem and they are both turnover-prone.

The Crusaders’ defense is somehow even more off-putting than their offense. They’ve yet to limit an opponent to fewer than 68 points, and they gave up 101 points to Northeastern on November 19. The Huskies’ Jordan Roland had a field day against Holy Cross in that game, dropping 28 points in only 27 minutes.

The graduation of Jehyve Floyd, 2018-19 Patriot League Defensive Player of the Year, has killed Holy Cross. The Crusaders don’t have any real interior threats on defense this season. Their size isn’t the problem, as nine of their 15 players are 6’5” or taller, but they aren’t able to take advantage of their verticality to get stops. Max Mahoney should benefit the most from this defensive lapse, as he scores at a bruising 59.2 percent clip in the paint.