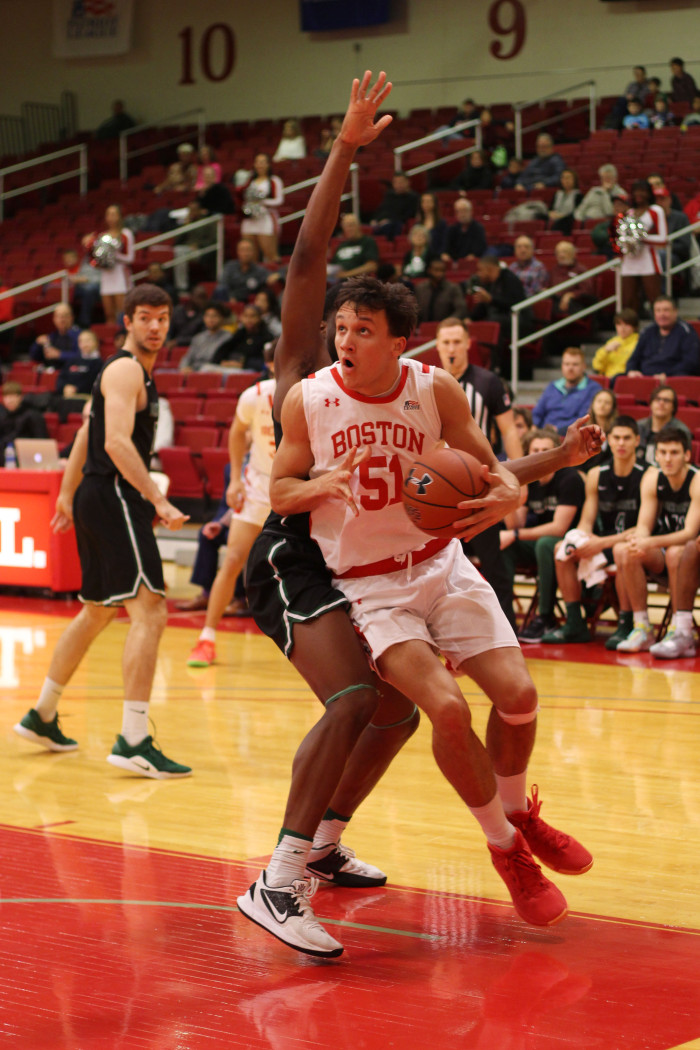 BOSTON, MA — In their penultimate contest of the 2019 calendar year, Boston University men’s basketball used a strong second half and improved half-court defense to take home a decisive 74-62 win over UMass Lowell. The Terriers’ second straight win moves the school to 5-7 on the year, while the River Hawks drop under .500 at 6-7.

Max Mahoney led the way for the Terriers with an efficient 23 points in just 24 minutes. The senior forward made 9 of his 12 attempts on the afternoon by bullying opposing bigs down low, and also made five of six free throws — important for a player who entered Saturday shooting just 56.8 percent from the line.

Next to Mahoney in the frontcourt was junior Suk Mathon, who earned his first start of the season in today’s contest. Mathon rewarded head coach Joe Jones by grabbing a career-high 13 boards. Though he scored only four points, Mathon’s strength down low provided a great counterattack to the physical frontcourt of UMass Lowell.

Sophomore Alex Vilarino may have been moved to the bench, but he still played well for the Terriers, scoring nine points in 12 minutes. Vilarino displayed a better attacking mentality, using his burst and strength to finish through some tough contact in the paint.

BU burst out to an early 10-1 lead before the River Hawks eventually countered with an 8-0 run of their own. But the Terriers responded again, pushing the score to 28-19 and never looked back. By midway through the fourth quarter the lead had ballooned to a 66-46 advantage.

BU led for all but 57 seconds in the victory, and while they were not absolutely consistent, growing a steady lead like they did is a positive sign after losing close games during their skid and falling into one against Dartmouth last week.

For UMass Lowell, shots just could not fall. The River Hawks made 5 of 21 three-pointers and only 31 percent of their looks in the contest. Christian Lutete and Ron Mitchell both put up double-doubles, but neither player shot with efficiency. UMass Lowell played just eight River Hawks on Saturday, and that lack of depth hurt them later in the afternoon.

The Terriers have now strung together two victories and hope to close out their non-conference slate with a third against a new Division I opponent in Merrimack College. The Warriors have started strong at the new level, beating solid opponents in Northwestern, Army and also UMass Lowell.

Merrimack also was the victor in one of the most lopsided scores in college basketball history: a 110-16 slaughter against Lesley. BU looks to avoid anything of the sort when they face the Warriors next Sunday at 6:00 p.m.