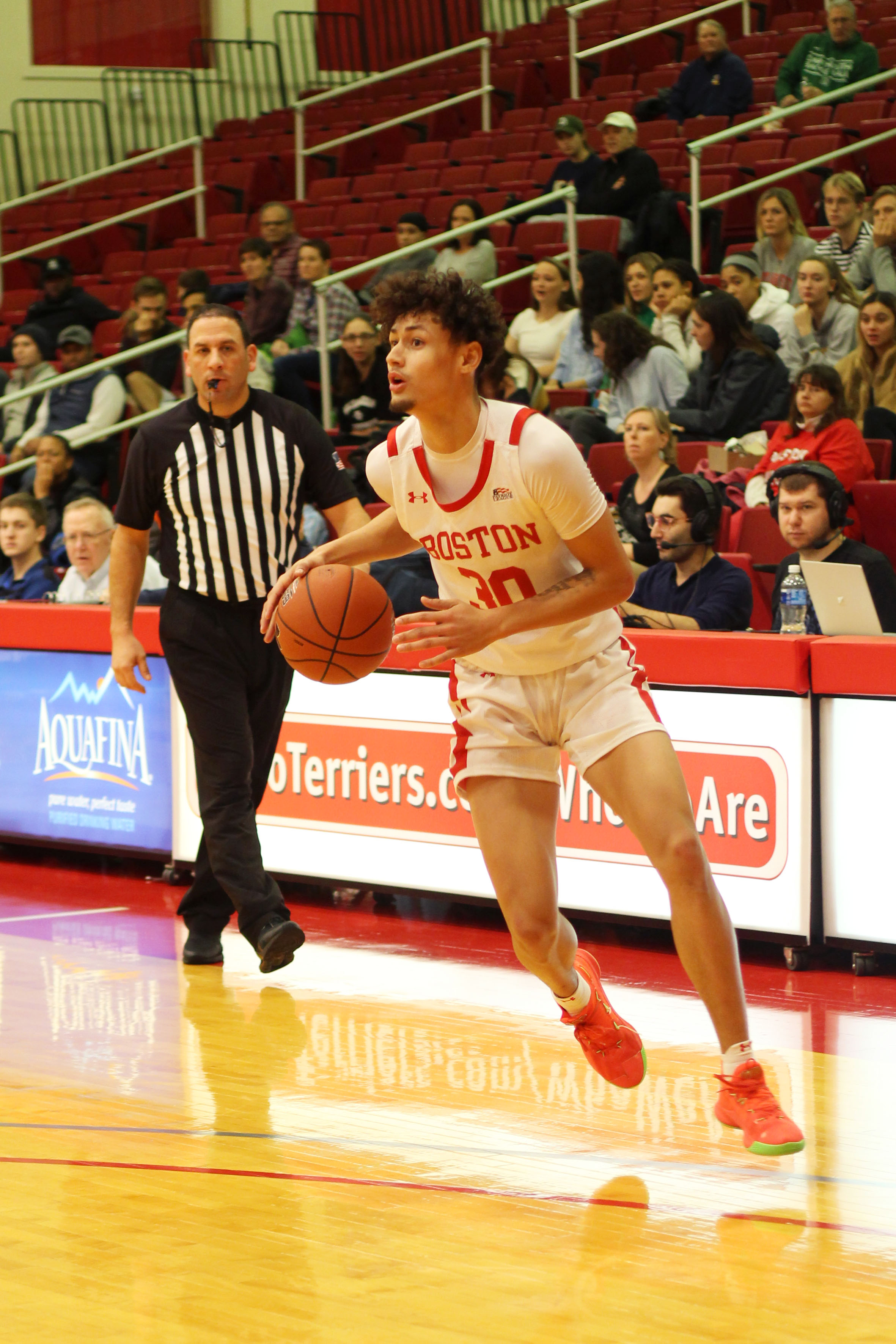 BOSTON, MA — Boston University men’s basketball found itself embroiled in yet another close contest on Saturday after a wild Dartmouth College comeback nearly vanquished a double-digit second half lead.

But head coach Joe Jones and his team remembered the feeling — they had just lost nail-biters to UT Martin, George Washington and Binghamton — and vowed to come out on top.

“We’ve been there before,” junior forward Javante McCoy said. “We know the feeling of not coming out on top, and that kind of drove us to keep going hard.”

The Terriers (4-7) defended Case Gym and secured a much-needed win against the Big Green (6-5), snapping a five-game losing streak that featured two single-possession defeats and an overtime loss.

“It’s a mental barrier sometimes; when you’ve lost a lot of games, sometimes it’s hard to get over the hump,” Jones said.

All five BU starters reached double figures, led by sophomore Walter Whyte’s 17 points. Whyte has been adjusting to a new mask he must wear due to an injury sustained against UT Martin, and while he struggled with five turnovers against Dartmouth, the forward put together his most efficient shooting performance since donning the mask.

“It felt good seeing the ball go through the net,” Whyte said. “It just makes you more confident that the next one can go, too.”

The team also made a blistering 43.8 percent of their three-point attempts, which is a major positive sign after going 0-19 in the second half and overtime against Binghamton.

Perhaps most impressive was the Terrier defense. Entering Saturday, BU needed to contain confident shooters in Dartmouth’s James Foye, Taurus Samuels and Ian Sistare. Foye played well, going 7-9 from the field and scoring 17 points. But although Samuels scored a game high 22, he made just two of his nine attempts from deep, and Sistare failed to knock down a three while scoring only nine points.

Inside, the BU bigs contented well with the physicality of Big Green forward Chris Knight and bench presence Ian Carter. Both pounded the ball inside, but the Terriers limited their quality scoring opportunities, and Knight made just four of his 12 looks.

“Overall, I was proud of the effort we played with [defensively],” Jones said.

“We did well trying to fight through screens and closing out on their shooters,” McCoy added.

In his growing role as an offensive initiator, McCoy notched a career-high eight assists for the Terriers against only one turnover. McCoy has noticeably improved his handle; he dropped one Dartmouth defender midway through the contest with a behind-the-back crossover that led to a nice stepback jumper.

Increased aggression has also led to more scoring and passing opportunities for McCoy.

“Everyone on this team can get it going,” he said. “I’m just trying to step up and make plays and be aggressive … I have a lot of faith that they can make the shots.”

BU heads back on the road again, finishing off their non-conference slate with two in-state contests. The first, next Saturday against UMass Lowell, sees the Terriers play an elite all-around scorer in guard Christian Lutete. The River Hawks stand at 6-6 and also played Dartmouth this season, losing in overtime back in November. Tip-off for BU’s next matchup is scheduled for 1:00 p.m.