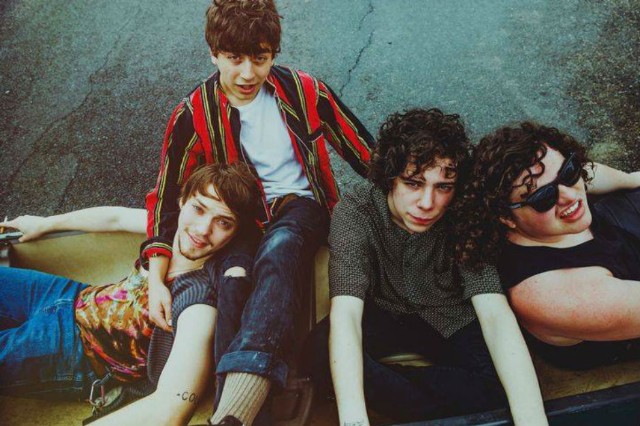 In Chicago in 2010, a couple of high school kids came together to start a band. They were well versed in Chicago’s DIY music scene, attending local shows in their free time, and some of them had played in bands before. Then, they decided it was time to get serious. And thus, Twin Peaks was born.

They recorded their first album, Sunken, in a basement with whatever old and broken equipment they cared to afford. This album gave their bluesy garage-rock sound its fame, earning them the title of NME’s “next big thing.” Their success grew exponentially with each show, and with the release of their next album, Wild Onion. Soon they were selling out shows all over the world and booking major music festivals, famed for their heavy, energetic performances.

With their third album, Down In Heaven, Twin Peaks decided to add groovy country influences to their traditional sound, and maintained this slower, more personal style in their latest album, Lookout Low, which they promoted with their show at the Sinclair on Thursday, December 5th. Despite their increasing success, Twin Peaks choose to remain true to their humble roots by playing at this smaller and famously intimate venue. Throughout the show, it was clear how much they value an interactive and personal relationship with their audience.

Excited fans began to line up outside the venue about an hour before the show. As soon as doors opened, most headed straight to the front of the stage. Bluegrass howled through the speakers.

As OHMME performed, even the small Sinclair was almost empty, but those that were there seemed very much into the weird atmospheric music. Cunningham and Stewart were unfazed by the thinness of the crowd as they danced and played around on stage, giving the performance their all.

When it came time for Twin Peaks, the main floor was packed with fans of all ages. Parents of minors had retreated to the mezzanine. Backlights brought the band into focus, making the experience all the more intimate.

Twin Peaks started out hard and loud with “What’s Up Dawg,” and the crowd went wild. When the song ended, someone shouted, “It’s my birthday!” to which Clay Frankel (guitarist, singer) responded, “Well, happy birthday.”

Frankel had the most dynamic on-stage personality of the whole band, prancing around in a storm of silly dance moves and intense facial expressions, exclaiming, “I’m feeling nice!”

About halfway through “Wanted You” the crowd erupted into a hurricane-like mosh pit.

Twin Peaks enjoyed manipulating their crowd, encouraging moshing and dancing for a few songs before cooling them off with some slower, groovy ballads.

The encore inverted this pattern. Frankel brought out an acoustic guitar for the first song of the encore and sat down with Cadien Lake James (guitarist, singer) for a campfire-style jam that had the whole crowd swaying. The encore ended with the most intense mosh pit of the night, and the band left the stage without even a goodbye, leaving the audience reeling.