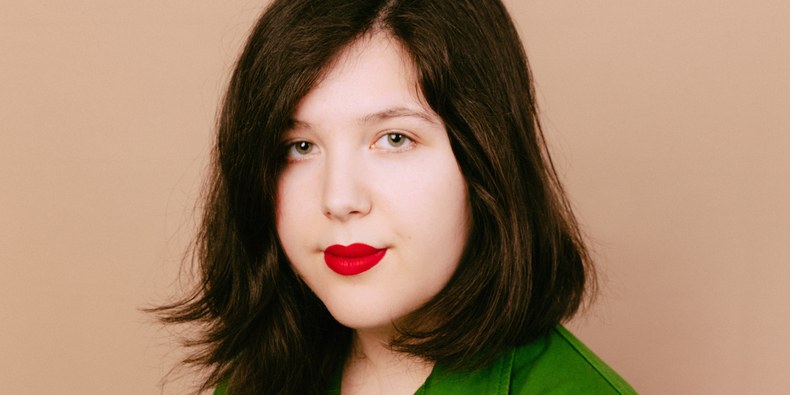 Being in the back of a venue, rather than front and center, would usually be a bummer; as someone who loves music, but has very little attention span, I usually feel like I have to be as close as possible — I want to see the words leave the artist’s mouth, I want to see every detail of the stage to commit it to memory. But seeing Lucy Dacus at The Royale, a venue that, in a way, is prone to getting distracted, I have never been more tuned in.

From my spot off to the side, I’m reminded that sometimes one of the best representations of an artist is the crowd they play to — even in the boisterous venue the crowd, the bartenders, and even the cars outside seemed to fall silent as the humanoid sign on stage lit up, and Dacus began to play.

Dacus’ warm vocals and earnest lyrics draw out the most personal scenes: a woman holding up her phone, pointing at the stage so her partner, who she’s facetiming, could see the show. Couples whispering to each other and moving closer as they hear the first chord of a song they consider their own. Groups of friends jumping up and down as a generally somber song picks up, laughing and belting out the words.

The only word I can think of when trying to describe Dacus’ stage presence is grounded — everything about her feels rooted in itself, so earnest and open and at peace (which could maybe come from me loving the line, “I am at peace with my death, I can go back to bad,” from “Next of Kin,” but it still holds true!). There’s nothing put on about her performance, nothing even remotely forced. It feels like walking into a warm house, coming in from a blizzard to sink into a couch surrounded by everyone you love, creating such a strong feeling of home and comfort and nostalgia that it’s hard to even put into words.

And Dacus, when she does chat with the audience, does so like she’s talking to an old friend. Every break she’s beam and thank the crowd, and always invited them to sing. And like an old friend, everything is on the table, especially politics. As an introduction to “Yours & Mine,” a song born out of being ashamed of the racism and violence happening in the United States and want to stand up and fight, Dacus declares her own feelings to subsequent roaring applause:

“I hope that Trump gets impeached. That just feels like something you should say when you get in front of a crowd,” she said.

She makes it clear that her soft voice and somber songs don’t act as replacements for passion and power as she moves seamlessly between gentle crooning songs like “Fool’s Gold” off her latest EP and sharp, biting songs, such as “Timefighter,” a guitar-heavy, bluesy songs about the harsh reality that we are not invincible, and we are not timeless.

Her final songs, “I Don’t Wanna Be Funny Anymore” and “Night Shift,” were loudly sung back to her in a rousing chorus, with the latter peaking in the final verse as the song, which builds and builds and builds, explodes in a release of guitars and drums and vocals and pure passion. Over the hour-long set, which really only felt like 15 minutes, it felt like everyone in the room was a united force, all brought together by Lucy Dacus.