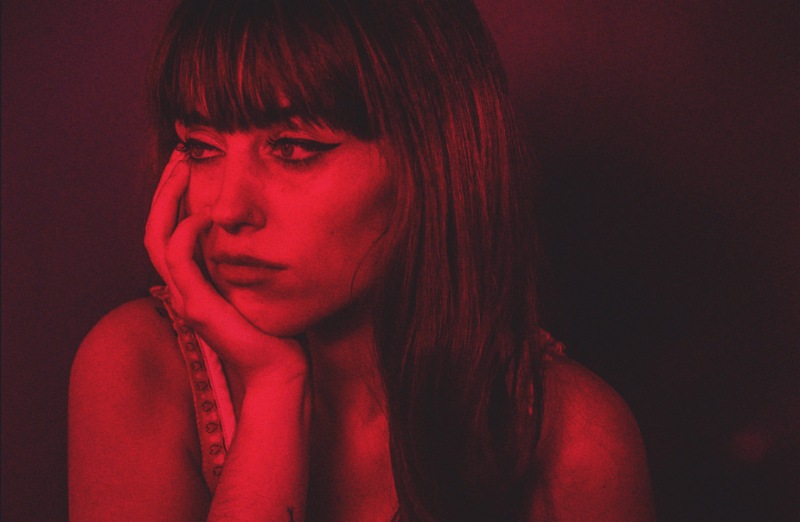 WTBU journalist Grace Lauson sat down with Sasha Sloan to talk about her current tour, past music collaborations, musical inspirations, and more.

GL: Can you walk me through what an average day in your life is like?

Sasha Sloan: Most of the year I wake up around 10:30 or 11. I make coffee, go to the gym (sometimes), then, I try to write a song. Today, I woke up on the tour bus and I have about 3 hours of sleep in me because we had to cross the border from Canada. Then I just sat, all day on the bus until I had soundcheck at 5. Oh, and I walked the Boston Commons with my boyfriend because I’m from here. So I showed my boyfriend Newbury Comics and all that stuff.

SS: You know what, it’s like the grass is always greener. When I have nothing going on I started to feel really bad about myself. I just have too much time to think and then when I’m busy I just want a day to chill. Tour is a lot of just chilling though. It’s a lot of downtime. I have an amazing crew that sets up all my stuff so I just walk on stage for soundcheck, go get dinner, then come back to perform.

GL: Is the team of people you work with the same as it has always been or does that change a lot?

SS: My touring team is always changing and expanding but my management and label had pretty much been the same.

GL: Do you ever get homesick with all of this travel?

SS:  It’s weird. I kind of feel like I have a bunch of different homes now. I have a place in Nashville, one in LA, Boston is my hometown but my mom doesn’t live in Boston she lives in Providence now. So, I don’t really get homesick because I don’t have a  home base. I am kind of always floating. It depends on the time of year though. I miss Boston at Christmas time.

GL: How did you get into songwriting?

SS: I have always been writing songs since I was about 10 years old, cliche as that may sound, but they have all been really bad up until like 6 months ago. It does go through waves. Sometimes, I’ll sit down and won’t be able to make a song for like 6th months and other times I’ll sit down and be able to write 3 songs in one day.

GL: Do you have to force yourself to write every day?

SS: I try. I try. At least a chorus or something. Every writer is different, but for me, I like to step away from songs. I like to write a chorus and then step away from it and watch an episode of Breaking Bad and then come back to it with fresh ears and ask myself: How does it sound?  How does it make me feel?

GL: Can you tell when a song you are writing is good or is it always a shot in the dark?

SS: I know when something is good for me because you just love it and you can feel it in your bones. You are not always right though. Whenever you write something that you really like, I usually have to sit on it for a while, not listen to it, and then go back and edit it. Sometimes it can really just pour out though. It’s all over the place for me.

GL: I know you write for a variety of other artists, how do you decide which songs are best for other people and which you keep for yourself?

SS: When writing for another artist, you usually write with them. Like that day is for them. So usually we are writing about an experience they had and I’m just like an assist in the room. For me, I just write everything with my friend Danny or my boyfriend, King Henry, who is a pretty serious writer. You just know. Especially because my songs are so personal to me, everything I put out is something I have been through so it’s really easy for me to tell. I don’t know. Most of my songs aren’t something big pop artists could sing.

GL: I know you have collaborated with artists such as Kygo and Kaskade. How did these collaborations come about and what was it like to work with them.

SS: This happened before I was an artist and before I knew what my sound was. Kaskade, that song “Phoenix” that I wrote was just a demo and someone sent it to someone who was on their team. I then was called and told that they wanted to put  it on the album and just kind of kept my name on it. With Kygo, I actually went to a Kygo writing camp and we just sat down and wrote it. Then about a year later I got a call that said the song was going to come out on his EP and they wanted to keep my name on that too. I thought that was great.

GL: Is that what is expected to happen when you make a track with another artist?

SS: I never expect it to happen. I just go in every day and write the best song I can write and then I leave. Then, I just hope for the best.

GL: Do you have any other hobbies that aren’t musically oriented?

SS: I love to play video games. That gets me in a different world. That’s pretty much it. I love doing Yoga. Things that get me off my phone. Smoking weed. I pretty much just anything chill. Oh, and watching tv.

GL: Do you have any bad habits?

SS: I just quit smoking JUUL almost 6 months ago which I’m really proud of because that was a fucking terrible habit. They are killing everyone. I’m also a slob. I leave my clothes on the floor and sometimes don’t brush my teeth before bed.

GL: What’s it been like traveling on a bus for this tour?

SS: It’s really bad but I don’t listen to that much music. I listen to a lot of older music like Amy Winehouse, The Killers, Coldplay. Usually, when I’m listening to something it’s comedy. I love to listen to stand-up.

GL: Did you ever think about doing anything other than music or was that always the goal?

GL: and is it still that way now?

SS: Yes. My goal is to always be able to pay my rent and if I don’t have to work at a coffee shop to do it then I’m good.

GL: Do you have a preference between touring or making music?

SS: I think I prefer the studio. I like creating songs. I like making something out of nothing. It’s really chill. Performing is too but it entails traveling, being tired all the time, and not eating well.

GL: How long would it take you to make a track from start to finish?

SS: Every song is different. I have this song called “Dancing With Your Ghost” that I wrote when I was 19 and then I put it out 6 years later. Then there are songs like “Thank God” that I wrote about a week before the EP came out. So you just never know.

GL: Do you have full creative control over what gets on the album and what is released or is there a lot of intervention from your label?

SS: I am super lucky because my label is more of a partner and they really trust me. A lot of artists don’t have that trust. I think it’s because I write and I have the vision. I think the misconception with labels is that they don’t try to control you they try to help you to become who you are so if you kind of figure it out on your own they’re just there to support you. If they think a couple of songs are good they will throw all those opinions at you but they are ultimately there as support. I think it’s when someone is really confused about who they are and what they want to say is when labels begin to look evil. Personally, I love RCA because they just let me create and put my vision out into the world.

GL: Do you have a preference for playing individual shows or festivals?

SS: Usually my own shows are really fun because people are there for you. Also, I’ve been learning on this tour that my fans are really crazy but in a good way. They are screaming sad lyrics which is so sick. At festivals you just never fucking know whose gonna be there. You can’t really soundcheck so you don’t know what the sound is going to be like. You don’t know what the weather is going to be like. I played ACL once and I really thought I was going to pass out from heatstroke.

GL: Can you notice a distinct difference between the crowds you play in different areas or do they all kinda blend together?

SS: Every city is super different. Places that are more in the middle of nowhere go fucking crazy. People say it’s because nothing goes on there. LA crowds are notoriously horrible. Music cities are notoriously horrible. It’s because everyone is there as a critic and not as a fan. Whereas if you are in the middle of Wyoming, people are just there to love what you do. Every city is different but I think Seattle is my favorite city so far. People go fucking crazy there. It’s really fun.

GL: I know you are touring for the few weeks but is there anything else coming up for you? Anything fans can look forward to?

Sasha Sloan is currently on tour. Tickets can be purchased here.