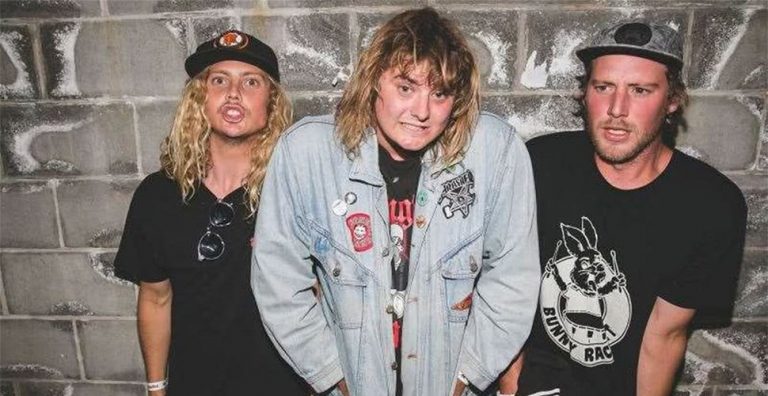 On Nov. 17, Australian rock band Skegss returned to Boston, MA for the first time since the Boston Calling music festival in May 2019. Following the release of their 2019 single, “Save It For The Weekend,” dozens of rock fans piled into Brighton Music Hall, eagerly awaiting some Australian surf rock. Skegss has never toured from coast to coast in the United States before and has predominantly performed in California when they have come to America.

The opening act, Le Shiv, a small Australian garage-rock band reminiscent of Skegss, made the crowd electric with excitement. Le Shiv’s two singles, “No Freak” and “Buzzcloud” were slower and more melodic than Skegss’ discography, yet the lead singer’s passion made the entire venue buzz with excitement for the upcoming Skegss.

Skegss opened up with their fan favorite “Smogged Out” off their 2018 album My Own Mess. Immediately, bodies were in the air and heads were banging. It was impossible to not start bouncing with excitement along with the band. Benny, the lead singer and guitarist, had a cheerful grin the entire night, and continuously made an effort to interact with the crowd as he sang each line and played each chord.

The vocal and instrumental performance was nearly identical to the recorded album. That, combined with the members’ interaction with the crowd and energy on stage, made for a great experience all around. Skegss played songs mostly from their 2018 album My Own Mess but stayed true to classics like “L.S.D,” their first single released back in 2014.

Though the crowd surfers and mosh pit were thriving during each song, lead singer and guitarist, Benny, and bassist, Toby, played their instruments with a relaxed demeanor, as if they were just hanging out. The band’s demeanor fit seamlessly with their carefree surf rock lyrics; before they performed “New York California,” Toby spoke “Boston… this is a song about absolutely nothing,” and passed the mic around to the front row to scream the lyrics themselves.

It was clear to me that people go to a Skegss show for the vibe as much as they go for the music. Everyone, including myself, was having a great time jumping along to the surf rock music and interacting with the band. Skegss performs their instruments effortlessly, yet make sure to have a good time and hype up the crowd by asking questions in between songs, making the entire show as much of an experience as it is a show for music. By the end of the night, you feel like you were just hanging out with some Australian guys yet were doused in sweat from the mosh. It’s quite the juxtaposition.

Playing records from their past three albums, My Own Mess, Holiday Food and Everyone Is Good At Something, Skegss translated the songs to life particularly well. Not only were the vocal and instrumental technique great, but the performing ability of the band members gave the not-so-lyrical lyrics some passion, meaning, and more importantly, fun. Skegss’ interaction with the crowd mixed with their humor and relaxed attitude was a humbling experience and was just as much a part of the show as the actual performing was.

“Boston! We love the lobster roll,” Toby cheered as he addressed the crowd.