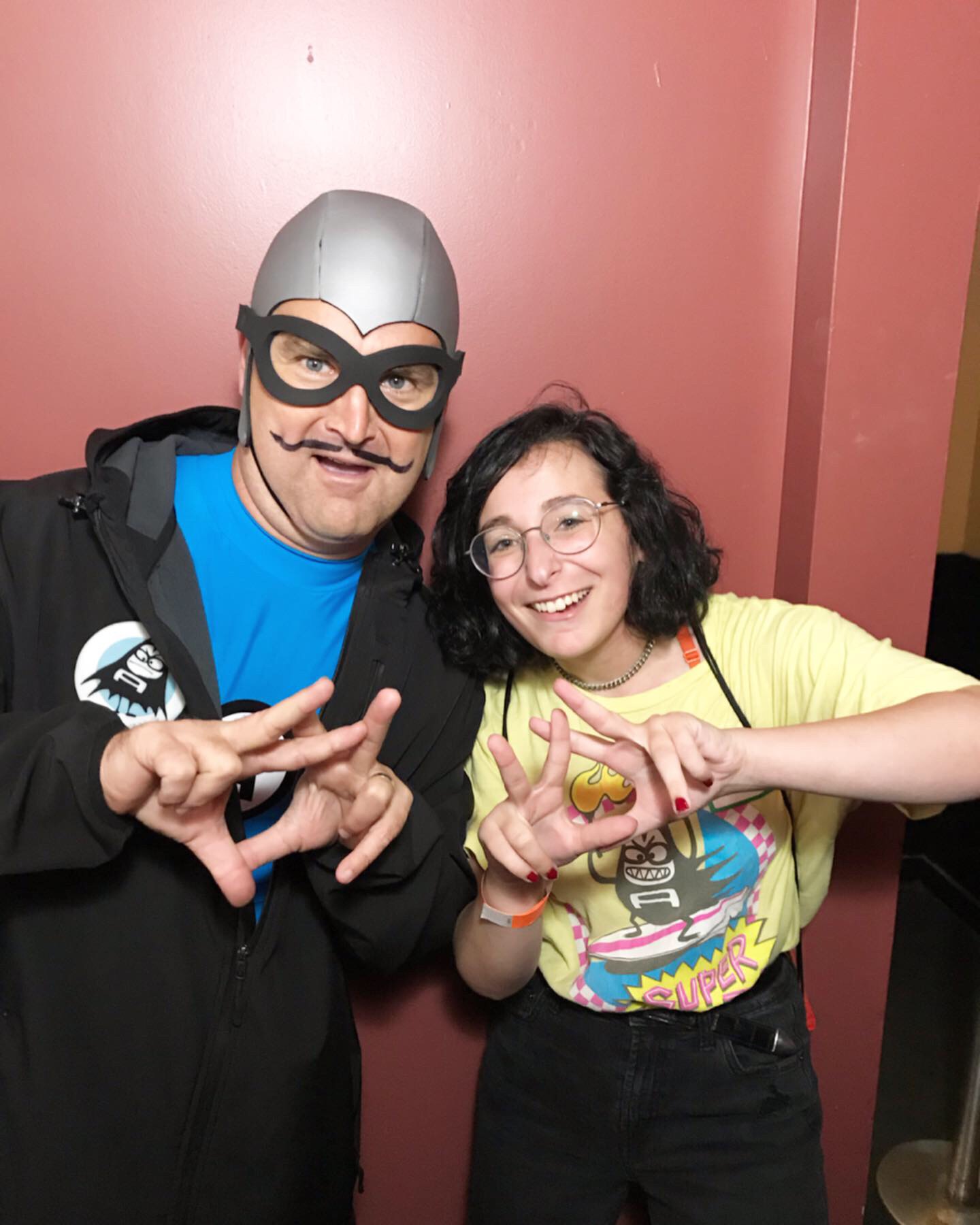 WTBU DJ Danya Trommer sat down with The Aquabats’ frontman Christian Jacobs (AKA MC Bat Commander) ahead of the band’s show at Paradise Rock Club in September. They discuss the band’s Kickstarter, TV show, and future projects.

Danya Trommer: Your Kickstarter just got funded by 690%… What exactly has been your reaction to that? Did you expect it to go this far?

Christian Jacobs:  We were really nervous about Kickstarter, maybe because we’re from a different time, like gnomes or elves or something. We’re kindly people from another dimension [laughs].  We didn’t know how people were going to react, like if there was going to be backlash… Sometimes there’s a perception that crowdfunding can feel like digital panhandling, but someone explained it to us pretty well before we jumped in with both feet and said that crowdfunding is the new generation, [fans] want to be a part [of the process].  You’re giving your fans an opportunity to interact with you and be a part of something, and that’s special for a lot of people… A lot of good stuff has come out of it. I was blown away that it worked. The band was a little doom and gloom about it because you don’t want to put yourself out there and say, “Hey, here’s this thing we want to do,” then the writing is on the wall if nobody donates.  It was kind of like hey this is it, will the Aquabats survive or are we ok with being part of another time.

DT: That sounds like an episode of the show.

CJ: It does.  It was make it or break it.  Fortunately, we have awesome fans and people were really stoked on what we’re doing, and I don’t want to say that we’re #blessed, that’s stupid–

CJ: Yeah! With so many friends! It’s really humbling.

DT: So I know with the Kickstarter you’re able to make two new albums.  I was reading an interview with you that said you’re thinking about going into dance music.  What other genres can the Aquabats venture into?

CJ: Well we recorded one before we left on tour with Reel Big Fish this summer.  It took a month to just get in there and do it. I think it turned out well. Over the years we’ve done so many demos, some of them were rock, some of them were dance-y, some of them were just weird.  I think we just chose the ones that were most ready to be recorded.  That’s the fun thing, though. If you listen to the [Aquabats Super Show] soundtrack that just came out, there’s so many different styles of songs [and] it’s kinda fun just going on a musical adventure.  That’s what’s fun about the Aquabats. Even though we initially we launched in the midst of the ska [craze], we’ve been able to carve our own path and kind of do whatever we want.  I think as long as the songs are fun, sing-alongable, and can be replicated live, whether it’s dance music or country music or elvish lore—

DT: Yeah, like even with your early albums, with songs like [“Lobster Bucket!”], just super weird stuff—

CJ: Yeah! Even songs like Marshmallow Man off our first record, it’s not really ska, it’s more of a swing time signature.  We weren’t trying to get locked into just ska, even though, for what it’s worth, ska is fun live and everyone can dance to it [and] it fit our schtick.  But we want to do all kinds of different stuff. I think as long as it’s fun and silly, no one’s gonna judge us too harshly.

DT: I know even in the days where you guys were wearing wetsuits [as costumes] you wanted a TV show.  Has the TV show turned out to be what you were picturing?

CJ: We had a couple of iterations of the show that we tried to do.  We did a pilot with Disney that wasn’t exactly how we wanted, we compromised a lot of our creative vision for budget reasons… It ended up becoming something we weren’t really going for. I always envisioned it being kind of like a sarcastic Power Rangers, or one of those old Japanese Tokusatsu shows…but the first couple of things we did didn’t really get there.  I think the Super Show has surpassed our expectations stylistically… but it took on a life of its own.  The characters are strong, hyper-reality versions of our own personalities. It’s just fun. There’s a lot of inside jokes that we’re writing for each other, but the biggest benchmark for the show was the fact that kids like it… It reminded me of when I was a kid watching the 60s Batman show and thinking, “This is incredible,” and as I got older [I realized] they’re just joking around. It made me like it even more. Being campy for kids was always the idea, but to be able to do it and have it look so well, we definitely surpassed our expectations. That’s why when [The Hub] went under and we couldn’t do any more episodes… and it hadn’t grown to the point where our cult following [forced a network] to pick it back up, the fans stepping in and saying, “We want to help you guys do it,” was just incredible…

CJ: Yeah, it feels like the Super Show but it’s just going to be shorter.

DT: Will there still be cartoon segments?

CJ: That’s where we had to draw the line because it’s expensive.  Fortunately, we were able to work with some animators that weren’t super expensive, but I think if we start getting some momentum back we can start doing cartoons, we’re hoping…

DT: I know this year marks the 20th anniversary of [album] The Aquabats vs. The Floating Eye of Death, do you think you’re going to do an anniversary tour for it?

CJ: We were talking about that today, actually.  We’re talking about some shows in December, between Christmas and New Year’s…I don’t know, because I know [our album Fury of the Aquabats!] was a classic record and it got a big push and a lot of sales, but when Floating Eye of Death came out, the label we were on wasn’t doing so well and [the album] didn’t get promoted at all.  We would show up to shows and the clubs didn’t even know we had an album out, [and] the fans!  It’s one of those records that slipped through the cracks a little bit, and I think with maybe a lot of our fans over time it’s [become part of] the canon of the Aquabats… We’re thinking about it, but we all have our own doubts about it because we remember what happened when it came out. But we’d love to come do some Fury shows on the East coast, because we only did a couple on the West coast.  So, maybe. If not the whole album, at least a good portion of it.

DT: Could we hear “Chemical Bomb” at some point?

CJ: Yeah, maybe not a medley, but a stretch in the set where there’s like four or five of the solid songs on there.  I don’t know if [“The Ballad of Mr. Bonkers”] will make the cut, but— [Laughs].

DT: We can only hope!

CJ: There’s some good ones!  But that was a weird time for The Aquabats, too, because we were all struggling with [thinking about if] we’re going to keep doing this, and the label we were on was struggling.  Nu-metal was coming in on the radio and was pushing all the fringey ska stuff away. When Limp Bizkit came on, they came on hot and fast. It was hard to fight off that whole decade of negative metal that was definitely not what we were doing.

DT: Yeah, you guys are definitely a very positive force.

DT: Now that the cadet program is back and better than ever, do you think there’s going to be any more cadet summits?

CJ: Yeah! We were talking about it. We were just playing a festival in Orange County [that] was at a location where we shot most of season one [of the Super Show], so we’ve definitely been talking about it.  Some of the guys in the band, who were never super vocal about their enthusiasm were like, “That’d be awesome.”  I think it’d be fun to see what would happen. I’d love to do an East coast cadet summit as well.

CJ: Maybe we’ll do a dual-coast type of thing.  It’d be fair.  We might even go to Australia, or the UK—

DT: Those are more fun than New Jersey.