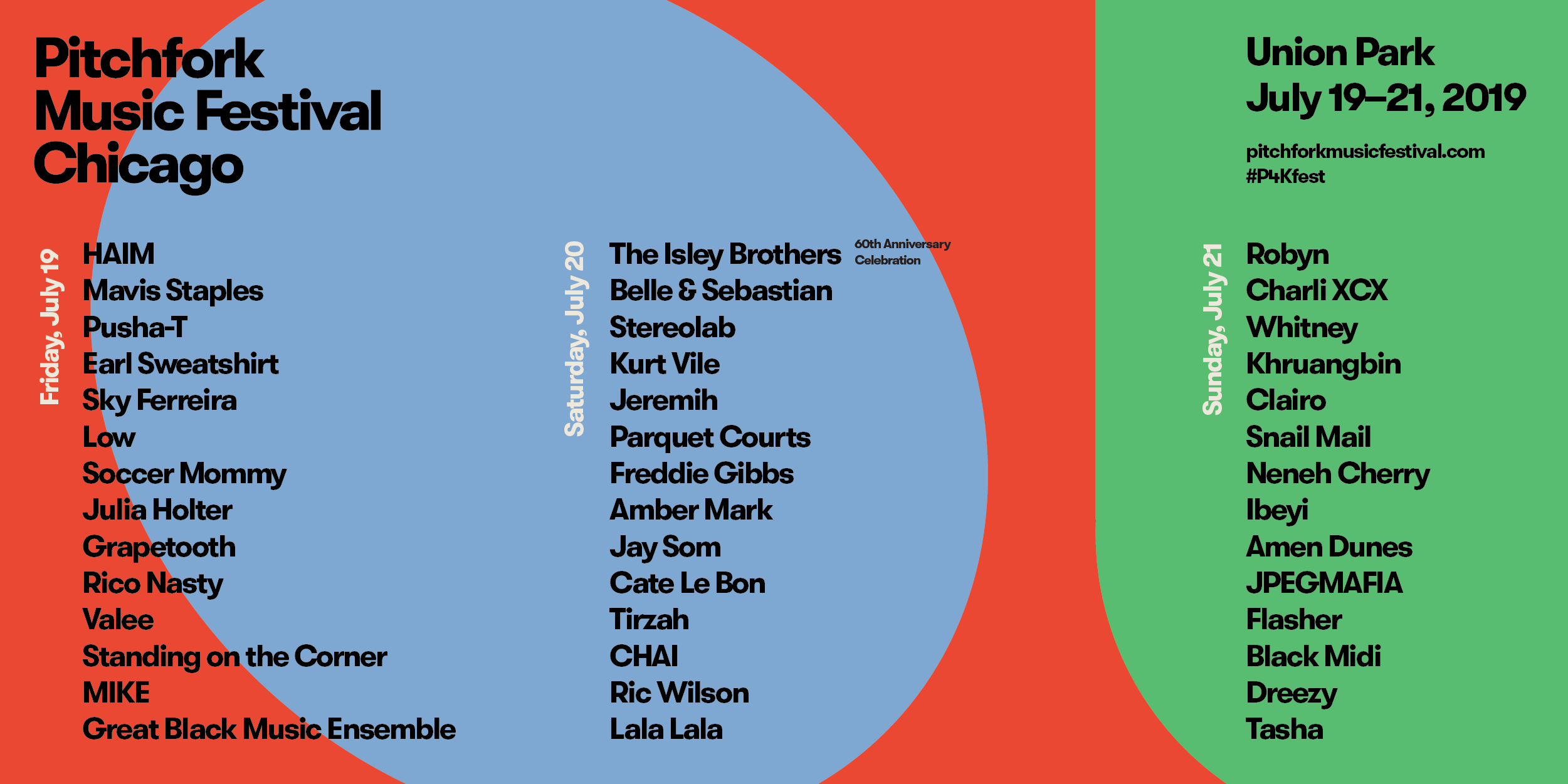 The 14th Pitchfork Music Festival plans to continue its reputation of being “one of the most welcoming, comfortable, reasonably priced, and rewarding weekends of music” in 2019. Hosted at Chicago’s Union Park, the festival will highlight rising powerhouses of various genres from July 19th to 21st. Friday’s headliner is the trio of indie-rock sisters, HAIM, who are fresh off recording songs with Vampire Weekend for Father of the Bride. The Isley Brothers, who headline Saturday, are returning for a roaring 60th birthday celebration. Swedish-pop sensation Robyn will finish off the festival as the final act on Sunday night.

The lineup is packed with artists that will raise the ears of those with their finger on the pulse of anything up-and-coming. For indie/alt-rock, renowned newcomers Clairo, Snail Mail, Soccer Mommy, Whitney, and Jay Som will be making appearances, as well as familiar names like Belle & Sebastian, Low, and Parquet Courts. Charli XCX and Sky Ferreira are sure to make pop fans ecstatic, and Rico Nasty, JPEGMAFIA, and Earl Sweatshirt will grab the attention of hip-hop lovers. The Pitchfork Fest after shows keep the entertainment going with shows from Stereolab, Chicago locals Grapetooth and VARSITY, Lala Lala, CHAI, Black Midi, Snail Mail, and more.

But Pitchfork Fest is about more than just music. The event also highlights local creatives and food vendors throughout the 3-day weekend with a plethora of booths and stalls. Renegade Craft Fair, an international craft showcase, has its home base in Chicago and they boast an impressive lineup of vendors from the US and Canada. (I’m personally excited to see one of my favorite independent vendors, Stay Home Club from Montreal.) There’s also Flatstock Poster Show, presented by the American Poster Institute, is also a Pitchfork highlight. The show allows concert poster artists to display their work and sell various prints. The popular CHIRP Record Fair will also return to Pitchfork Fest, hosted by the Chicago Independent Radio Project. Festival goers are encouraged to arrive early to get their hands on limited edition and exclusive records.

The price of a 3-day pass for Pitchfork Fest goes for less than a one-day pass to some of America’s other big music weekends, making it one of the most affordable music events in the country. Whereas other festivals may aim to pull in their audience for an Instagram-worthy photo wall or just to flaunt an outfit that’s only worn once, Pitchfork ensures an honest and affordable experience meant to showcase rising artists and unique creatives.