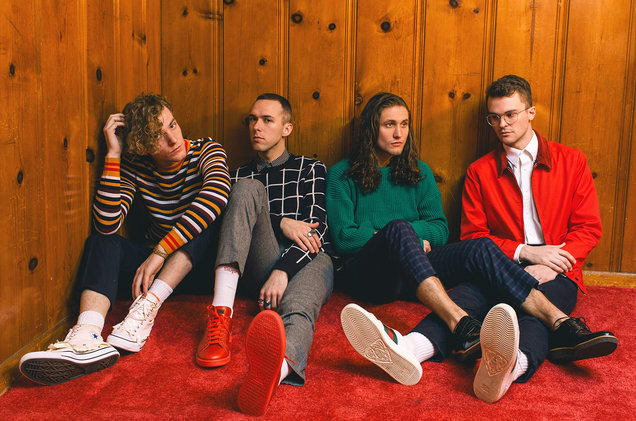 On June 21st, WTBU DJ Monica Sucic caught up with COIN at Rockland Trust Bank Pavilion. The Nashville quartet has grown an immense fanbase since the release of their self-titled album in 2015, and have spent the past few years on headlining tours in support of their sophomore album, How Will You Know If You Never Try?. Currently, they are preparing for the release of their third album and are on tour supporting Young the Giant and Fitz and the Tantrums. Sucic spoke with lead singer Chase Lawrence, guitarist Joe Memmel, and drummer Ryan Winnen about their latest single, their time in South Korea, and their plans for the rest of the summer.

Monica Sucic: How have the past two years on tour been?

Chase Lawrence: They’ve been really good; I think the most tangible, fun ones have been the February shows. They were the biggest shows we’ve played and it felt like ‘We’re doing it! We’re really doing it! Together!’ We had a lot of time off and that was a total reset. If you had asked me that question two months ago, I might’ve told you that I was really tired. But I’m good now.

MS: What was it like to go to Seoul, and are you excited to go to Japan next month?

CL: Yeah! Seoul was great, Korea was our favorite show ever probably.

Joe Memmel: We’re going back and are very excited about it.

CL: We’re going back the day before Osaka. Japan should be a great experience. I don’t know what to expect, so I’m just excited to go.

MS: Which city do you wish you could headline next?

JM: Like it’s the last day on this earth?

CL: I’m very excited to play Seoul again, it was a great show. Again, I’m not going to put expectations on that show either because that one was so special; I’m not even going to try to touch it. Something about playing London, also, was a really special time and I look forward to playing there again. Every show is so special, it really is. There’s never a show that’s never fulfilling and rewarding, even these support shows. You never know, you really never know.

JM: If I were friends with the lovely men from NASA, I’d invite a hundred people up to Mars and we’d play a show there.

MS: What was the inspiration behind the latest single, “Crash My Car?”

CL: The day after we played Music Midtown in Atlanta [in 2017], we played for like 15,000 people and we heard thousands scream “Talk Too Much.” I knew, the next day, we had to write a song louder than “Talk Too Much.” I was so inspired. We went to the studio, literally the next morning, and “Crash My Car” came out in probably three hours. But we didn’t have a story. There was a chorus, there was some lyrics… it didn’t really say much. Then in October [2017], a girl came to a show in Oxford, Mississippi. After the show, she stuck around to tell me that she got in a very bad car accident on the way to the show in Little Rock, Arkansas. Her car was literally totaled — completely totaled. She showed up, still. She drove her totaled car and made it to Oxford, Mississippi in the same day. I was like ‘Why would you do that, that’s so dangerous!’ and she [said] ‘I want to be here. More than I care about my car, more than I care about my possessions.’ It all clicked. That’s what this song means. It’s not about what you have, it’s who you’re with.

MS: Did the writing and producing process change for album three from album two, and how so?

CL: Album two was like a patchwork quilt of producers. It was our friends, and we had a big part of making it, but a lot of people had their hands in the process. It’s not that different from album three in that regard; we have our friends helping out. When you write a song, you make a demo of it, and it’s a worse sounding thing of the real thing. Working backwards, we noticed that our demos sounded more energetic and more emotional than our final recordings. So we set out to make an album of demos. Every time we wrote, every time we played a part, we played it for keeps. We weren’t just making it to get the idea out. We realized that you can’t replicate that excitement that you have on that first try when you go for it. It’s basically a diary — honestly a journal — of what we did for the past two years from green rooms, to the bus, from a van.

JM: Every city has a piece of a song.

RW: Even if it’s a little vocal or something that we recorded in the van, it’s all scratchy but if you isolated it you could hear it.

JM: There’s emotion in every single song all around the world.

CL: From Korea, from everywhere. There’s iPhone recordings, MacBook recordings, and we just didn’t overthink it. Sometimes the stuff sounds a little wacky maybe, but we didn’t want to mess with the emotion.

CL: Too many times we compared it to other recordings where it didn’t sound polished enough or something.

RW: Right, which is unhealthy.

CL: If the emotion is there and the energy is there why would you question it? It’s not about the quality.

MS: Is that why you’ve been bringing up The Committee for Sound and Mind?

CL: Well, the Committee for Sound and Mind is our record label.

CL: It’s a collective of our friends who are designers, photographers, and we’re all building this record label.

MS: Is it Nashville-based?

MS: If you could collaborate with any artist, living or dead, who would it be and why?

CL: I don’t know if I have an answer for that. It wouldn’t live up to whatever I want. I respect and admire so many people, but everybody’s a person.

RW: You don’t even know if it would work, you know? You have your heroes but…

CL: We’ve written with our heroes. Sometimes it’s been great.

JM: I would say Ric Ocasek. If the write went bad, I would honestly just chill with him.

CL: Honestly yeah, Ric Ocasek for the cars. I’ll take that one. He’s still alive. There’s still a chance for that one.

MS: If you could get a tattoo for any artist, song, or album, what would it be?

RW: I would get so many tattoos.

CL: I’m just racing with lyrics and amazing stuff that’s shaped me. There’s this song by this band called The Antlers called “I Don’t Want Love.” I don’t even know what it means, I just know that that song shaped me a ton.

JM: Ask me in a year and I’ll have a whole sleeve.

COIN’s latest single, Crash My Car, is out now and they will be returning to Northampton, MA on their headlining tour this fall.