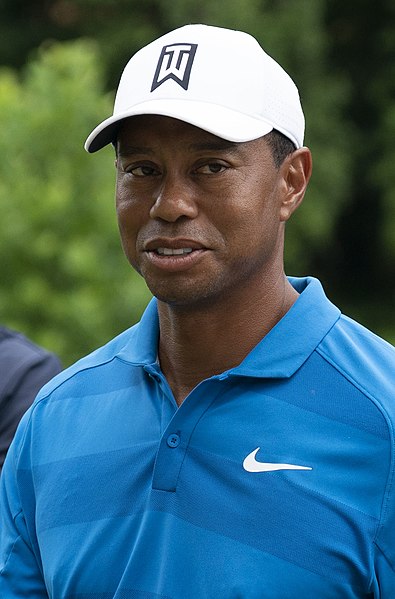 The first two rounds were relatively the same story for Tiger, as he completed a steady front-nine only to go on a big run on the back. However, a 5-under 67 on Saturday put Woods firmly into the mix for what would end up being a historic Masters Sunday (click here to view Tiger’s official scorecard and highlights from the entire tournament).

Tiger started his final round at 11-under, two back of then leader Francesco Molinari. Due to inclement weather in the afternoon’s forecast, pairs became groups of three and all Sunday tee times were moved up to the morning. The final group of Molinari, Woods, and Tony Finau teed off at 9:20 a.m., and the fireworks soon began.

Tiger’s round was not spotless today, especially on the front-nine where accuracy off the tee and on his approaches, as well as putting, hampered him at points, making for a very frustrating one-under par 35 on the first nine holes. Although the 43-year-old only carded two bogeys on the front, most of his pars came with missed-birdies that were absolutely makeable for someone like Tiger. Although, he was able to save par on the ninth hole with a brilliant two-putt.

Molinari was nails all tournament long – his bogey on the seventh hole was his first in his last 50 holes–and showed no signs of looking back as the group headed to the back-nine, where Amen Corner awaited. Finau would not go away either, keeping himself in the mix despite spraying the ball all over the course. Tiger bogeyed the tenth and parred the 11th after a miraculous recovery, while Molinari continued to grind out par after par as things started to look even tougher for the Big Cat. However, when the final group came to the 12th tee, Molinari and Finau each took aggressive lines right at the pin, and, well, it didn’t work out.

With Molinari and Finau in the drink in Rae’s Creek, and the door now wide open, Tiger played it safe and stuck his on the green. The Italian would finish with a two-putt double-bogey, while Tiger two-putted for par to take a share of the lead at 11-under.

Tiger took this swing in momentum and ran with it, birdieing the 13th and 15th holes to take the outright lead at Augusta as Molinari sealed his fate, settling for another double at 15 after putting another one in the drink.

The fireworks didn’t stop, either. At the famous par-three 16th hole, the place to be for hole-in-one-seekers, Tiger nearly canned his tee shot, which would have sent the crowd into complete pandemonium. This set up for an easy birdie putt to extend his lead to two strokes.

A near ace on No. 16, Tiger Woods extends his lead with two holes to play at #themasters pic.twitter.com/9IJRrbfYhc

Woods stepped up to the 17th tee in complete cruise control, knowing his closest threat, Brooks Koepka, was dealing with the circus crowd and would be in the clubhouse before the final group finished. After BOMBING his drive down the fairway, Woods was in for a safe par at 17 before playing it safe down 18.

Tiger would chip on to the 18th green, leaving himself a makeable putt for par to win the Masters, but missed it. The crowd (and Tiger) was ready to explode had he made the putt–it somehow didn’t drop after rolling over the edge of the cup. On a side note: that miss cost me money in my pool, but it’s more than fine, considering our man won.

Molinari and Finau would finish out, giving the stage to Tiger with his tap-in bogey to win the Masters. Here it is in all it’s glory, one more time:

Six (SIX!) different players held at least a share of the lead on Sunday at Augusta. To say the top of the leaderboard was PACKED would be an understatement. I mean just look at the names:  Finau, Molinari, Koepka, Dustin Johnson, Xander Schauffele, Jon Rahm, Jason Day, Webb Simpson, and Patrick Cantlay (who made an incredible run out of nowhere after being two-over after the second round, only to collapse down the stretch). You could say there are at least 16 guys, including Tiger, who all had a shot at the green jacket heading into the final round.

After the very public divorce, the DUI, the health issues, Tiger Woods finally became a winner again on the PGA TOUR last year, winning the TOUR Championship at East Lake in Atlanta. Many (myself included) said the comeback was complete with the win, but others argued a major championship victory was required. Many even said or put money down in recent years on the notion that Tiger would never win another major, or win at all.

As recently as two years ago at the Champions Dinner during Masters Week, Tiger said that he was done and he could be giving up the game. He couldn’t walk without pain. In fact, he couldn’t do much of anything. A month later, the previously mentioned DUI happened. He underwent the previously mentioned spinal fusion surgery in a last-ditch effort to salvage his career, unsure if it would even work. He had to wait several months to even get clearance to swing a club. He had the chipping yips. He couldn’t drive the golf ball. He couldn’t putt. He reached a swing that one of his former swing coaches, Hank Haney, dubbed “a swing he can win with.” He overcame EVERYTHING.

It all came together today.

Say what you will about the personal scandals. We’ll save that for another time and another day. Sunday was special for so many reasons. Fewer people have ever transcended a game the way Tiger Woods has with golf. He doesn’t move the needle; he is the needle.

Tiger now has 81 all-time wins, one away from tying Sam Snead’s record of 82–three away from breaking it. He now has six green jackets, second all-time.

Here those footsteps, Jack? Tiger now has 15 major championships, second all-time and three away from Jack Nicklaus’ record of 18.

The argument will be made that Tiger isn’t the GOAT because he doesn’t hold these records. He’s going to break Snead’s wins record – it’s a matter of time and who knows about Jack’s majors record – Tiger is 43, so that means he has some work to do on that end. Look at the sheer DOMINANCE from 1997 to 2009, as well as in 2013. He basically won everything there is to win and was feared by his opponents. Now factor in the last year and a half. Few have done what he did for such an extended period of time. Fewer would have been able to pull off this miraculous comeback. Tiger has established himself as the GOAT with Sunday’s win.

The fun could just be getting started this year, folks. Tiger has won at two of the other three major championship venues this year: Pebble Beach (U.S. Open) and Bethpage Black (PGA Championship), and Royal Portrush (The Open) is a classic Open venue. Watch out.

He was confident in his chances at Augusta for some time, presumably since his performances at Carnoustie (The Open), Bellerive (PGA), and East Lake (TOUR Championship), telling Barstool Sports in November that he was most confident at Augusta of this year’s four major venues.

With all of that being said, Tiger Woods, the GOAT, is your 2019 Masters champion. The final round was spectacular. He is on top of the world once again. “It fits.”

With a new wave of golfers giving him their best shot during a tightly contested final round of the 83rd Masters Tournament, @TigerWoods proved he still has what it takes to win when it matters most.