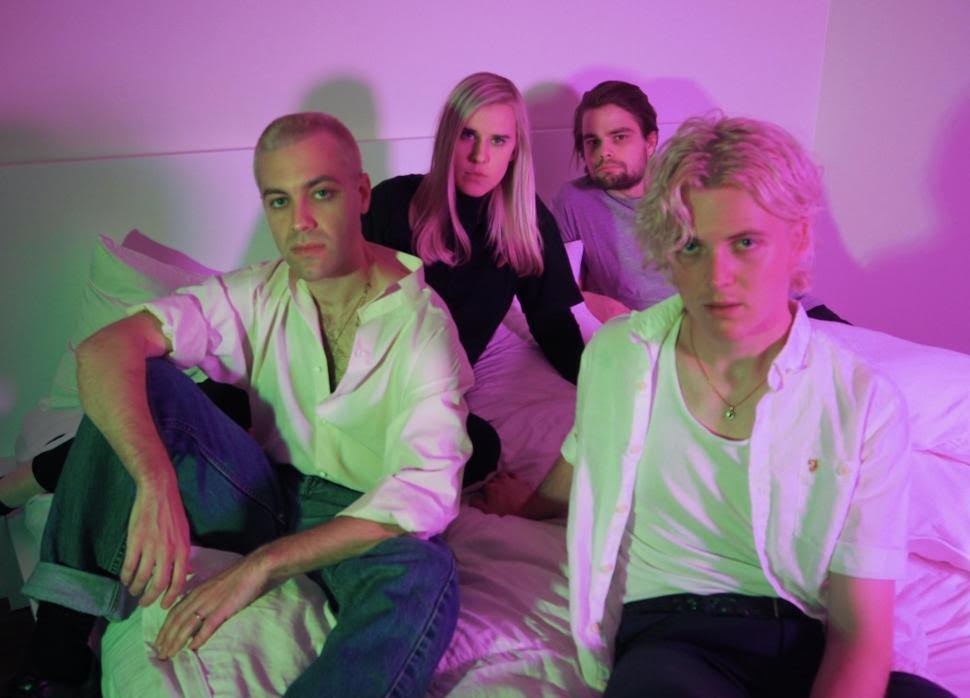 Australian indie-pop band Cub Sport just wrapped up their fall tour in the US and Canada. The band–comprised of lead singer Tim Nelson, keyboardist Sam “Bolan” Netterfield, bassist Zoe Davis, and drummer Dan Puusaari–has had an eventful year after releasing their sophomore record, Bats, in 2017. They toured from late February to early May, supported Vance Joy throughout September, then hit the road again in October. Nelson and Netterfield, who publicly announced their engagement last year, got married in August–all while finishing their third, self-titled album, set to release on Jan. 19. WTBU writer Angel Kim chatted with Nelson and Netterfield before their show at the Red Room at Cafe 939 on Nov. 8.

Angel Kim: First of all, welcome to Boston! How has your day been?

Sam Netterfield: Sturbridge, an hour-ish away.

AK: Oh yeah, I’ve been there once a long time ago.

AK: There’s a lot of places to go shopping.

AK: And also, how are your dogs?

TN: So good, I’m so excited to see them–less than a week now until we’re back home. But yeah, my mom’s been sending me photos of them I’m missing them so much.

AK: So you came to Boston yesterday?

TN: Yeah, we drove from Toronto to Sturbridge and then we just made the rest of the trip up this afternoon.

SN: We stopped at Niagara Falls along the way. What was a six hour trip ended up being like a 10 hour day or something like that, because we kept on making stops, but it was nice.

AK: Yeah, it’s beautiful up there. And you came to the US this past spring too; how has this tour been different or the same?

TN: The weather on this tour has been really beautiful. Last time we played up in Montreal we got caught in a snowstorm, and it was much colder than we were expecting.

SN: We thought the weather last time was going to be the like it is this time, so we didn’t bring anything. We were grossly underprepared.

TN: And we spent like half the tour in snow, and I got really sick. We had to cancel our Boston show last time, because I had the flu. We’ve all stayed healthy on this tour and made it to every show which is great.

AK: Do you notice that there are any familiar faces in the crowds, too?

TN: Yeah, it’s so nice. We played in Toronto two nights ago, and there were a bunch of familiar faces in the front row. I got handed a pride flag while I was singing, and then I realized that we had signed the same flag, and it was the same one that had been handed to me when we were here in the spring, so it’s pretty cool to have all these beautiful people coming back.

SN: And sometimes it’s like putting a face to an Instagram name or Twitter name or something that you see popping up every now and then; it’s really cool.

AK: I also noticed you guys interact with fans a lot on Instagram and Twitter, so how does having social media make getting closer to your fans easier?

TN: I think just being able to build that connection directly. We don’t have a record label or anything, so it feels like everything we do is coming straight from us. And being able to form that direct connection with our fans kind of feels like we’re developing friendships and stuff with them, because you really do start to become familiar with the ones who always reply. I think it’s really special.

AK: Yeah, I know of @cubsportstan on Instagram; I see them all the time. It’s pretty amazing.

SN: They’re from relatively close to here; I wish they could come.

TN: She was in my dream last night! [Laughs]. She couldn’t come to the New York show which was the one closest to her, and then last night I had a dream that we played a show and she was there.

AK: Moving on a little bit, what are some of your favorite songs to play live?

TN: I really love playing our new single, “Sometimes.” It feels like it’s got a lot of energy when we play it, something pretty special about it. And I love playing “Come on Mess Me Up,” and “Look After Me” is another one of my favorites to play.

AK: About the new song, what inspired you to move more in that synth-heavy, more upbeat, dance style?

TN: I’m not sure. I guess when I’m writing and recording songs, I usually just sort of follow a feeling. I don’t usually think of something that I want to write; I kind of just start writing, and then take it wherever it feels right. I guess it just felt like the right way to translate what I was feeling into a musical form.

AK: And since you’ve been on the road this spring and went back home this summer, do you think you work better when you’re on the move in terms of coming up with new material, or do you have to be settled down?

TN: I think a bit of both. The album that we’re releasing in January, I worked on a lot of that while we were touring in the spring–which was a first for me, because I guess I’ve just usually done most of my writing when we’ve been at home. But we’ve been a lot busier this last year, and I think it kind of brought something new, which was cool. I guess if I’ve got time, I like to do it wherever I am.

AK: And for the rest of the album, is there a way you can describe how it sounds or do we have to wait for that?

TN: I feel like it sounds more confident than anything we’ve put out. To me it feels like it fits in with the progression from This Is Our Vice into Bats into this one. I think that the three albums together almost feel like three parts of one story or something. I think in terms of genre, it’s probably more pop, but I still feel like it’s got a gentle energy around it.

AK: Yeah, I notice your albums sound like the same band, but I love how you have different styles in each one.

SN: So this one sort of follows that trend, it does have a progressed sound and a distinct energy that links it all.

AK: And this one also has collaborations with Mallrat and Golden Vessel; how did those happen?

TN: I’ve been writing and recording the Mallrat song, “Video,” and I had a space where I was going to do another verse. I felt like Grace, or Mallrat, would fit the song really nicely. I sent it to her, and she was really keen to jump on it, so she came around and recorded a verse. It kind of sat like that for months, and then just before we were kind of locking the album away, she said that she wanted to re-record it. She wrote something that was like half the length, but it just felt so right when she sent it. I heard it for the first time when I was out on a run, and I was just like covered in goosebumps. It’s really beautiful and after we did that, she put me in touch with Max, Golden Vessel. She was like, “This vibe could fit really well with what Max is doing,” and so yeah, that’s how that happened. Max and I ended up writing a bunch of songs together, and there are five songs on the album that Max and I did together.

AK: Have you been thinking about doing collaborations for a long time or did this more organically just pop up?

TN: Yeah, I think it’s more of an organic kind of thing. I feel like as I sort of become more sure in myself creatively and am able to discern what I’m feeling and that sort of thing, it’s felt more comfortable to collaborate with other people, because I’ve kind of felt like I’ve been able to vibe it out and make sure that it’s all kind of feeling right in the moment. It’s been like the first time that I’ve collaborated with people and had a really positive result, so it’s been really nice.

AK: This is kind of out of curiosity: I noticed a lot album art for this one has your tattoo on it. Does it mean anything special?

TN: I kind of had that tattoo visual. Like I’ve been visualizing it and then when it came to the point that I was like, “I wanna get it,” I sketched it out and then Bolan tidied it up and tattooed it on. And when he put the transfer on before he actually tattooed it on, I looked in the mirror and I just felt like getting it was going to change who I am or change the course of my life or something, and I kind of feel like it has started to do that already. A dove is a symbol of love and being a messenger, and spreading a message of love is something that I want to do with my life, so I kind of feel like having it there is a reminder of that, too.

AK: How would you say that being an independent band has impacted the way you sound?

TN: I think that it has meant that the music that we’re putting out is in its purest form. There aren’t people who are trying to make it fit into a channel that they feel is the path to success or what people want to hear. It’s just exactly what is flowing through us and what feels right, not what someone thinks is the right thing that’s going to be successful.

AK: And finally, I know you got married recently, so congratulations! What is it like to be on the road pretty much right after that?

TN: It’s good. We were saying, we’ve been sharing a room with Zoe for a third of our marriage, like the three of us in a de facto relationship [laughs]. No it’s good, we’ve been doing this for so long now, the four of us, that it feels like we’re family and so it’s kind of what we’re used to. It feels really normal to be around each other so much.

SN: The fact that we get to do it together as well and spend all day everyday together, not many people get that opportunity, especially doing something that you love. We feel pretty blessed.