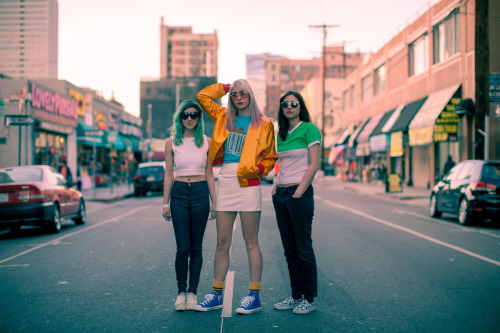 Potty Mouth, an all female punk group formed in Amherst, Mass. by members Ally Einbinder, Abby Weems and Victoria Mandanas will play the Middle East Downstairs this Thursday. The Cambridge show will mark almost the halfway point of the group’s large-scale national tour, which includes a week-long stop at SXSW. WTBU DJ Allie Miller spoke with the Einbinder and Weems about the tour, their upcoming album and how their recent move to LA takes Potty Mouth’s career up a notch.

AM: Are you guys at the beginning of your tour?

Potty Mouth: Yeah, we just started about a week ago. We played in Minneapolis last night and we’re playing in Madison, Wisconsin tonight.

AM: How’s tour been going so far?

PM: It’s been pretty good. It’s been a lot of long drives between shows, so we haven’t had a lot of time to actually hang out with other bands except for at the venue. I think that once we get to the East Coast and the drives will be shorter, well have a lot more time to explore and hang out and have fun.

AM: Who are you touring with again?

PM: We’re on tour with PARTYBABY and Tennis System.

AM: Did you know the bands beforehand?

PM: Yeah, we knew PARTYBABY because they’re our friends who live in LA, and Tennis System are on the same management company as us so we knew them because of that.

AM: Have you toured a lot at this scale before?

PM: We’ve done a few U.S. tours in the past, mostly just opening for other bands. So, this is definitely not our first full U.S., but it’s our first actual headlining tour I think in a while. So, it’s interesting. I don’t know, I think it’s going good so far.

AM: I saw that you’ve toured with Perfect Pussy and Swearin, and Waxahatchee. How was touring with them?

PM: It was really fun! I don’t know, those tours were also full U.S. tours, and that was great. We got to become really good friends with everyone. We still kind of hang out with everyone when we’re in everyone’s hometowns. Those are the best tours, when you can become friends with people and actually hang out with them outside of the tour, because it’s really hard to do that sometimes.

AM: It’s hard to connect with them after tour sometimes?

PM: Yeah, because everyone then leaves to go on tour again, or they go back to their jobs, or because they live in other cities. It’s hard to reconnect sometimes. So, it’s cool to like go on tour and go to people’s cities and try to see them.

AM: Yeah, you can have new friends all over the country!

AM: I heard guys are now located in Los Angeles, even though you’re from the Boston/Amherst area?

PM: Yeah, we lived in Western Mass up until recently, and then we moved this summer in June to LA.

AM: Why did you decide to move?

PM: Western Mass is too small of a place to try to break into being a full-time musician, and LA is really the place to do that. It’s also where our management company is based and we’re just sort of condensing all of our resources. We’ve been really productive since moving there as well.

AM: Really? Productive as far as recording?

PM: Yeah! We started recording our album, which is taking longer than we had expected, because it keeps getting broken up by touring and scheduling conflicts, but we have about half of our album done at this point I would say.

AM: Where are you recording?

PM: Our management has a studio at their office, and they have a recording engineer there who is there all the time. So we just schedule time to go in and work on it with him.

AM: Has the ease of the process changed the sound of this coming album?

PM: Um, it’s interesting because we recorded a few songs before Christmas, and we did it in a way where we rehearsed a bunch. Then we started by recording drums, and then adding guitars and bass and vocals and all the other stuff on top of that, which is how we’ve normally done it in the past. And then after the holidays we came back and started to record more, and we were trying a new thing we’re we use program drums, so we can record the bass and guitar and vocals on top of that, and then change the drums whenever we realize that something needs to be different. That way, whenever Victoria needs to go in to record, it’ll be like the absolute best version of what we could play. I think this process is really going to help our songs.

AM: Yeah, like make them crisper or more structured maybe?

PM: Yeah, like more thought-out, because it’s hard. Basically in pre-production, we’ll have to play a song over and over again to see how one small change would make a difference, but this way we can just like program it, and it takes 10 seconds, and if it sounds dumb we can just take it out.

AM: I didn’t even know that was something that people did. Did the producer at your station tell you about that option?

PM: Yeah, that was his idea, because we haven’t had a lot of time to record. So he was like “Maybe we’ll just try this since we don’t have time to record them over and over.”

AM: Besides being more productive or trying new things recording-wise in LA, is there anything about the city that helps you function as a band differently? How has being a band there been different than being a Western Mass band?

PM: Well, we moved to LA knowing that the band was going to be the only thing that we do, or at least we would try to make it that way, like making it our full-time job and devoting all of our time and energy to it. So it was an intentional move in that sense. Whereas, when we formed the band, we didn’t even really all know each other. We were just these girls in Mass. who got connected through this shared interest of playing music together. I had a full-time job out there the entire time we were a band, and I quit my job to move to LA. So in terms of how living there has affected us… we think of everyday as a work day. It’s definitely different not having a boss or a structured schedule dictating what you do, but there is still so much more structure to our lives, because the band is our purpose now.

AM: It sounds like a lot more time spent working on Potty Mouth now that you’ve moved.

PM: I mean, yeah, we just are trying to make it our only job, getting it to a point where it is lucrative. We’re making a long-term investment in dedicating all of the time and energy we have.

AM: How did you all first meet each other?

PM: Victoria and I went to college together. We went to college in Northampton, Massachusetts. She was just a few years behind me, and after I graduated, I had already been playing in a couple other bands, and I really wanted to be in a band with all women. So I asked Victoria if she would want to play drums, because I knew she was a really good drummer. And Victoria knew Abby really wanted to be in a band also, so the first time we met was at our first band practice. It was really random. None of us really knew each other beforehand, but through the band we’ve become like a little family.

AM: How long has it been since you formed?

PM: Six years. We formed in February 2011. I mean, we didn’t form as a serious band though. The goal of making this band a full-time band didn’t emerge until last year or the year before. When we started the band it was like, yeah, let’s play some punk shows. It wasn’t something we did very consistently because Victoria was busy being a student and going home to South Carolina over the summer. But once our lives started to level out a little bit we started dedicating more and more time to the band.

AM: What do you mean by level out?

PM: I just mean that the more we did it, the more opportunities came, the more we had to take them, and then we all had to consider how much of our time we were willing to commit to it, and we all loved doing it. We all were having a lot of fun, and therefore, Victoria decided to stay in Mass. to be in the band. Abby decided not to go to college so she could stay in the band, and we all just began making sacrifices in our lives that made the band a part of our lives at a more serious level.

AM: Are you guys excited for this Thursday’s show in Boston?

AM: When you were living back here, where did you play shows?

PM: We played more shows in Boston than in western Mass., because as a band in western Mass., Boston is the closest city that you have available to you. So for us, the support we got from Boston early on was always the strongest support. It kind of started to feel like a home for our band. Like, my parents live in Albany, New York, but they’re driving to the show in Boston. It just feels like the most homecoming show that we’ll have on this tour.