The denominator population is configured within the Population: Denominator Tab of the HOME Cell.  The i2b2 database is very large (over 1 billion rows of data) so it is important to limit the amount of data that is being evaluated to deliver results in the shortest possible time.  For this reason, HOME Cell queries begin with an “Initial Query” which is a query build in the i2b2 Query Tool.  This query needs to include every possible patient that could be (but ultimately may not be) included in the denominator population.  For example, if the HOME Cell user aims to measure obesity rates in primary care patients then starting with the population of people who have ever had a primary care visit AND who have ever had a BMI measured would be an appropriate Initial Query.  To begin, drag and drop a pre-existing i2b2 Query into the Initial Query field as shown below.

After specifying the Initial Query, the actual denominator population (a subset of the Initial Query population) is designed using groups and constraints.  If, for example, we would like to assess obesity rates amount adult primary care patients by year, the denominator population should include patients who had a visit to primary care site AND who were 18 years old or greater AND who had a BMI measured during each reference year.  An example of this is shown below: 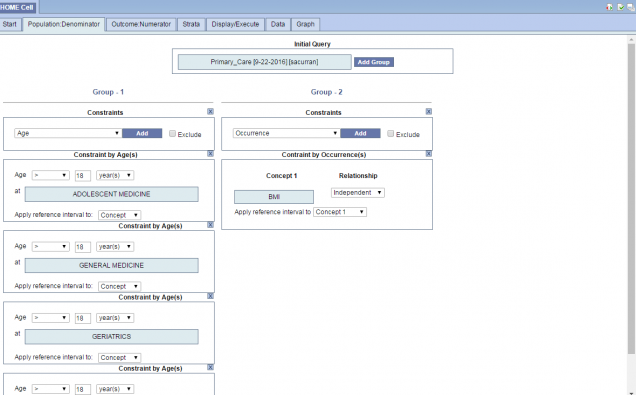 Note: In this example, both the visit and the BMI need to have occured during the reference interval (which would be “Year”)

Testing the use of a box appearing on every page.