Zahdi Dates and Poppies tells the story of a U.S. Marine pilot who comes home traumatized from a tour of duty in Iraq, his nightly dreams haunted by the ghost of an insurgent he killed during a bombing raid that also saved the life of a fellow Marine. The fighter pilot’s wife, despite her own deep antipathy to war, tries to support him as he struggles with combat trauma. This modern-day tale of sacrifice, conflicted duty, and possible reconciliation incorporates music, choreography, and design elements (including an exquisitely hand-carved mask) drawn from the ancient Japanese performance art of noh.

Written by Carrie J. Preston with a score by David Crandall, Zahdi Dates and Poppies explores the emotional cost of war, not just on those who fight and kill, but on their loved ones and society at large. Theatre Nohgaku performed the world premiere of this nuanced work under the direction of Jubilith Moore on March 30th at the Tsai Performance Center, 685 Commonwealth Avenue in Boston.

The performance was named one of the Best Stage Productions of 2016! Here is the citation: “America’s (and Boston’s) theatrical mainstream remains obsessed with naturalism and genre TV, so the opportunity to see work informed by a foreign idiom is welcome – and to see it done well is a rare treat. When Theatre Nohgaku came to town for a residency at Boston University, the troupe performed an English language translation of the classic Noh play Sumida River. The second show on the bill, however, Zahdi Dates and Poppies: A Warrior Play, offered something rarely found in new American plays: catharsis. (It’s notable that the only new American play to deserve a spot on my list was written, developed, and staged outside the usual business-as-usual circuit.) Written by Carrie Preston, a professor of English at Boston University, Zahdi Dates incorporated the techniques of Noh performance to tell the tale of a U.S. Marine fighter pilot dealing with survivor’s guilt after returning home from Iraq. Sadly, Nohgaku’s residency was all too brief. Hopefully they will be able to bring this bill (or another as illuminating) back to Boston at some point in the future.

Note: In addition, Preston is also the author of the fascinating Learning To Kneel, a scholarly exploration of the intersection of Noh and modernism.” http://artsfuse.org/153447/theater-feature-best-stage-productions-of-2016/

Read a review of the performance by Ian Thal: http://artsfuse.org/tag/zahdi-dates-and-poppies-a-warrior-play/

Read an interview with the artists here: http://howlround.com/zahdi-dates-and-poppies-noh-drama-at-boston-university

Read blog posts by the writer and composer: https://theatrenohgaku.wordpress.com/2016/02/11/finding-the-dog-in-noh-and-leaving-it-alone/ 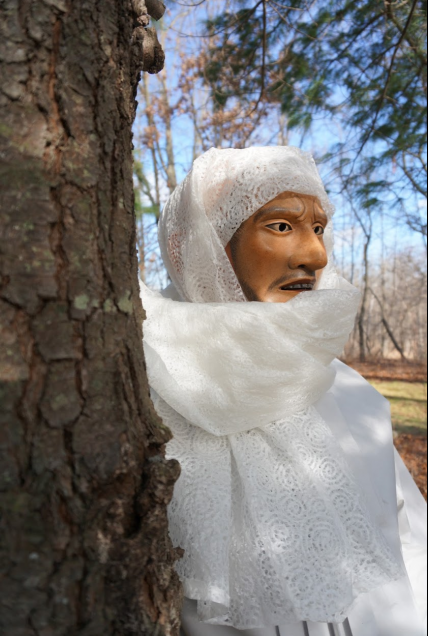 Playwright’s Statement:
I first experienced noh while visiting my husband at Marine Corps Air Station Iwakuni, Japan. That fascinating and baffling daylong performance launched a journey I wasn’t expecting. I traveled to Tokyo to train in noh performance technique, wrote a book about noh and modernism that required research in Japan, Ireland, and England, and ultimately drafted a series of noh-inspired plays, including Zahdi Dates and Poppies.

As I read every noh play I could get in translation, I found myself drawn to a famous group of dramas about defeated warriors. I hoped that this ancient form of warrior plays could help me explore my personal struggles with my husband’s deployment to Iraq, particularly the fact that he had killed those I could not consider enemies. He had taken lives that felt the love I feel, appreciated the beauty I appreciate. I wanted to explore a heartbreaking, deadly situation from a variety of perspectives. In this play, there are no heroes, villains, or innocent bystanders.

Noh inspired Zahdi’s journey to Iraq, but I don’t consider it a noh play. I hope the ghosts of defeated warriors, who have visited the noh stage for six centuries, might help us confront the trauma of war that persists long after the battle is over. Please join us on this journey.