Full details of each project are linked to the titles below.

Organic semiconductors are a unique class of materials that combine the processability of organic materials with the optical and electronic properties of semiconductors. These complex materials impact several areas of technological importance including energy (solar cells), displays, (light emitting diodes), electronics (field effect transistors), and health (sensors). These carbon-based small molecules, oligomers or polymers that were initially envisioned as replacements for silicon and rare-earth metals based semiconductors widely used today. However, organic materials can be used to produce devices with properties that cannot be attained with inorganic materials, such as color tuning and fabrication on irregular surfaces. Although there are many known organic semiconductors issues such as the scalability of chemical synthesis, elimination of defects within the materials and overall improvements in performance need to be addressed allow for advancements in the large-scale manufacture of ”plastic” electronics. As organic chemist, we are able to employ an atomic level approach toward developing new organic semiconductors. The Jeffries-EL group has developed several novel building blocks for the synthesis of conjugated polymers. Her synthetic methods have spawned a new generation of materials that posses many promising properties for use in a range of organic semiconducting applications. 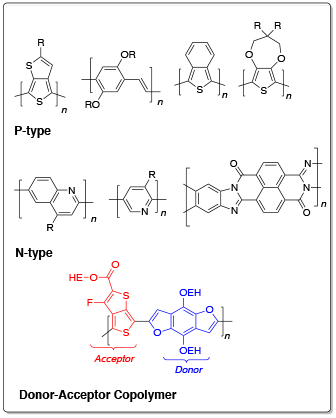 Conjugated polymers are unique among all polymers because they posses a backbone with an extended p-conjugated systems.  This extended pi-system contains delocalized electrons, and can be regarded as intrinsic semiconductors. These materials can then be doped to form a conductive material.  The discovery of this resulted in the awarding of the Nobel prize in chemistry in 2000. We can classify these materials in analogous fashion to their inorganic counterparts as p-type (electron donating/ hole transporting) and n-type (electron accepting and transporting. Some examples of typical conjugated polymers are shown on the right. Typically, these polymers bear substitutents off of the polymer backbone to improve processing and solubility.  The substituents can also be used to alter the electronic and physical properties of the polymer. Initially, the field focused on the synthesis of homopolymers, based on the same repeating unit, however in recent years systems based on alternating electron rich and electron poor heterocycles now dominate the literature. These so called donor-acceptor copolymers allow for facile tuning of the optical and electronic properties through selection of the strength of the components.

2. Synthesis of novel materials based on benzochalcogenophenes

4. Synthesis of conjugated oligomers in flow

5. Synthesis of tunable polymers based on benzobisazoles.