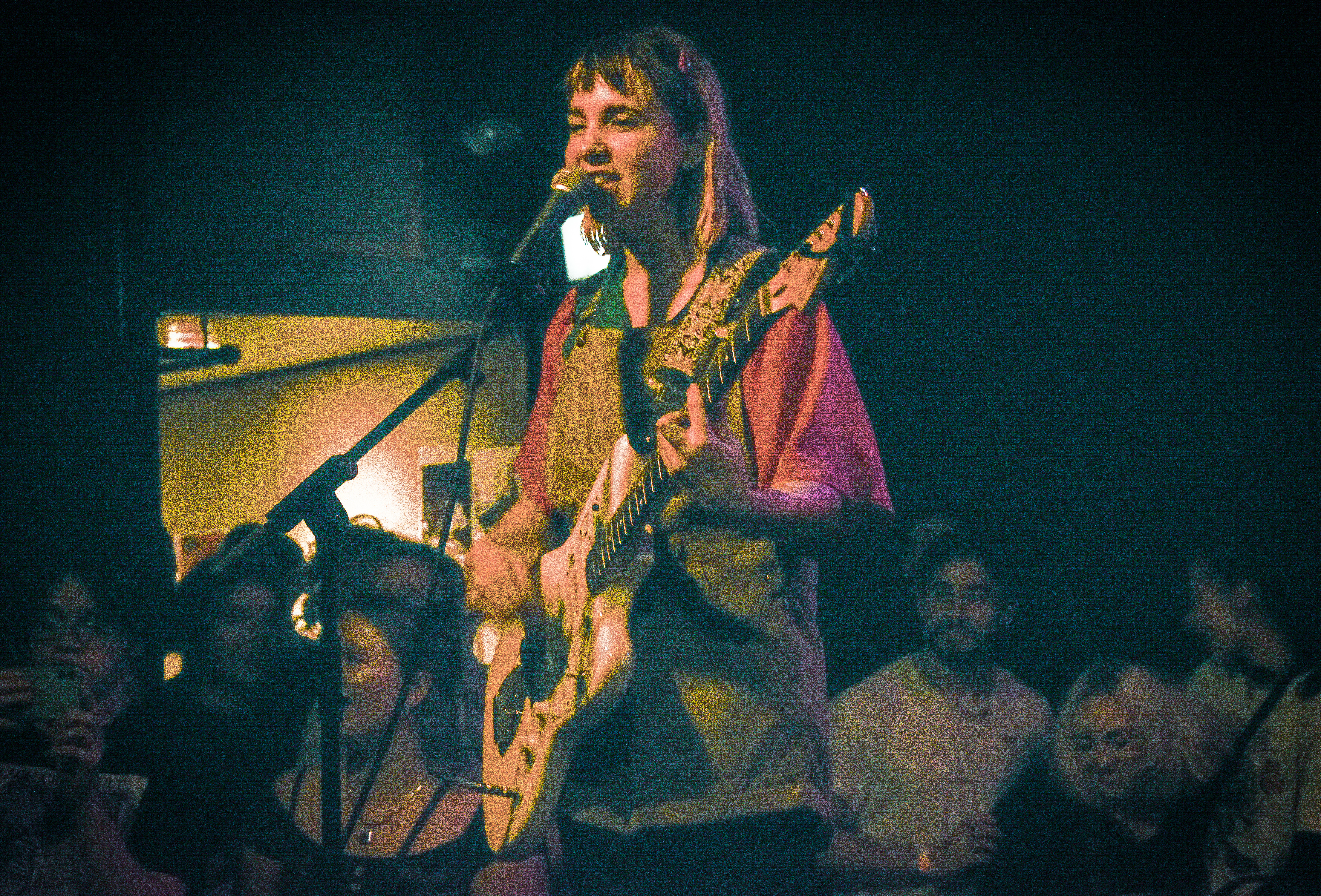 On Wednesday, November 20th, Beach Bunny graced the stage of Great Scott in Allston with Another Michael, continuing merrily along on their “Goodbye Summer” tour.

Doors opened at 8:30pm and fans funneled towards the stage, save for a wayward glance towards the merch table. The small stage and narrowness of the corridor leading to it made Great Scott look like a full house before the openers began setting up. Murmurs of excitement permeated throughout the venue, strangers shared stories of their experiences or lack thereof of Beach Bunny. For a fair bit the audience got comfortable and payed little attention to three members of Another Michael preparing to perform. From house left to right, they were wearing socks, crocs, and boots. A performance should not be judged on the attire of the band, but it represents the vibe in this case. Lead singer and acoustic guitar Michael Doherty standing center stage started the first song via synth.

These synthesized sounds threw a shroud over the audience, all conversations stopped short. After allowing the synth time to establish itself, Doherty added his falsetto to the mix. Red and blue stage lights shined purple onto Another Michael, and not long after electric guitarist Alenni Davis and bassist Nick Sebastiano joined in as backing vocals. With their first song reaching its conclusion, Doherty addressed the audience about Beach Bunny. “They’ve been good pals,” he said, along with other words of praise to hype up the crowd. Another Michael hopped into their next song, more upbeat and boppable. Each musician had a synth of sorts in front of them, each accomplishing a different goal. Doherty played those traditional techno tones on his keyboard, Davis filled the gaps with a unique, hard to place sound, and Sebastiano handled the booming percussive backdrop. As one of their songs vamped in complexity and severity, Sebastiano swapped from the digital drum track to banging a bongo with a mallet.

Another Michael capitalized on the sound setup. Sebastiano’s bass came to the forefront on some songs, and the mixing intensified its musicality and power. In one instance, the bass rung out with such a weight you could feel the vibrations in your chest, your clothes quaking at the strength of the music. Towards the end of their set, they took a break and engaged with the audience. Sebastiano plugged the bands email, anothermichaelmusic@gmail.com and told fans to send memes to get added to the email list. Davis and Doherty chatted about the vibe while Sebastiano threw gummy bears into the audience. With a swig a kombucha and a smile, Doherty lead Another Michael into “About,” both a personal favorite and their last song for the night. The song ends with a descending vocal harmony from the bandmates, a clean end to a clean set.

House music played as Another Michael quickly deconstructed and headed to the merch table. Songs like “You Found Me” by The Fray initiated a group sing-a-long from the audience, and as “Fire Burning on the Dance Floor” was cut short, they clamored in disappointment. Everyone talked music, ranging from how stellar Another Michael performed to mosh pit etiquette to what makes for good house music. When Beach Bunny began setting up, the conversations ground to a halt and cheers replaced them. Drummer Jon Alvarado jammed on the drums solo to rev up the crowd, amplifying the already electric mood.

“6 Weeks,” the first song of the set and Beach Bunny’s first real song, launched the audience into a hopping frenzy. Lead singer and guitarist Lili Trifilio energized the audience with a distinct opening riff, and the crowd bounced to the beat like bunnies. An immediate applause at the end of the song marked the beginning of Trifilio’s fun interludes. She thanked the audience, praised Another Michael, and asked disembodied voice Zach to tell a dad joke; Zach delivered. She then gave a lead-in to “Dream Boy,” the first released song off of their unreleased album Honeymoon. Though barely three weeks old, the audience was already singing along as if they had known it for years. In between songs, she laughed “Sorry, I’m drunk” to explain some jokish behavior. “February,” a relatively mellow song about what-ifs of a former partner, prompted the first mosh pit of many that night. Beach Bunny played the whole Crybaby EP by following with “Jenny” and “Boys.”

Trifilio took the next interlude to promote Honeymoon, telling fans about the Valentine’s Day release date. Beach Bunny sprang into a couple songs off of Honeymoon. The new album seems to continue along the trajectory of their latest EP, Prom Queen, and fans absolutely adored it. Bassist Anthony Vaccaro also vibed hard with the new material, losing himself in the music and letting his long locks fly while he shredded. Trifilio, a little dehydrated, gave a fan a cup to fill with water. The fan joked “I got her water cup!” before filling it and giving it back to her. Everyone chuckled as the band segued into a cover of “Party in the U.S.A.” by Miley Cyrus. Hands were up as Beach Bunny were playing that song, butterflies basically flew away from the crowd. Trifilio took a moment to reflect, saying she had “Two white claws too many.” In that spirit, she encouraged the crowd to introduce their next tune with a “You already know!”

Hit single “Sports” dialed the audience up to eleven. Much of Beach Bunny’s recorded material has a light, surfy feel to it. Yet, there is a raw energy and vitality that emerges in their live performance which makes an already fantastic song unbelievable. That vibe persisted into “Prom Queen,” another fan favorite. As the concert was nearing its close, Trifilio requested the audience split like the red sea and leave the middle totally empty. As she belted the intro to “Painkiller,” fans forcefully crashed into each other wall of death style. Energy remained sky high until the very last note, and Beach Bunny packed up satisfied. 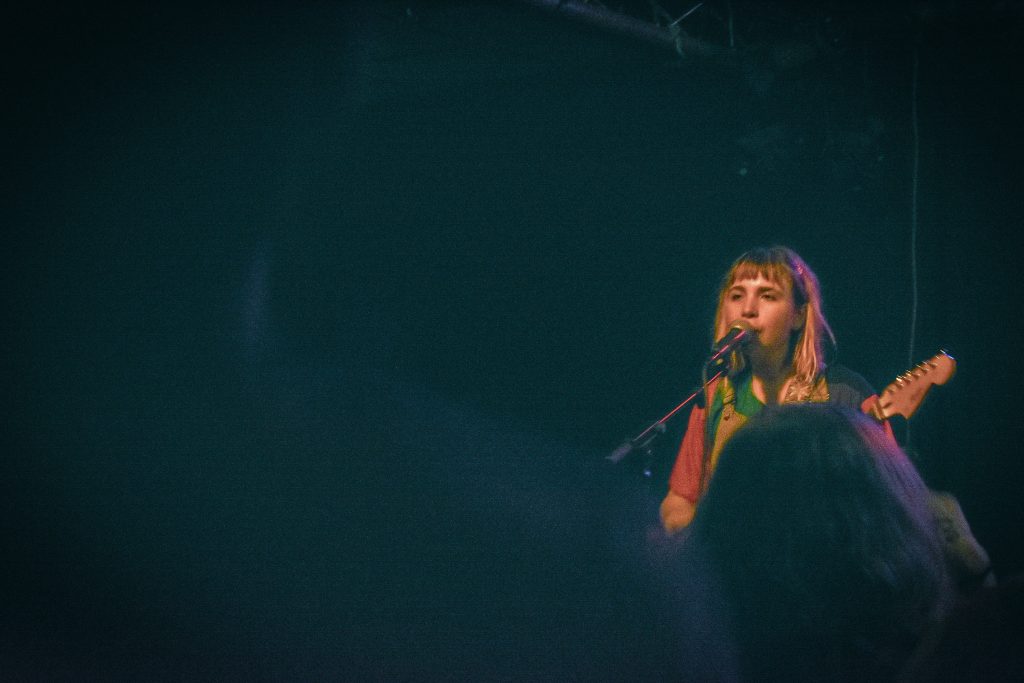 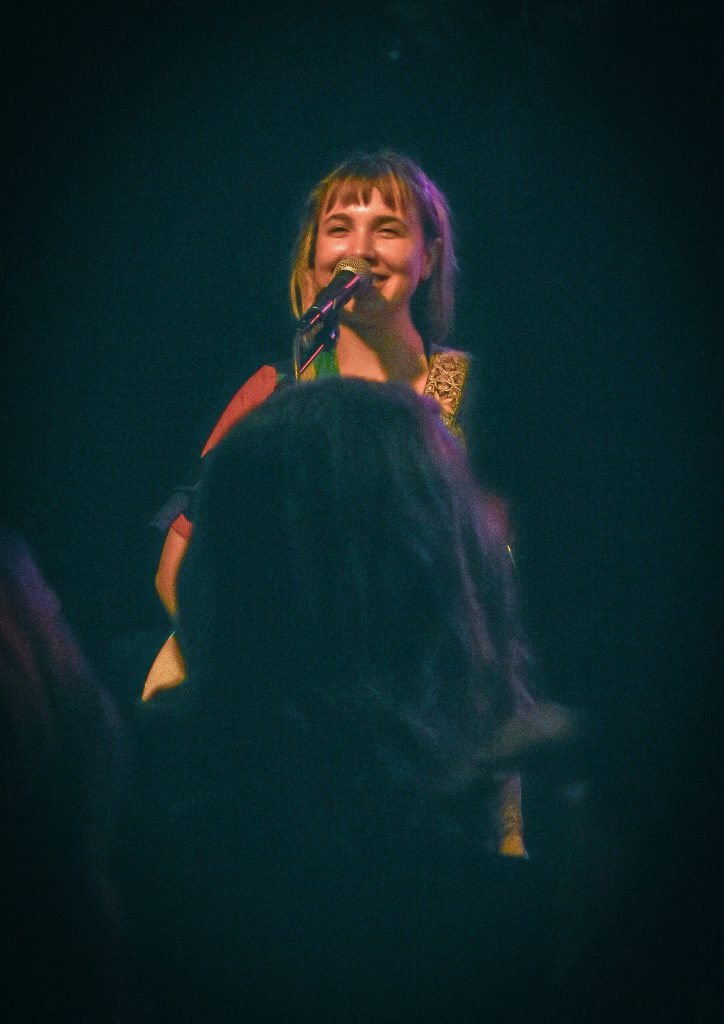 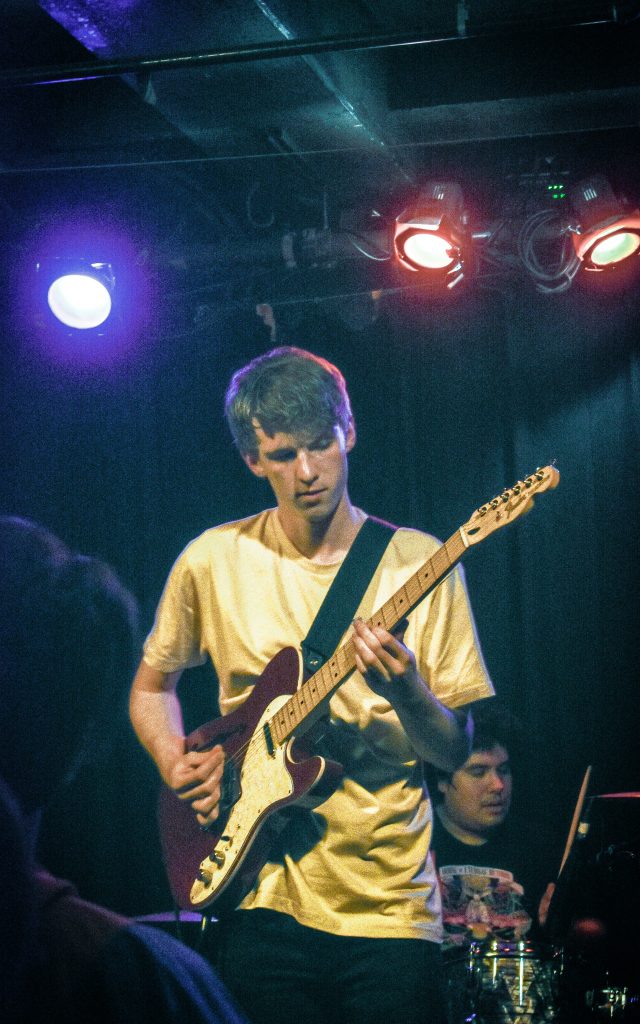 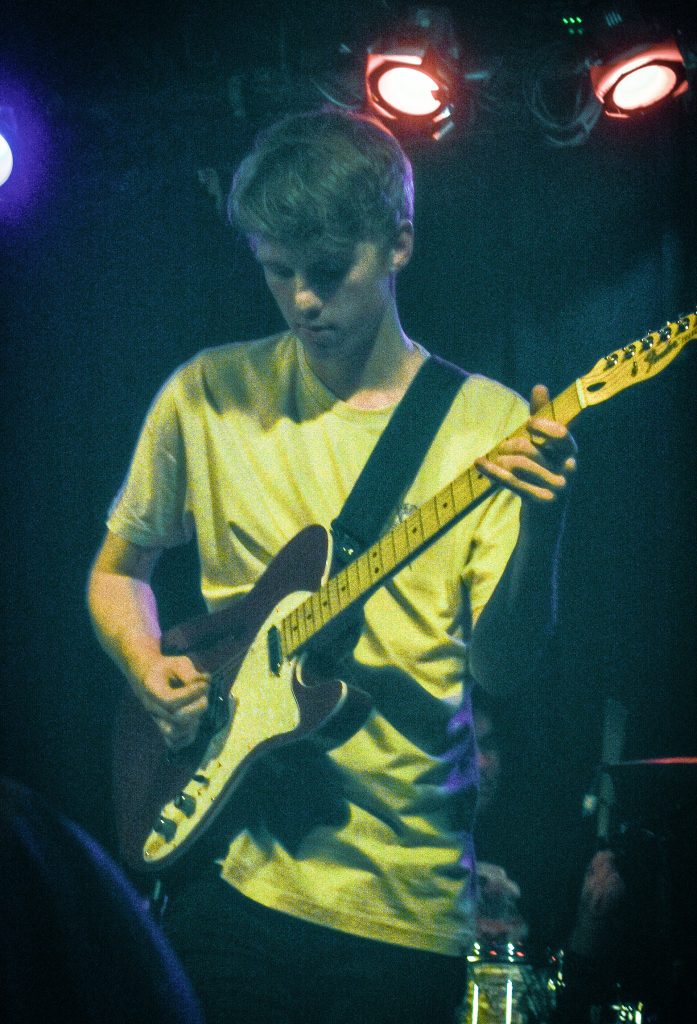 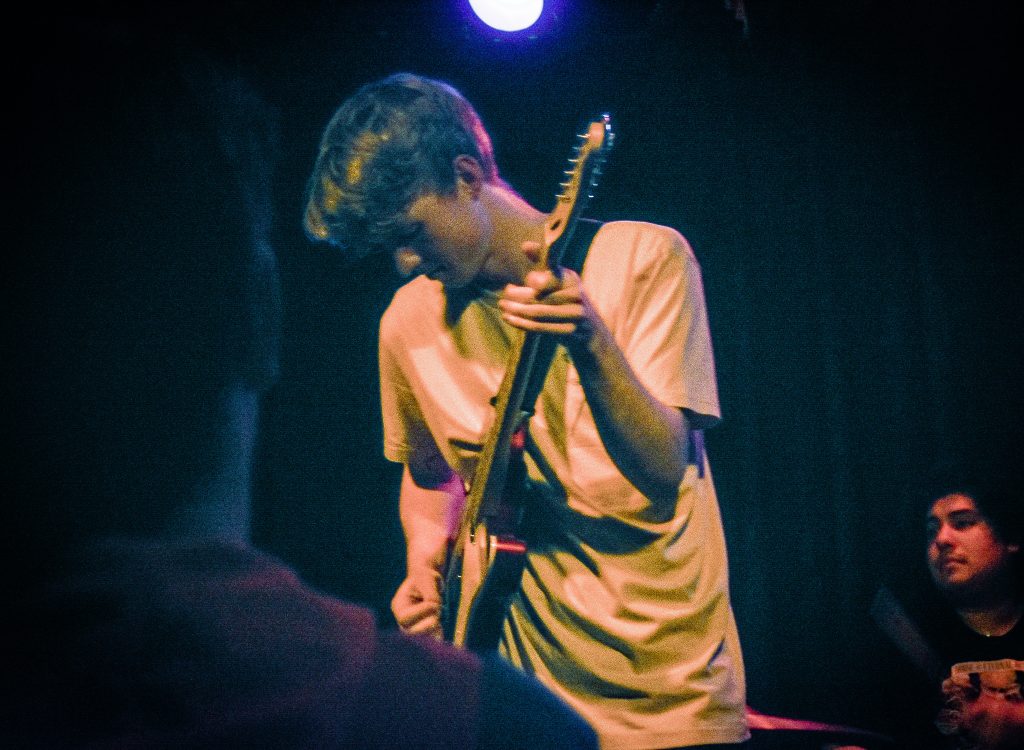 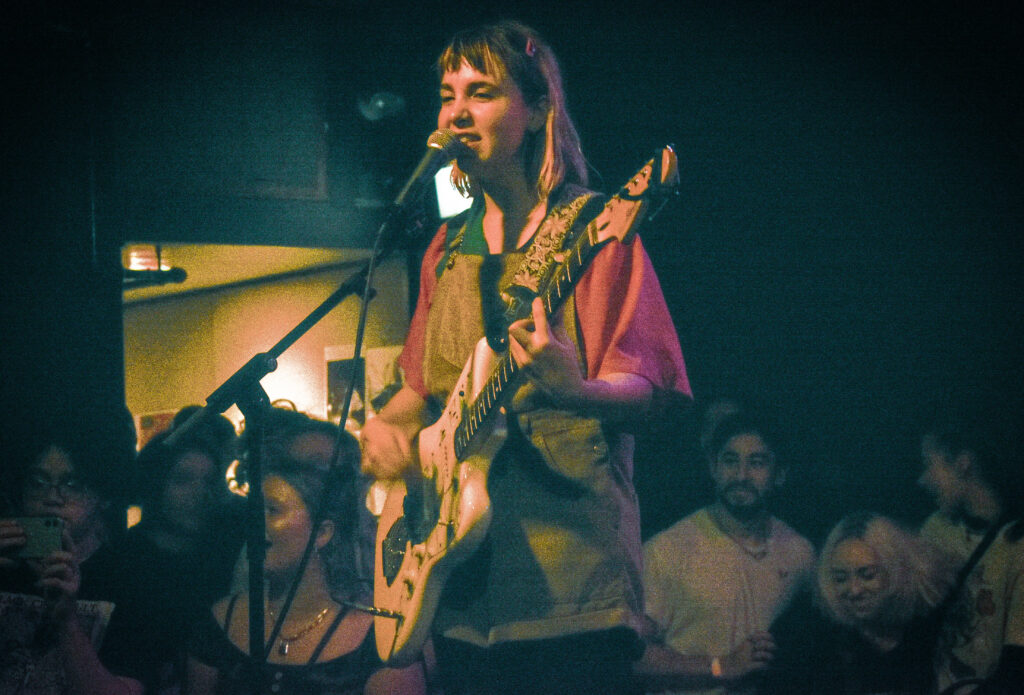 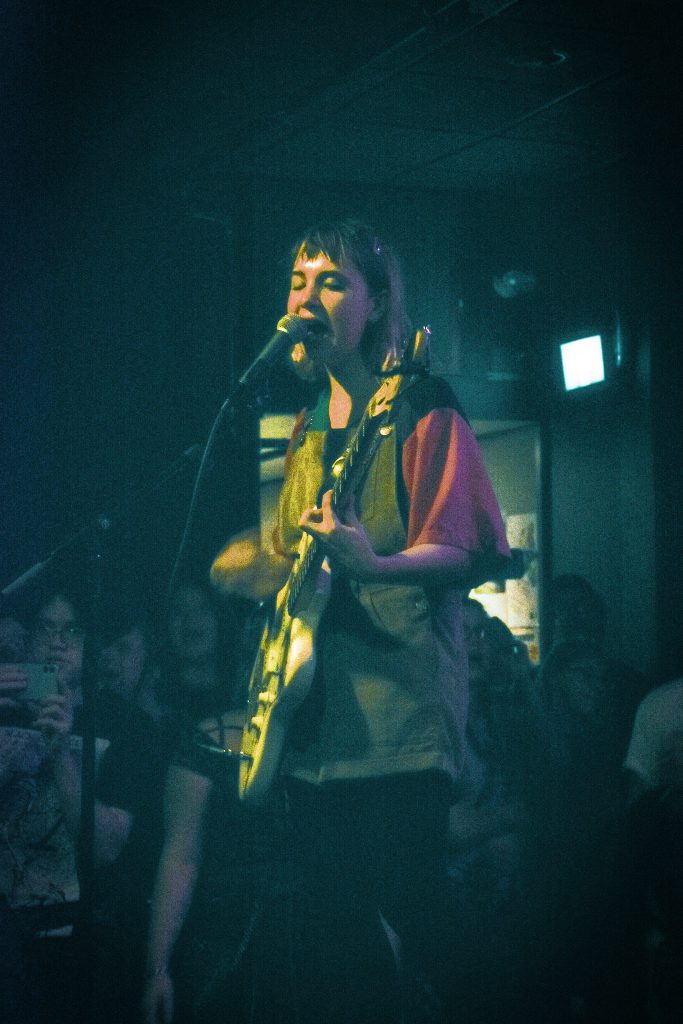 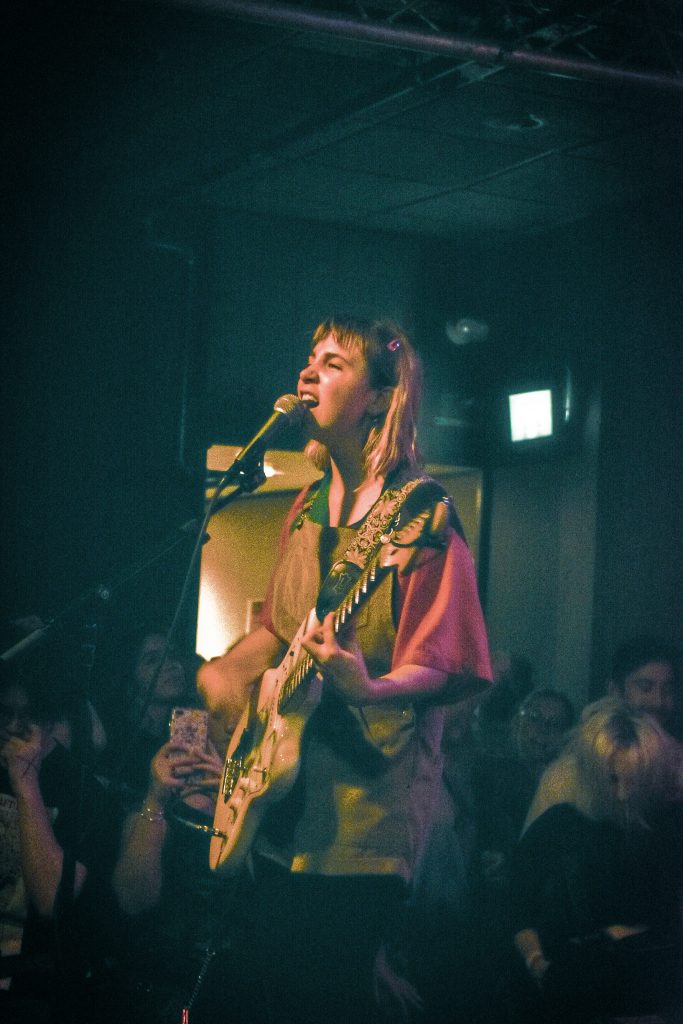