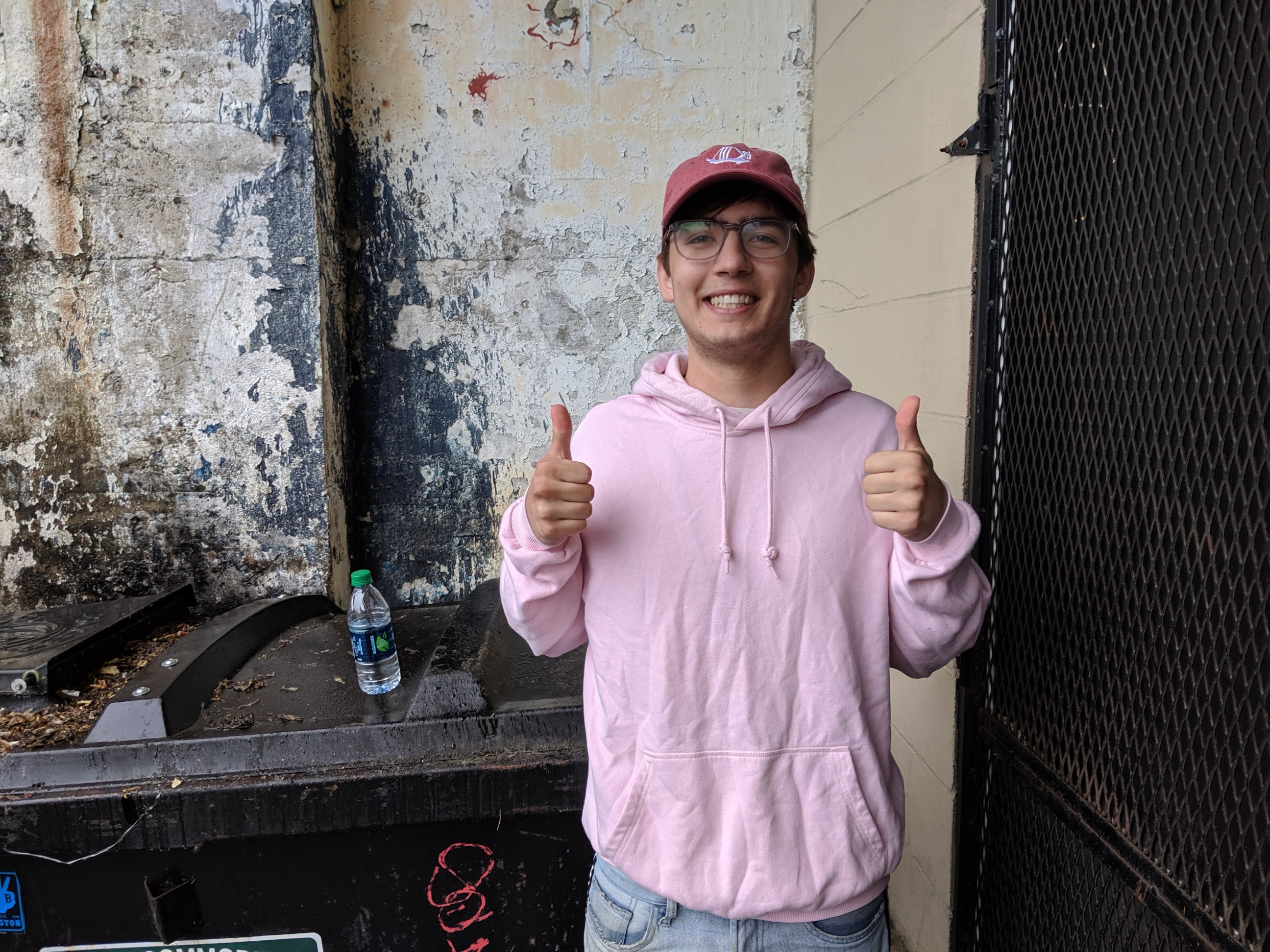 WTBU’s Reed Romanko talked to Fredo Fosco of fredo disco ahead of their show with Hot Mulligan at Brighton Music Hall.

FREDO FOSCO: The tour is going really well! Yeah, we’re really enjoying ourselves. I think this is day thirty two…

FF: A LOT of tour, yeah, over a month so far, so it’s pretty crazy you know? It’s really weird to be in it. But it’s nice! We’re definitely having a good time, we’re having fun, really enjoying what we’re doing.

RR: So, let’s start with the basics, what is Fredo Disco?

FF: So we’re a four piece project. There’s me, Fredo, there’s Colin who plays drums, there’s Max who plays guitar, and Aidan and he plays bass. And so, me and Colin and Max have known each other since we were in middle School. We met each other at a rock academy. I think I was like twelve or thirteen. So we were in a band in that, and then once we got to high school we started our own band. Me and Max when to the same high school (but he’s a year older then me), then Colin went to a high school on the opposite side of town, so we were never all together like that, but we all knew each other.

RR: Off that question, how does that differ from Disco Inc.?

FF: Okay, here’s the whole story. So, we were in this rock academy thing, and then we went into high school and started this band called Clear Confusion, and we were in Clear Confusion for like two years. I started Fredo Disco, which was just like a solo project, just songs I was writing for myself, not the band, just acoustic stuff at first. Max is a year older than us, and when he went to college, Colin started doing percussion for Fredo Disco, and he recorded percussion for the Fredo Disco EPs, and after that Max came back from school for fall break. We went to a Front Bottoms concert, and we were like “Alright, we gotta get the full band back together.” We didn’t want to turn Fredo Disco into the full band right away, because Fredo Disco had a following as an acoustic project. We wanted to ease people into the full band idea, and also we wanted to have a way to experiment with a full band project without putting it under the Fredo Disco name right away.

RR: Yeah, understandable. Don’t want to change to much too quickly

FF: Yeah, so we decided to make the band, Disco Inc. We came up with it Max’s hot tub in his backyard. We were like, “Let’s make Disc inc., Ah!”, “That’s a great idea!” We just wanted to put out an EP, originally an EP and then an album, but the songs that were written on the album were way more Fredo Disco-y, than Disco Inc.-y, so we put them out as Fredo Disco, and Disco Inc. was just one EP, and that was it. It’s kinda like a whole thing, but it’s literally one EP. Our friend Zed from Connecticut, we met him from Reddit. He recorded the bass on that, sent us the stem file, it was awesome. He ended up helping us with the Fredo Disco album as well, cause we didn’t have a bassist at the time we were writing that. Disco Inc. is literally just Fredo Disco with just like all electric guitar songs.

RR: I’d like to talk about Very Cool Music for Very Cool People for a bit. So back in April, you re-released the album with some new songs. Regarding the album as a whole, who were some of your biggest influences?

FF: Obviously The Front Bottoms. They’re a very, very, very good band, like their sounds a lot. Modern Baseball, Hippocampus… oh, Remo Drive! Their punkiness, not necessarily there sound. Their music is very different than ours, but it’s just the feel that they have, the rawness of their stuff. It’s the stuff we listened to around the making of that album.

RR: Can you tell me a bit about the songwriting/composition process for the album?

FF: So, the way that we wrote that album… The first song that was written for it was “Prom, Post-Prom, etc.” Once I wrote this song, I knew this song wouldn’t go on an EP, when we put out an album, this is the first song going on it. Most, actually all, of the songs on that were written on that album I wrote first as an acoustic guitar track. And then I would show it to the rest of the guys, and we would work on it as a whole band. Wooden spoon, we wrote that when I was like fifteen… I wrote that a long time ago. We played that song when we were in high school as Clear Confusion, and then we brought it back for Fredo Disco. That’s an old song.

FF: Yeah, yeah… that was cool to have the time time to flush it out, and finally get it right, literally like four years after writing it, so that was cool.

RR: Cool! So with that, the album included five brand new songs, all great additions by the way. So, why did you put those songs on the re-release rather than your next release?

FF: Because they were written with the same influences. Why would we start a whole new project, either with… Basically, I would either have to write an album with that same kind of sounding songs, and that might get old, or we put out those songs on an album that sounds completely different and sounds jumbled up. I was like, alright, let’s pull the two songs that didn’t really fit the album, “Invincible” which was too slow, and “WebMD” which was kinda heavier. And yeah, we gave it five songs. It’s really four songs, “Cancer and Birth Defects” is really just one song on two tracks. It’s the same story, and I wanted to finish the story of that album.

RR: In that vein of future stuff, do you have anything in the works right now? I know you just put out the re-release, but is there anything on the agenda?

FF: Yeah, we a few singles coming along… We’re gonna go back, write some songs, and then record them.

RR: I gotcha. Is there anything we might hear tonight, or on the rest of the tour?

FF: No, nothing brand new. We got nothing to show off just yet. We just put out an album you know. The next tour we’ll have some stuff.

RR: Alright, last big thing on Very Cool Music for Very Cool People. What message were you trying to communicate to your fans with the album, and your music as a whole really?

FF: I mean, the whole kind of thing with everything that’s been released so far has been mainly stuff that I wrote in High School or very early freshman year of college… when I was in college. What I wanted to get across is that you can just do it. I was just putting stuff out on soundcloud for years. I was like sixteen. There are a lot of sixteen year olds and seventeen year olds making music and want to write this kind of music and do it, but don’t really know what to do with that content. There are ways to put it out there, and do these things so people can hear you, and then you can tour. Like, this is crazy! It’s just crazy that we’re able to do this stuff!

FF: Yeah, and that’s kinda the message I want to get out to the fans. Also, bad shit happens, but then good shit happens too, you know? A lot of the earlier Fredo Disco stuff is sad music, and then Very Cool Music for Very Cool People, the whole idea is have a good time. It’s fun music, about sad stuff sometimes, but still uplifting.

RR: Alright. A little of a veer, y’all recently put out a music video for “Somebody Else” with kayaks, bunk beds, drones, there’s so much going on there. Really great content, really impressive. Aside from being in them, what’s your role in their creation?

FF: Well, we worked with Michael Herrick, he was the director.

FF: Oh yeah, he is the absolute best. He’s super cool, he did both music videos. For the first one, we sat in Colin’s basement, brainstormed storyline ideas. “Prom, Post-Prom, Etc.” is a clear story, so we wanted a music video to be a story along with it. For “Somebody Else,” we kinda did the exact same thing. We went to Colin’s basement, we brainstormed, you get high, you brainstorm. We came up with that idea, that’s Colin’s childhood lakehouse, when he was younger, this song’s about taking care of yourself, doing you for a little bit, so let’s go there. Besides that, all the color coordination, everything, that’s all Michael Herrick. We come up with the stuff together, and he just makes all the things that we say happen. He’s very good, we could not have made it without him.

RR: Going back to some of your earlier releases, why is the chorus of “Shower Song” a minute and twenty seconds?

FF: The chorus of “Shower Song” actually isn’t a minute and twenty seconds. That’s the intro, but do you want to know the story?

FF: When we recorded that EP, there was a little soundbite that the engineer put there. We were talking about the song “Wooden Spoon.” We recorded an acoustic demo of it, the song used to be six minutes and thirty seconds, because the chorus for it used to be a minute and twenty seconds, and there were three or four choruses in that song! When we’d play that song in high school, Max would make so much fun of me for that, and I was imitating him when we were recording that. “Why is your chorus a minute and twenty seconds?” and then he put it on there.

RR: That’s a fun story! Anyway, there’s a number of songs on your soundcloud that you can’t really find on spotify or other mainstream streaming services. Why is that, exactly?

FF: You know how when you look at The Front Bottoms, or Modern Baseball, or all those kinds of bands that like people get into really on the internet. You can look them up on youtube, and there’s tons of back catalogues, and old versions of songs, and unique versions. When I was in high school, in my head I thought, “I’m gonna make a sound cloud with just a bunch of badly recorded songs, because maybe some day people will enjoy them.” So yeah, that’s why they’re just there, you know? It’s like a gem, you have to look into it a little bit, and when you get there, it’s like, “holy shit! There’s a bunch of songs here!”

FF: Exactly! I like when bands did that, so I did it.

RR: Alright, so last thing, any parting words to the fans?

FF: Thank you for being real supportive for all the things! Most of this stuff before tour has been, everything has been on the internet. It’s a really weird concept! Because… it’s the internet! It’s something everyone seems to kind of discredit, and all of these random people who have been supporting us for years are now coming to our shows and they’re very nice people. It’s really nice to meet them, talk to them, and appreciate them, so thanks for that!