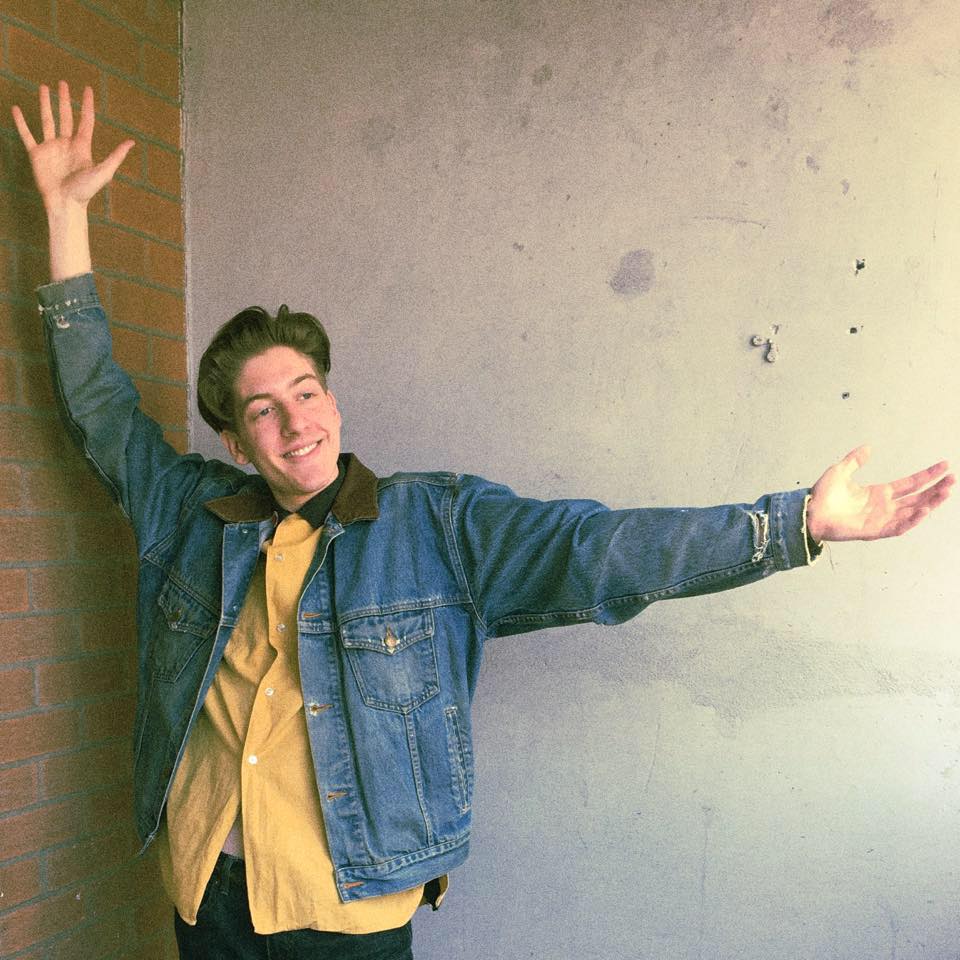 Ian Ruhala has spent the summer in a much different way than many of his college-age peers–by skyrocketing to Spotify success and heading on his first ever headlining tour across the US and Canada. His wavy indie rock feels akin to that of the Walters, Her’s, and BOYO, but Ruhala’s music is ultimately his own refreshing style. Having operated under the band name Hala for the past few years, Ruhala has released the album Spoonfed (2016) as well as a plethora of singles and EPs. WTBU DJ Monica Sucic spoke with him before his show at O’Brien’s on July 10.

Ian Ruhala: Good! This is day 16 or 17, so we’ve been out for a minute. We’re all a little tired, but we’re having fun. It’s been my band and BOYO; it’s been fun hanging out with those guys and getting to know them.

MS: What’s been your favorite tour stop so far?

IR: We played in New York last night, and that was really cool. Alex Wolff was there, from the Naked Brothers Band and some other movies. He stayed for a couple of my songs and I saw him dancing. I consider him to be an early inspiration for a lot of youngsters getting into music. [Laughing] I remember being like 10, watching him, and being like “This kid’s 6 years old and he’s jamming so hard!” New York was cool, and Atlanta was very, very cool. Richmond, Virginia was also very cool. There were a lot of people there who were moshing, too. My music doesn’t really call for that but… sometimes!

MS: How did you connect with BOYO?

IR: Through Biker Gang Booking, the agency that we’re both on. I went out to LA for my birthday in May and I met up with Robert, and we built up a repore.

MS: Where do you get most of your inspiration for music, besides Naked Brothers Band?

IR: The internet, my dad maybe? My dad was the first person to give me a guitar and say “Play this, it’s fun!” He’s in a classic rock cover band. He turned me on to some really good music, like ‘70s southern rock. I like a lot of old music and a lot of new music as well, and I want to make music that blends both of those times, so that it’s applicable to anybody and accessible to anybody. An old person can get down to it, Alex Wolff can get down to it, my 12 year old sister can be like “This song is fun!”

MS: Which artist had the most impact on you growing up?

IR: The Who were my favorite band when I was growing up. The energy of that band was really inspirational for me at an early age. There’s a video of me in the fifth grade covering “My Generation.” I did a knee slide at the end. Watching [The Who] and all the crazy characters in it was inspirational to me to pick up other instruments. I was more on a classic rock kick when I was younger.

MS: If you could collaborate with any artist, living or dead, who would it be?

IR: Paul McCartney. 100%. He’s the greatest. Ever. I kinda want to change my answer from earlier, with The Who to Paul McCartney, just for the fact that he could play every single instrument and get around any kind of instrument. A couple months ago, I heard his record McCartney 2 and he recorded the whole thing, engineered the whole thing, did all the instrumentation all by himself. It was one of the first bedroom recording records ever done. The record is crazy and really experimental. After hearing that, I knew number one, he was my favorite Beatle and number two, I would just love to pick his brains. Or have him play guitar on a track. He’s old, but he’s still got it. He’s still so relatable and so cool. I just want to meet him and have him critique me. I think that would be so fruitful.

MS: If you could get any tattoo for any artist, album, or song, what would it be?

IR: I don’t really think I’m ever going to get a tattoo, but if I had to get one it would be the Stray Cats logo right on my arm. I think I would get matching ones with my dad. I don’t really like tattoos that much. My ideas of what I like change so quickly.

MS: What are some of your favorite parts of your local music scene in Detroit?

IR: There are a few bands that are very good: Zilch, Legume, Brother Son, Anna Birch–she’s a dear friend of mine and she’s killing it right now. I like how eclectic it is, in a sense. Everybody is doing something a little different. There’s give and take to that. It doesn’t create a rooted scene where everybody can thrive and build off of each other; it’s weird pockets of sketchy indie kids, rappers, and people that still want to be the White Stripes. The music is really abundant, but it feels like there’s nowhere for it to go. Sometimes it feels like you’re trapped, because there’s no platform for a lot of young artists to get their stuff out there without outsourcing. I would like to see some of it change in order to benefit the artists so they can stay there and make something out of it. It would be a waste of talent, especially with how good the bands are around there. It would be a tragedy if nothing came of it, because it’s just a strange, little, crazy city.

MS: What’s your opinion on using streaming services to build a career in the industry?

IR: I love it. I wouldn’t be doing anything if it wasn’t through Spotify. Everyone mentions that I was in their Discovery Weekly or they saw me on a playlist or something. It’s crazy to me. A good example of it would be “What is Love? [Tell Me, Is It Easy?]”; at the beginning of the year it had about 500,000 streams and I was going to school, chipping away at songs: “I’d be happy if it stayed at 500,000 forever, I guess.” But it gets on one playlist and it goes up to 1 million, and now it’s almost at 2 million! It’s crazy how the internet works and how streaming works. I don’t know what I did to facilitate that happening. It’s interesting, and I’m trying to figure out how to recreate that situation and make it even more extreme. Streaming is a hard thing to understand, and I don’t think you’re meant to understand it. There’s mystery in it. I owe pretty much everything to Spotify and YouTube, Apple Music and iTunes. It’s a nice reminder that people are listening to my music and getting something out of it. There definitely need to be some big changes in it to make it benefit the artists, but it’s cool.

MS: What are your plans for the future, musically or otherwise?

IR: When we go home, I’m gonna sleep. I’m gonna sleep like a rock. I think I’m gonna do another record and maybe do some weird adventure up in north Michigan. I wanna do a Bon Iver kind of thing where I just make music and see what happens. I just want to make more music before school starts. You gotta get that education. Stay in school, don’t do drugs, and party hard in between. But not on drugs.

[This interview was edited for length and clarity.]