Welcome to the Jeffries-EL Research Group 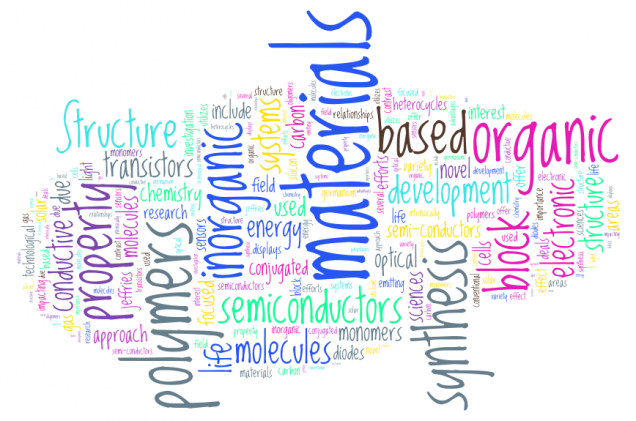 Organic semiconductors are a unique class of materials that combine the processability of organic materials with the optical and electronic properties of semiconductors. These complex materials impact several areas of technological importance including energy (solar cells), displays, (light emitting diodes), electronics (field effect transistors), and health (sensors). These carbon-based small molecules, oligomers or polymers that were initially envisioned as replacements for silicon and rare-earth metals based semiconductors widely used today. However, organic materials can be used to produce devices with properties that cannot be attained with inorganic materials, such as color tuning and fabrication on irregular surfaces. Although there are many known organic semiconductors issues such as the scalability of chemical synthesis, elimination of defects within the materials and overall improvements in performance need to be addressed allow for advancements in the large-scale manufacture of ”plastic” electronics. Drawing upon my formal training in the area of organic chemistry, I am able to employ an atomic level approach toward developing new organic semiconductors.

Videos from the Jeffries-EL group

Take a tour of the Jeffries-EL lab!

Nova: Beyond the Elements We owe a lot to science! In support of our Nova’s fund raising campaign— professor Jeffries-EL shares with you why she has reason to say #ThankYouScience.

Super Science Tuesday Boston University– Throughout the 2016 presidential campaign, The Science Coalition is asking people to answer the question: Why should science matter to the presidential candidates? For more information, visit www.ScienceMatters2.me.