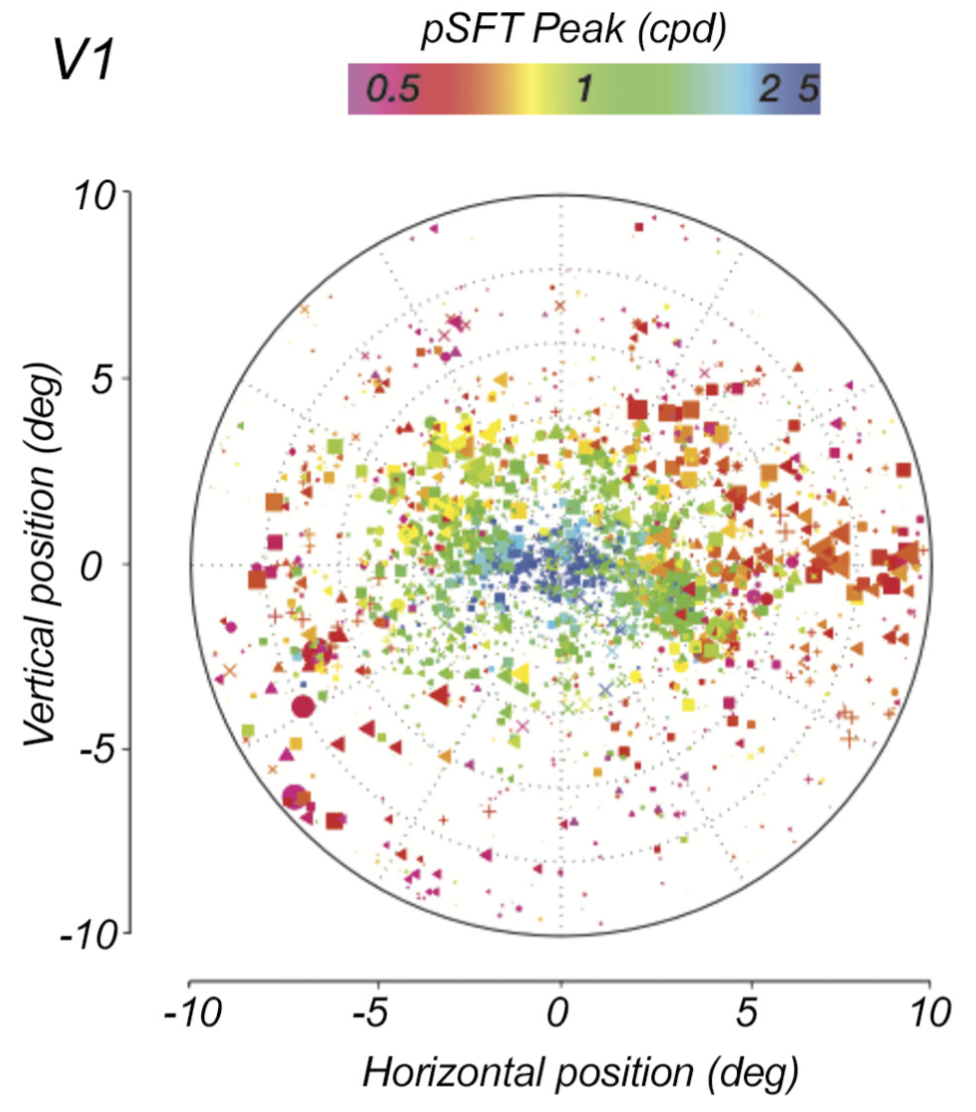 Neurons within early visual cortex are selective for basic image statistics, including spatial frequency. However, these neurons are thought to act as band-pass filters, with the window of spatial frequency sensitivity varying across the visual field and across visual areas. Although a handful of previous functional MRI studies have examined human spatial frequency sensitivity using conventional designs and analysis methods, these measurements are time consuming and fail to capture the precision of spatial frequency tuning (bandwidth). In this study, we introduce a model-driven approach to fMRI analyses that allows for fast and efficient estimation of popu- lation spatial frequency tuning (pSFT) for individual voxels. Blood oxygen level-dependent (BOLD) responses within early visual cortex were acquired while subjects viewed a series of full-field stimuli that swept through a large range of spatial frequency content. Each stimulus was generated by band-pass filtering white noise with a central frequency that changed periodically between a minimum of 0.5 cycles/degree (cpd) and a maximum of 12 cpd. To estimate the underlying frequency tuning of each voxel, we assumed a log- Gaussian pSFT and optimized the parameters of this function by comparing our model output against the measured BOLD time series. Consistent with previous studies, our results show that an increase in eccentricity within each visual area is accompanied by a drop in the peak spatial frequency of the pSFT. Moreover, we found that pSFT bandwidth depends on eccentricity and is correlated with the pSFT peak; populations with lower peaks possess broader bandwidths in logarithmic scale, whereas in linear scale this relationship is reversed. 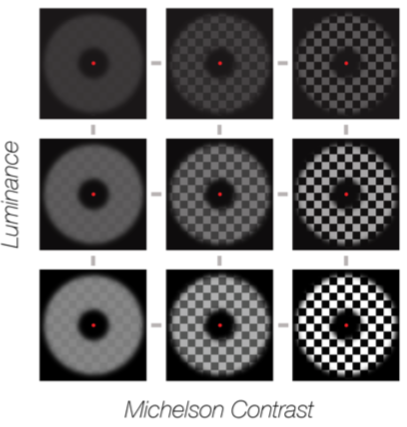 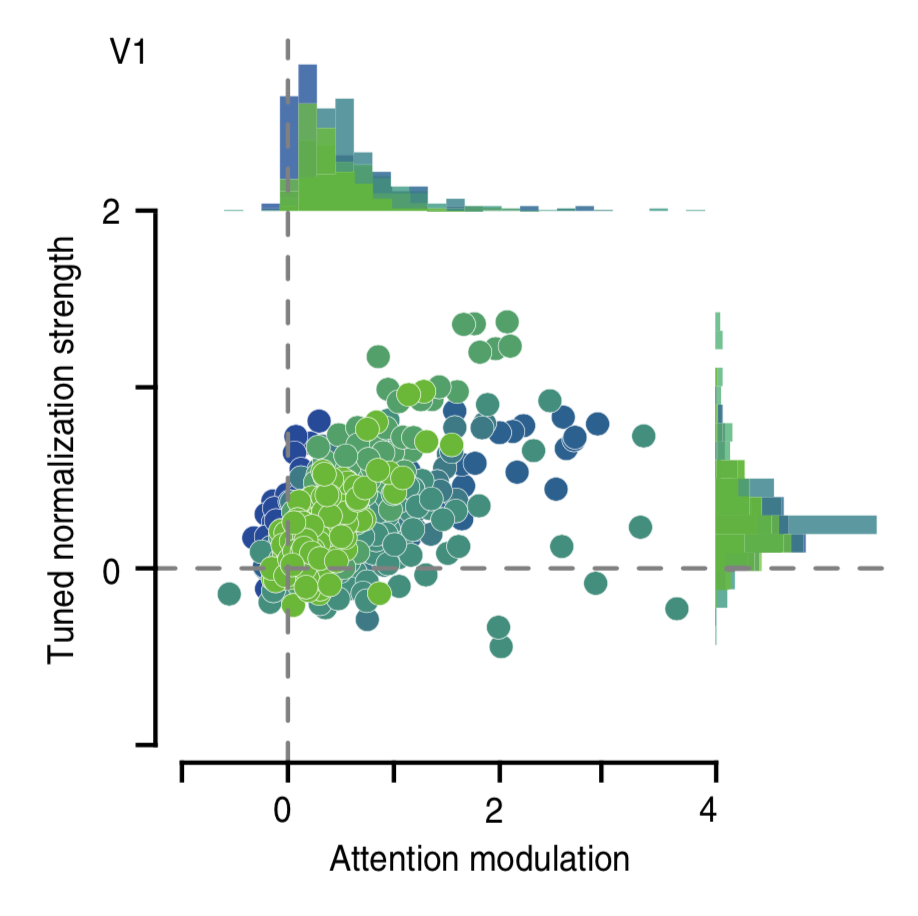 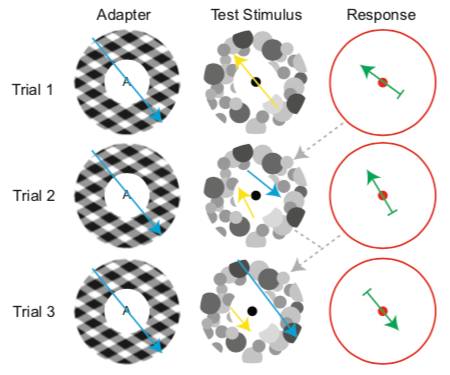 The Ling Lab (http://sites.bu.edu/vision) at Boston University is seeking a postdoctoral researcher, with a flexible start date.

This position, funded by National Eye Institute, is part of a collaboration between Dr. Sam Ling (http://sites.bu.edu/vision) and Dr. Jan Brascamp (https://psychology.psy.msu.edu/brascamplab/). The position would involve using state of the art fMRI techniques to investigate the neural computations subserving early visual processing, and how they interact with processes such as attention and interocular suppression.  Research methods that are currently employed in the lab include fMRI, EEG, psychophysics, and computational modeling. The Ling Lab is part of Boston University’s Department of Psychological and Brain Sciences (www.bu.edu/psych), and is affiliated with the Center for Integrated Life Sciences and Engineering, and the Center for Systems Neuroscience. The Brascamp Lab is part of Michigan State University’s Department of Psychology (https://psychology.msu.edu), and is affiliated with MSU’s Cognitive Science Program and Neuroscience Program.

Applicants must have a Ph.D. in neuroscience, psychology or related fields, and should possesses a strong programming background.  Prior experience with neuroimaging or advanced psychophysical techniques is highly preferred. The position is available immediately and applications will be reviewed until the position is filled.

Application should include: a CV, a brief statement of research interests, the expected date of availability, and the names and contact information for three referees. For more information about this position, contact Dr. Sam Ling at samling@bu.edu. 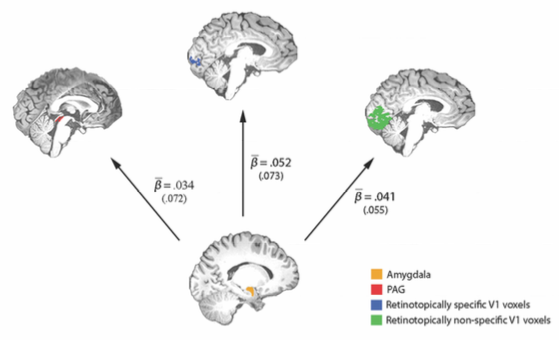 An adaptive response to threat requires optimized detection of critical sensory cues. This optimization is thought to be aided by freezing - an evolutionarily preserved defensive state of immobility characterized by parasympathetically mediated fear bradycardia and regulated by the amygdala-periaqueductal grey (PAG) circuit. Behavioral observations in humans and animals have suggested that freezing is also a state of enhanced visual sensitivity, particularly for coarse visual information, but the underlying neural mechanisms remain unclear. We induced a freezing-like state in healthy volunteers using threat of electrical shock and measured threat-related changes in both stimulus-independent (baseline) and stimulus-evoked visuocortical activity to low- vs. high-spatial frequency gratings, using functional MRI. As measuring immobility is not feasible in MRI environments, we used fear bradycardia and amygdala- PAG coupling in inferring a freezing-like state. An independent functional localizer and retinotopic mapping were used to assess the retinotopic specificity of visuocortical modulations. We found a threat- induced increase in baseline (stimulus-independent) visuocortical activity that was retinotopically nonspecific, which was accompanied by increased connectivity with the amygdala. A positive correlation between visuocortical activity and fear bradycardia (while controlling for sympathetic activation), and a concomitant increase in amygdala-PAG connectivity, suggest the specificity of these findings for the parasympathetically dominated freezing-like state. Visuocortical responses to gratings were retinotopically specific but did not differ between threat and safe conditions across participants. However, individuals who exhibited better discrimination of low-spatial frequency stimuli showed reduced stimulus-evoked V1 responses under threat. Our findings suggest that a defensive state of freezing involves an integration of preparatory defensive and perceptual changes that is regulated by a common mechanism involving the amygdala. 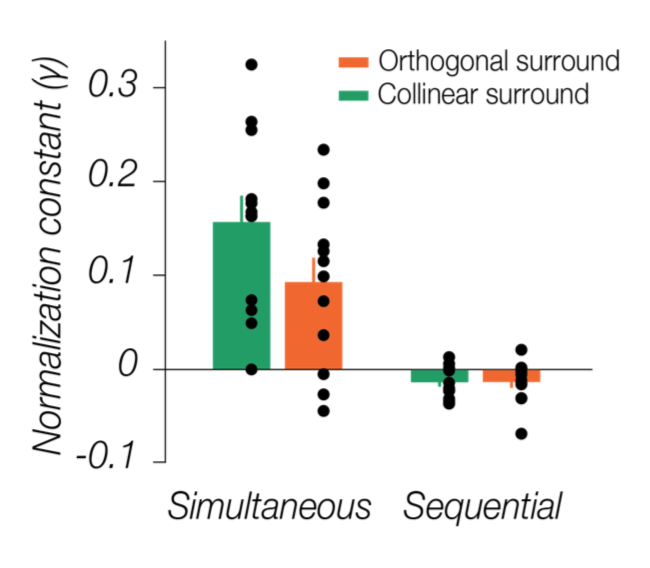 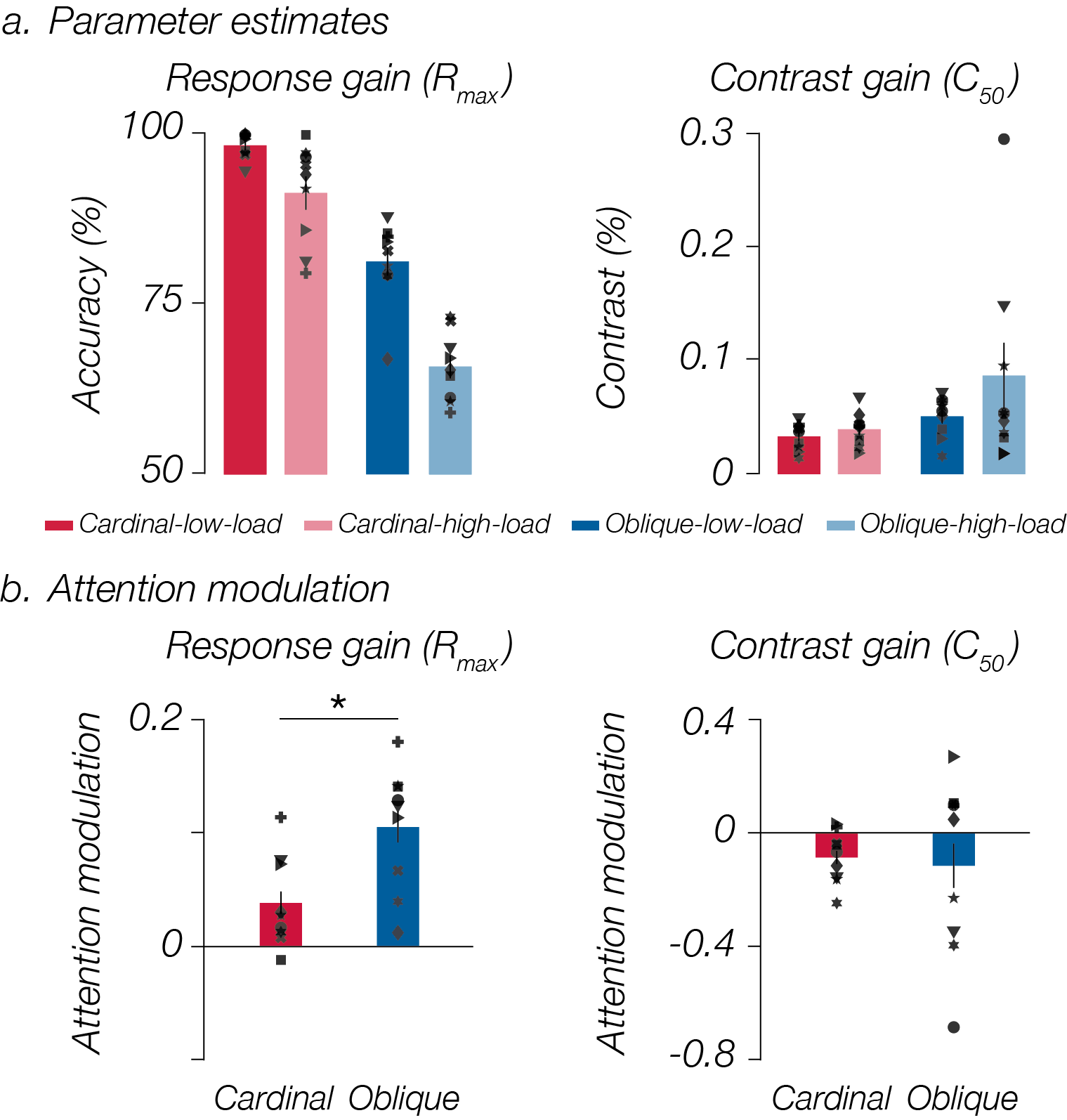 visual system employs a sophisticated balance of attentional mechanisms: salient stimuli are prioritized for visual processing, yet observers can also ignore such stimuli when their goals require directing attention elsewhere. A powerful determinant of visual salience is local feature contrast: if a local region differs from its immediate surround along one or more feature dimensions, it will appear more salient. Here, we used high-resolution fMRI at 7T to characterize the modulatory effects of bottom-up salience and top-down voluntary attention within multiple sites along the early visual pathway, including visual areas V1-V4 and the lateral geniculate nucleus (LGN). Observers viewed arrays of spatially distributed gratings, where one of the gratings immediately to the left or right of fixation differed from all other items in orientation or motion direction, making it salient. To investigate the effects of directed attention, observers were cued to attend to the grating to the left or right of fixation, which was either salient or non-salient. Results revealed reliable additive effects of top-down attention and stimulus-driven salience throughout visual areas V1-hV4. In comparison, the LGN exhibited significant attentional enhancement but was not reliably modulated by orientation- or motion-defined salience. Our findings indicate that top-down effects of spatial attention can influence visual processing at the earliest possible site along the visual pathway, including the LGN, while the processing of orientation- and motion-driven salience primarily involves feature-selective interactions that take place in early cortical visual areas. 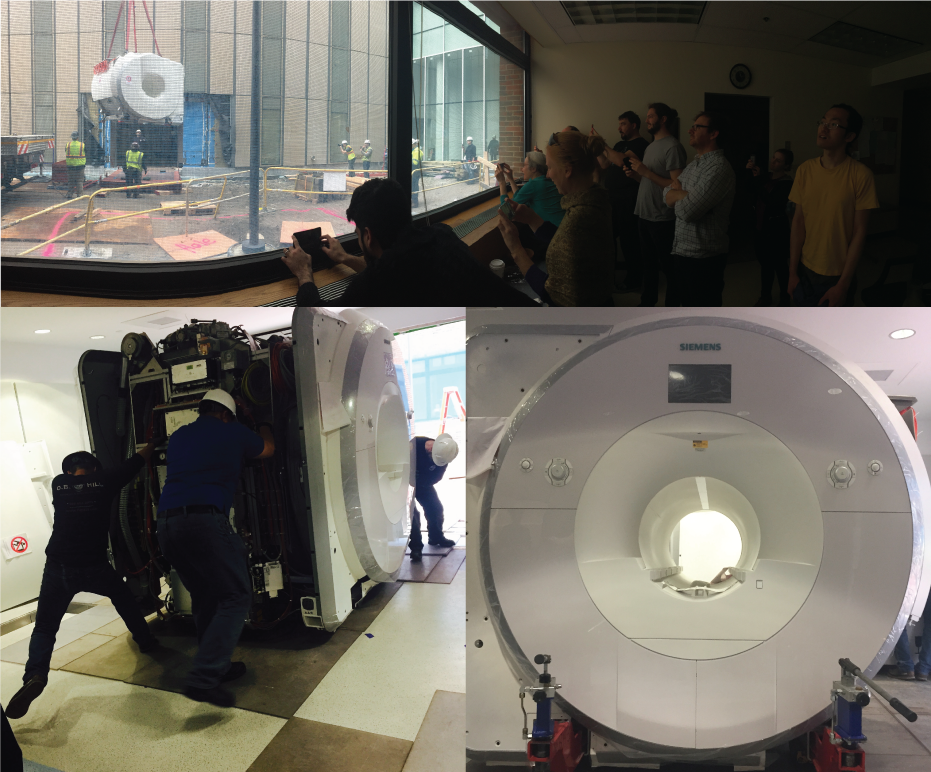 Timelapse of the install (courtesy of Louis Vinke) 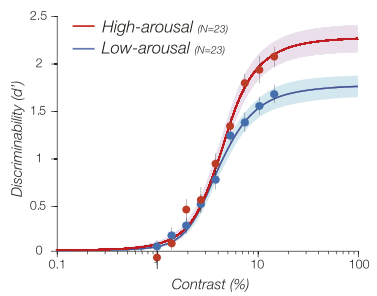 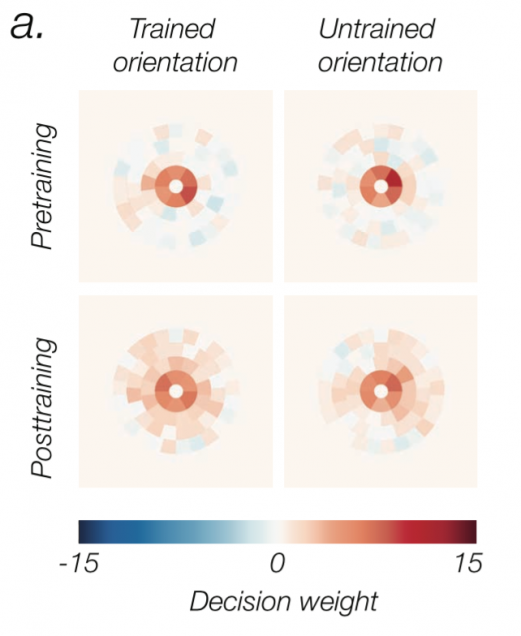 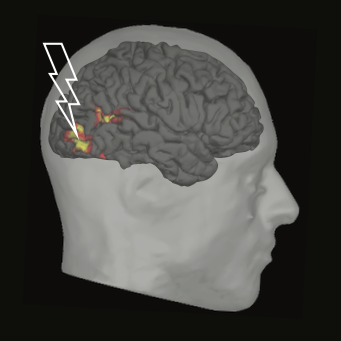 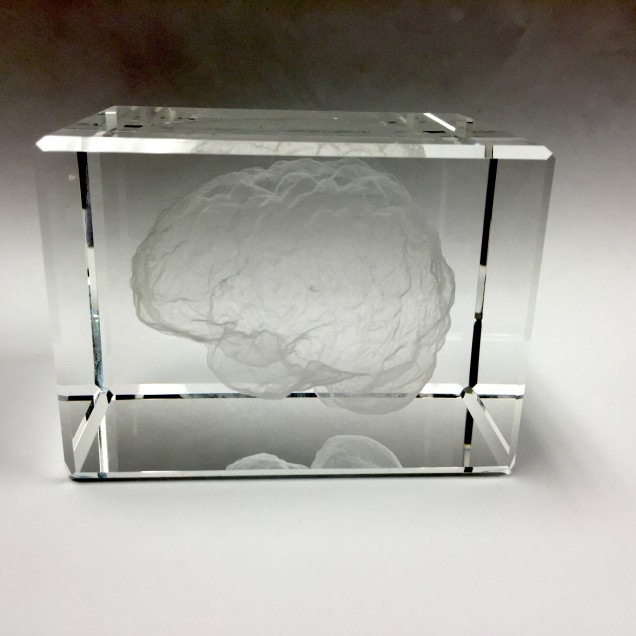