Pronatalism and Population Management in Russia 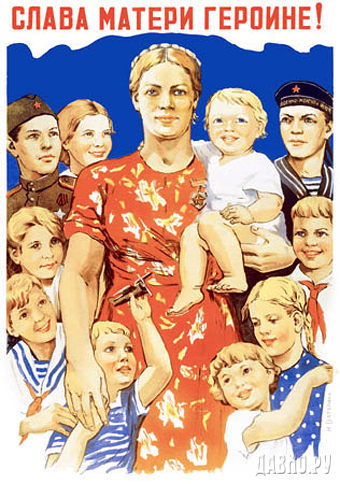 "Glory to the Mother-Heroine!" Propaganda poster on a Soviet mother’s duty to the state. (1944)

This research guide provides a further study into the topic of pronatalism and population management in Russia specifically focusing on the changes that occurred in the state control of population during the period between the First and Second World Wars.  This guide with look further into the changing idea of motherhood from the October Revolution of 1917 to the Stalinist period and how this took affect during the 1930s; transforming social pressures into state policy.

The October Revolution of 1917 brought with it high hopes for the liberation of woman. The radical Bolshevik  government initially denounced the family and the institution of marriage, calling it a bourgeois institution. Yet by the 1930s Soviet Culture embraced the strong Soviet family; glorifying motherhood, and strove to dramatically increase the birthrate. Under Stalin, the Soviet government enacted polices that outlawed abortion and made it increasingly difficult to divorce. 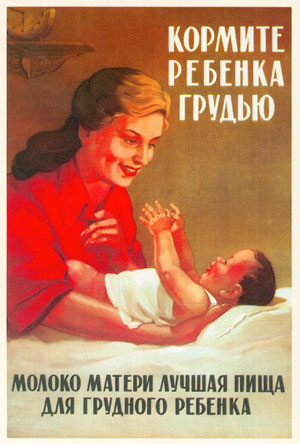 "Breastfeed your baby; Mother’s milk is the most nutritious."

David, Henry Philip. From Abortion to Contraception: A Resource to Public Policies and Reproductive Behavior in Central and Eastern Europe from 1917 to the Present. Vol. 1. Greenwood Publishing Group, 1999.

Background on the life of a Soviet Woman:

Engel, Barbara Alpern , and Anastasia Posadskaya-Vanderbeck. A Revolution of Their Own. Boulder CO: Westview Press, 1998.

Pronatalism in a Broader Context: